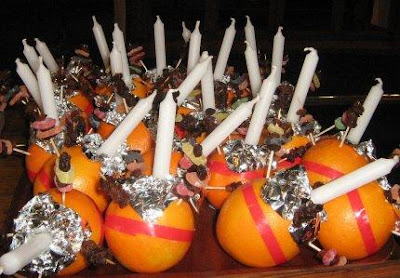 As part of my spiritual reflections for Advent this year, I am looking at an appropriate hymn for Advent each morning. This morning [9 December 2014], I have chosen the Christingle hymn, ‘Round orange, round orange, you serve as a sign’ (No 178).

This is one of two Christingle hymns the Church of Ireland includes in the Church Hymnal: ‘It’s rounded like an orange’ (No 165) and ‘Round orange, round orange, you serve as a sign’ (No 178). Although they are Advent hymns, they are included among the Christmas hymns in the hymnal with an Incarnation theme.

During my two recent lectures on Advent Spirituality, I spoke of the Christingle service as a valuable resource for parishes and churches. A Christingle is an orange surmounted by a lighted candle and decorated with fruit and a red ribbon. This is a Moravian tradition that was introduced to Anglicans in recent years. It was developed by the (Church of England) Children’s Society, and has become increasingly popular in the Church of Ireland. 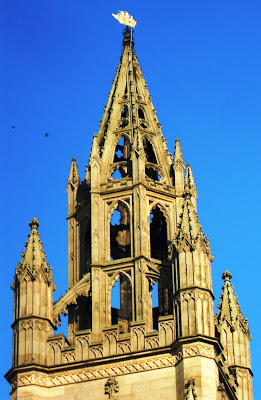 Saint Nicholas’s Church – also known as the “Sailors’ Church” – is the parish church of Liverpool ... Nick Frayling was the rector when he asked Elizabeth Consett to write ‘Round orange, round orange, you serve as a sign’ (Photograph: Patrick Comerford)

This hymn in 1989 was written by Elizabeth Consett, a hymn-writer and teacher in Saint Catherine’s College, Liverpool, in response to a request from the Rector of Liverpool, Canon Nicholas Frayling, then Precentor of Liverpool Cathedral, for a suitable hymn to be sung at a Christingle service.

The hymn was first sung later that year at a special service in Coventry Cathedral to mark the 21st annual Christingle service of the (Church of England’s) Children’s Society.

The tune Lourdes is a traditional French is a simple and memorable tune that lends itself to being sung by solo children’s voices, with the whole congregation joining in for the refrain. This Pyrenean folk tune is associated by many Roman Catholics with processional hymns sung by pilgrims in Lourdes and with the song ‘The Bells of the Angelus.’

The verses of this hymn follow the process of creating a Christingle, using an orange and the other symbolic decorations. As the Christingle is created, verses 1 to 4 may be sung one at a time, preceding or following each stage of the activity. Then the whole hymn (verses1 to 5) can be sung at the end.

The hymn is rich with symbolism that coincides with the symbols used in the hymn. The orange represents the world. The red ribbon indicates the love and blood of Christ. The dried fruits and sweets are symbols of God’s creations. The lit candle symbolises Christ, the light of the world.

Round orange, round orange, you serve as a sign
That God made the round world with purpose divine.

The power of love is always the same:
Be glad, give thanks, rejoice in God’s name.

Red ribbon, you tell of the bloodshed and pain.
Which led to forgiveness when Jesus was slain.

Ripe fruits freely given, this truth you recall,
When God hands out presents they’re meant for us all.

Bright candle, the message you carry is clear,
The true light from God found a home with us here.

Christingle, Christingle, shine out in the night.
To kindle among us that marvellous light,