Being sent out like ‘lambs into the midst of
wolves’ with ‘no purse, no bag, no sandals’ 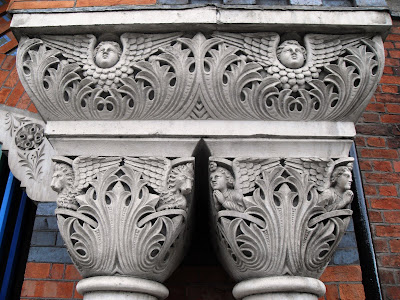 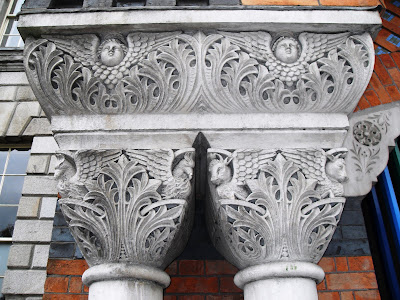 Saint Luke among the Gospel writers … sculpted representations of the Four Evangelists at University Church, Dublin: Saint Mark (the winged lion) and Saint Matthew (the angel) above; and Saint John (the eagle) and Saint Luke (the winged ox) below (Photographs: Patrick Comerford)

I wonder whether any of you who are Third Year students here this week find the Gospel reading this morning (Luke 10: 1-9) has any resonances with your deacon internships: “See, I am sending you out like lambs into the midst of wolves. Carry no purse, no bag, no sandals; and greet no one on the road (verses 3-4).”

This morning we remember and give thanks for Saint Luke (Λουκάς) the Evangelist, traditionally remembered as the author of the Third Gospel and of the Acts of the Apostles.

I have never quite worked out why Saint Luke among the four evangelists is traditionally represented in Church architecture and art as a winged ox. But I find he is an interesting Biblical figure not just as an evangelist, but as writer who provided fascinating accounts of his travels – in all he names 32 countries, 54 cities and nine islands – and as a key figure in the tradition of icons and iconography.

Although he is not one of the Twelve, Saint Luke figures throughout the New Testament. Apart from the Gospel he gives his name to and the Acts of the Apostles, he is also mentioned in the Epistle to Philemon (verse 24), Colossians 4: 14 and II Timothy 4: 11, which is part of this morning’s Epistle reading.

Later traditions claimed Saint Luke was one of the Seventy who figure in our Gospel reading, that he was one of the disciples on the road to Emmaus, or even that he was closely related to the Apostle Paul. But Saint Luke, in his own statement at the beginning of the Acts of the Apostles, tells us he was not an eyewitness to the events of the Gospel. On the other hand, he repeatedly uses the word “we” as he describes Saint Paul’s missions in Acts, indicating he was personally there so many times. 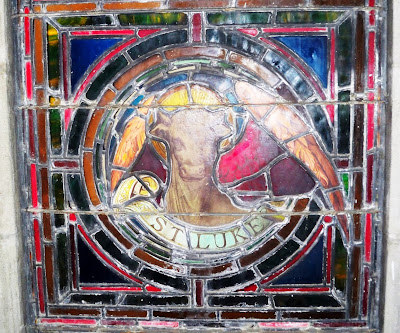 Saint Luke is also known as the “glorious physician,” and – especially in the Eastern Church – as an icon writer.

It is said that Saint Luke was born in Antioch in Syria (now in Turkey) to Greek-speaking parents. As a physician, he was said to have had a skill for healing, but left this behind around the year 50 AD and joined Saint Paul after they met in Antioch.

I wonder, as you gain experience – and, at times, heart-breaking experiences – of pastoral and hospital visits, do you wish you could call on the healing abilities and skills of Saint Luke the Physician?

Luke gives us the great poetry of the canticles Magnificat (Luke 1: 46-55), Benedictus (Luke 1: 68-79) and Nunc Dimittis (Luke 2: 29-32). Luke alone gives us the Annunciation, the Visitation, the birth of Saint John the Baptist, and the Presentation of the Christ Child in the Temple. Luke introduces us to Elizabeth and Zechariah, the angels and the shepherds at the first Christmas, Simeon and Anna, the Child lost in the Temple, the Good Samaritan, the unjust steward, the Prodigal Son, the healed Samaritan, Zacchaeus the tax-collector, and the Disciples on the Road to Emmaus.

Luke devotes significantly more attention to women. Alone among the four Evangelists, he portrays Christ as the constant friend of the poor, the down-trodden, the marginalised, the side-lined, healing the sick, comforting even the despairing thief on the cross beside him.

Or, as you are challenged by the ways of the world, do you wonder how – like Saint Luke the Gospel writer and Saint Luke the Iconographer – you can present the world with meaningful and accessible accounts and images of who Christ is?

Or, is Saint Luke the early missionary an inspiration for you, with his accounts of the missionary work of the early Church?

Without Saint Luke, it would be impossible to imagine how we could know about the earliest missionary endeavours of Saint Paul and the Apostolic Church.

And so I hope in your ministry and mission you find Saint Luke an attractive and interesting Biblical figure ... as an evangelist, as someone who presents Christ in ways that can be understood in the language of the people, whether word or image, as someone who gives healing a proper place in ministry, as a friend of the poor and the sick, the marginalised and the stereotyped, as someone who, in all his travels and travails, remains faithful unto death to the ministry he is called to and is charged with.

And so may all we think, say and do be to the glory of God, + Father, Son and Holy Spirit, Amen.

Canon Patrick Comerford is Lecturer in Anglicanism, Liturgy and Church History, the Church of Ireland Theological Institute. This reflection was shared at the Eucharist in the institute chapel on Saint Luke’s Day, 18 October 2013.