Reading The Masters, ‘the best
academic novel in English,’ in Cambridge

Over the past few weeks, I have completed a leisurely reading of The Masters, perhaps the best known of CP Snow's series of novels Strangers and Brothers.

I picked a well-thumbed, dog-eared copy of the book on a book barrow in Temple Bar one Sunday afternoon earlier this summer, and it has been stuck in my bag on trips to London, Hertfordshire, Essex, Sorrento and Cambridge.

Because it was bed-time reading, it took a little longer to read than most other books. But, although it was written in 1951 and set in 1937, the book came to life on the last of those visits, with its setting in Cambridge, while I was in Cambridge for this year’s summer school in Sidney Sussex College, organised by the Institute for Orthodox Christian Studies.

As the dons walk around the streets of Cambridge and the courts of their college, I could see those streets and courts come to life three-quarters of a century after the original storyline.

The plot involves the election of a new Master in 1957 at Lewis Eliot’s Cambridge college. Although the college is unnamed, it became obvious as I read on that the college in many ways resembles Christ’s College, where I have been a guest at the High Table in Hall, preached, lectured and stayed at different times over the past few years. The statutes of Christ’s College insist that every fellow undertakes to uphold it as a place of education, religion, learning, and research.

So, from his very beginning at Christ’s, Snow was aware of the tension and balance between the humanities and the sciences. 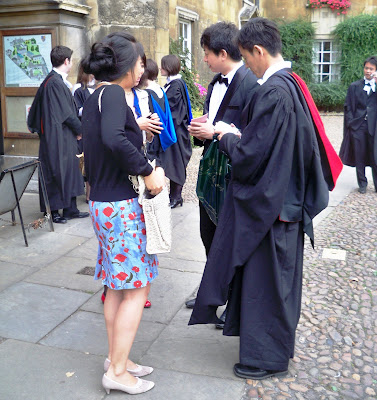 Snow dedicated The Masters to the memory of GH Hardy, the Cambridge mathematician. Hardy was a Fellow of Trinity College Cambridge, the two first met at a dinner in Christ’s in 1931, and the two shared a lifelong passion for cricket.
.
The story is set in 1937, against the backdrop of the Spanish Civil War and the irreversible drift towards World War II. The book begins with the Master of a Cambridge college, Vernon Royce, on his deathbed. His imminent death stirs intense rivalry and jealousy among the 12 fellows who have to elect his successor.

The Chapel of Christ’s College, Cambridge … in 2010, the college celebrated the 500th anniversary of the consecration of the chapel (Photograph: Patrick Comerford)

Paul Jago is an Irish-born graduate of Trinity College Dublin. His is an imaginative, magnanimous and sensitive person, but he has never distinguished himself as an English scholar. Lewis Eliot, the semi-biographical narrator, believes Jago would make a good master, but his wife is seen by some of the dons as a liability.

Thomas Crawford is politically radical and is prepared to make sure his college makes a stand against appeasing Hitler. However, Eliot believes Crawford is not going to be good at dealing with people. He is a confident, first-rate biologist, but he lacks many human qualities.

Crawford’s character is based on Sir Charles Galton Darwin (1887-1962), the grandson of Charles Darwin. Darwin was elected the Master of Christ’s College in 1936 – an election in which Snow switched his support from candidate to the other late in the day.

Jago’s character is based on Canon Charles Raven (1885-1964), Regius Professor Divinity at Cambridge 1932-1950. Raven was the unsuccessful candidate in 1936, but became Master of Christ’s in 1939 when Darwin left to become Director of the National Physics Laboratory, and remained Master until 1950, a year before Snow published The Masters.

In a letter to The Spectator in 1962, Raven denounced Snow for depicting academics as mere careerists. Is that how they are depicted in The Masters?

The Master’s Lodge and the Chapel in Christ’s College are side-by-side in First Court (Photograph: Patrick Comerford)

Much of the interest of the novel lies in its analysis of the motives and political manoeuvres of the fellows campaigning for their chosen candidates. Mixed motives are at work throughout the campaign. For some dons, personal politics is all that matters, for others it is down to personal charisma. Others ask whether they should choose a man of the arts or a man of science. Throughout it all, the conflict between loyalty and ambition is a constant theme.

The contest becomes more complex when a rich industrialist offers a large donation that would change the nature of college to the benefit of the scientists and for ever.

There is no final twist to the The Masters – the final result was almost predictable and inevitable. In the meantime, we have insights into the fellows’ attitudes to providing clergy for the parishes that are college “livings,” their living conditions, and their social and political values. It is a hardly a surprise that they get on better with the porters than they do with each other.

As he was writing, Snow could see the inevitable way in which Cambridge colleges would change. But, despite those changes, the Cambridge he evokes is still recognisable, and the appendix could be an account of the changes in any Cambridge college over the centuries.

The book still address many of the present conflicts between the humanities and the sciences: Can science determine human values? Or should science operate within moral and ethical humane parameters?

Snow knew these questions can never be answered conclusively in favour of one side or the other. In “The Two Cultures,” a lecture in 1959, he lamented the gulf between scientists and “literary intellectuals.” At one point in The Masters, the oldest college fellow, Maurice Gay, expresses this when he says: “We ought to have outgrown these arts and science controversies before we leave the school debating society.”

The Masters is considered “the best academic novel in English.” The story was broadcast by BBC Radio in August 1958, and the novel was first dramatised for the London theatre 50 years ago when Ronald Millar’s adaptation was staged at the Savoy Theatre in London in 1963.

The Masters is preceded in reading order by The Light and the Dark and followed by The New Men. Which should I read next.

Snow in Christ’s College ... First Court covered in snow when I was staying there in February 2009 (Photograph: Patrick Comerford)