Dusk in Lichfield on an
evening in late October 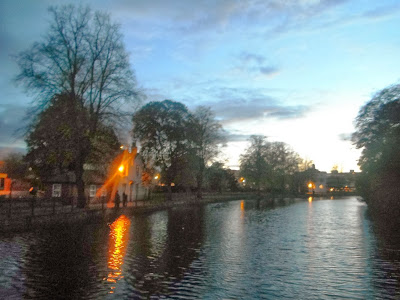 Fading lights on Minster Pool under the shadows of Lichfield Cathedral as evening turns to night (Photograph: Patrick Comerford, 2013)

After a working day in Oxford today [Wednesday 30 October 2013], visiting theological colleges and meeting colleagues who teach in similar areas, I had a little time to walk around Oxford before catching a train and heading north, preparing for tomorrow’s visit to Nottingham.

North of Oxford, as the train headed towards Banbury and on to Leamington Spa, Coventry and Birmingham, the lands and fields were covered in surface water after the storms that swept across England last weekend.

At Shenstone, south of Lichfield, horses were placid in the bright autumn afternoon, apart from one who pranced and danced in a field beside the train, as though he was born to race the pony express.

The readings for Evening Prayer provided an interesting contrast between the absurd amount of wine Holofernes had to drink as he planned to seduce Judith before he was slain by her (Judith 12), and the advice from the Apostle Paul to Saint Titus, the companion he left in Crete, about the amount of wine a bishop should drink (Titus 1).

In the fading lights of evening, I went for a walk in the countryside along Cross in Hand Lane, on the north west edges of Lichfield, strolled up and down Beacon Street two or three times, had a walk through the centre of Lichfield after the shops had downed shutters at the end of the day, stood for a while enthralled by the dim lights and shadows of late October on Minster Pool below Lichfield Cathedral, met a few old friends, and called into the George on Beacon Street, before returning in the late evening to the Hedgehog, where I am staying, on the corner of Stafford Road and Cross in Hand Lane for dinner, shared only with this morning’s edition of the Guardian.

Tomorrow is a long working day in Nottingham. But for many years I have felt at home and at ease in Lichfield, and I am looking forward to a quiet day on Friday, spending much of the day in Lichfield Cathedral, celebrating All Saints’ Day [1 November 2013], before catching the last flight from Birmingham International Airport to Dublin.

Before evening turns to dusk in fields on the edges of Lichfield (Photograph: Patrick Comerford, 2013)

‘Oxford is very pretty, but I don’t like to
be dead’: visiting the Oxford of TS Eliot 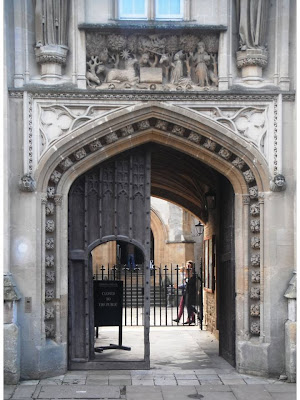 The Gatehouse at Merton College where TS Eliot studies briefly in 1914-1915 ... the gatehouse dates the early 15th century, when Henry V granted a royal 'license to crenellate, which allowed for the construction of the battlement tower above the present-day lodge (Photograph: Patrick Comerford, 2013)

In a letter to Conrad Aiken on New Year’s Eve 1914, TS Eliot wrote famously: “Oxford is very pretty, but I don’t like to be dead.”

In a similar vein, WH Auden said: “Oxford city is sheer hell. Compared with New York, it’s five times as crowded and the noise of the traffic is six times louder.”

I am in the Oxford of TS Eliot this week, but it is far from dead. Indeed, the Oxford that TS Eliot found pretty but deadening almost a century ago, and the WH Auden later found sheer hell, is very pretty but is also very much alive.

While he was still a graduate student at Harvard, Eliot received a Sheldon Travelling Fellowship to study at Merton College, Oxford, in 1914. He first visited Marburg, Germany, where he planned to follow a summer programme, but when World War I broke out, he went to Oxford instead.

So many American students were at Merton at that time the Junior Common Room proposed a motion “that this society abhors the Americanisation of Oxford.” It was defeated by two votes, after Eliot reminded the students how much they owed to American culture.

Merton College is one of the oldest and one of the wealthiest colleges in Oxford. It was founded in 1264 when Walter de Merton, Chancellor to Henry III and later to Edward I, first drew up statutes for the college and established endowments to support it, which were directly vested in the Warden and Fellows. Merton’s statues predate those of Balliol College and University College, neither of which had statutes until the 1280s.

The hall, the chapel and the rest of the front quad were complete before the end of the 13th century, has remained on the same site for almost 750 years. Visitors are often told that Mob Quad, built in the 14th century, is the oldest quadrangle of any Oxford or Cambridge college. Last year an estimate put Merton’s financial endowments at £175 million.

The college grace before formal dinners in Hall is:

In English, it prays:

The eyes of the world look up to you, O Lord. You give them food in due season.
You open your hand and you fill every creature with your blessing.
Bless us, O God, with all the gifts which, by you good works we are about to receive.
Through Jesus Christ, Our Lord, Amen.

It is similar to the graces in many Cambridge and Oxford colleges, and the first two verses are based on the Latin text of Psalm 145: 15-16.

The grace afterwards is brief:

‘Let him who has been blessed, give blessing.’ 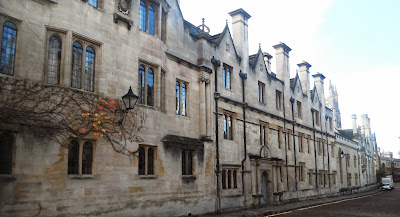 At this time of the year, Merton is also known for the traditional Time Ceremony, in which students in formal academic dress walk backwards around the Fellows’ Quad drinking port, linking arms and twirling around at each corner of the quad. The tradition is supposed to maintain the integrity of the space-time continuum during the transition from British Summer Time to Greenwich Mean Time on the last Sunday in October.

Two toasts are associated with the ceremony. The first is to “Good Old Times!” or “A Good Old Time!” The second is: “Long Live the Counter-Revolution!” The ceremony was invented by two undergraduates in 1971, partly as a spoof on other Oxford ceremonies, and partly to celebrate the end of the experimental period of British Standard Time from 1968 to 1971, when Britain stayed one hour ahead of GMT all year round.

Merton had other literary giants apart from TS Eliot. In November 1925, the Irish poet Louis MacNeice was awarded a “Postmastership” scholarship to Merton. During his first year Oxford, he first met W.H Auden, whose circle of friends included Stephen Spender and Cecil Day-Lewis.

From 1945 to 1959, JRR Tolkien was Merton Professor of English Language and Literature at Merton College, where, no doubt, he spent many hours in the Old Library while he was writing Lord of the Rings, which he completed in 1948. During that time, he also served as an external examiner for University College Dublin, and in 1954 he received an honorary degree from the National University of Ireland.

Eliot’s remarks about Oxford being very pretty were written in a letter to Conrad Aiken on New Year’s Eve 1914, when he said: “I hate university towns and university people, who are the same everywhere, with pregnant wives, sprawling children, many books and hideous pictures on the walls ... Oxford is very pretty, but I don’t like to be dead.”

Escaping Oxford, Eliot spent much of his time in London. There, the city had a many life-altering impacts on Eliot, the most significant of which was his introduction to the Ezra Pound.

They first met on 22 September 1914, when Eliot visited Pound’s flat. Pound instantly decided that Eliot was “worth watching” and introduced him to social events and literary gatherings.

While he was at Oxford, Eliot met his future wife, Vivienne Haigh-Wood, a Cambridge lecturer, and they were married in a secret ceremony on 26 June 1915.

During this time, it appears, Eliot was spending as little time as possible in Oxford and he left Merton after a year. By 1915 he was teaching English at Birkbeck College in the University of London. By 1916, he had completed his doctoral dissertation for Harvard, but he failed to return for the viva voce exam.

Despite escaping Merton and leaving Oxford life, Eliot returned to receive an honorary doctorate. He is still remembered with pride at his old college, where the award-winning TS Eliot Theatre opened in Rose Lane Gardens in June 2010. This is the most recent building in Merton College’s history of almost 750 years.

A bust of TS Eliot by Jacob Epstein was presented to the theatre by Frank Brenchley, a former fellow, who also presented Merton College with his collection of Eliot first editions and ephemera, said to be the second largest collection of its type worldwide.