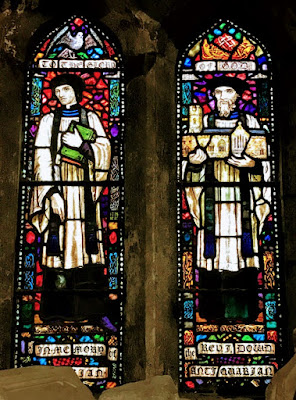 Shortly after posting my photographs and blog essay, two Facebook comments drew my attention to the windows by Catherine O’Brien (1881-1963) in Saint George’s and Saint Thomas’s Church, Dublin, and Saint Mary’s Cathedral, Limerick.

Of course, I had photographed Catherine O’Brien’s two pairs of windows in Limerick Cathedral earlier this month, when I visited the cathedral in the week prior to my installation as the Canon-Precentor.

These two pairs of windows are side-by-side on the north side of the north-east or Jebb Chapel in the cathedral.

The first pair of windows are two lancets, measuring 1340 mm x 350 mm. They are dated 1912, and although they were once ascribed to Michael Healy of An Túr Gloine Studio, art historians have long agreed that these windows are the work of the artist Catherine O'Brien (1881-1963).

The inscription above reads below the windows reads: ‘To the Glory of God,’ and below it reads: ‘In memory of the Revd J Dowd, historian and antiquarian.’

The Revd James Dowd (1848-1909) was born in Tubbercurry, Co Sligo, in 1848. A younger brother, John O’Dowd (1856-1937), became the Home Rule and Nationalist MP for North Sligo (1900) and South Sligo (1900-1918), and chair of Sligo County Council. He had the distinction of being the only MP who could boast of being elected in two different constituencies in the same year without opposition. He too had a background in journalism, writing for the Weekly News, the Shamrock, the Nation and the Sligo Champion.

James Dowd was educated at Trinity College Dublin, graduating BA in 1874, and completing his Divinity Testimonium. He was ordained deacon that year by Maurice FitzGerald Day (1816-1914), Bishop of Cashel and Waterford and former Dean of Limerick. Dowd became curate of Tipperary. He was ordained priest in 1876, and moved to the Diocese of Limerick, Ardfert and Aghadoe in 1877.

He spent his clerical life in Limerick as the diocesan curate, and also served the diocese as Diocesan Secretary, Diocesan Registrar and Diocesan Inspector of Schools. Although a mathematician by training, he became a well-known author and antiquarian, and for many years was the editor of the Limerick Chronicle.

Dowd was an eminent and published local historian, and secretary for Co Limerick for the Royal Society of Antiquaries of Ireland (RSAI). He was the author of Limerick and its Sieges and of histories of Saint Mary’s Cathedral, of Limerick City and of Co Limerick.

He died at home in Limerick after a long illness on 8 March 1909, and was buried in Kilkeedy Churchyard, Clarina, where his friend the Revd TWF Abbott, was the Rector of Kilkeedy. His daughter Kathleen later married the Revd RJ Colthurst, Rector of Kilkeedy (1914-1927).

His friend Abbott wrote of him: ‘He was the soul of good nature and always ready with a wise and witty remark.’

Harriet Dowd, who was 10 years younger than her husband, died at Midleton Rectory, Co Cork, on 24 March 1946. Their son, James Reginald Dowd, had a distinguished career in the British Foreign Service.

Catherine O’Brien’s lancet windows in the Jebb Chapel depict Dowd dressed as both a young priest and in older age. They are rich in colour and are enhanced by Celtic-themed decorations. The cathedral also has a brass lectern to his memory. 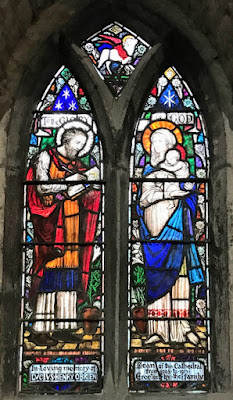 The Lancet Windows by Catherine O’Brien in the Jebb Chapel commemorating the the Very Revd Lucius Henry O’Brien, a former Dean of Limerick (Photograph: Patrick Comerford, 2017)

Lucius Henry O’Brien was born at Cahirmoyle, Co Limerick, on 13 August 1842. His father, the Young Ireland patriot, William Smith O’Brien (1803-1864), was MP for Limerick and inherited Cahirmoyle, Ardagh, Co Limerick, from his mother. Cahrimoyle is now within the Rathkeale and Kilnaughtin Group of Parishes, 9 km west of Rathkeale and 14 km south-west of Askeaton. His grandfather was Sir Edward O’Brien of Dromoland Castle, Co Clare.

Dean O’Brien’s aunt, Harriet Monsell (1811-1883), married Canon Charles Henry Monsell (1815-1851), who was Curate of Aghadoe, near Killarney, Co Kerry and Prebendary of Donaghamore in the Chapter of Saint Mary’s Cathedral, Limerick (1843-1851). When she was widowed, she founded the Community of Saint John Baptist, an Anglican order of Augustinian nuns dedicated to social service. She is remembered in the Calendar of Saints in some parts of the Anglican Communion on 26 March, and commemorated in the name of Harriet Monsell House in Ripon College Cuddesdon, near Oxford, where her community helped build the prize-winning college chapel.

Her nephew, Lucius Henry O’Brien was educated at Saint Columba’s College, Rathfarnham, and Trinity College Dublin (BA 1865, MA 1874), and was ordained in 1867. He was a curate in Mere, Wiltshire, and then a curate in Ramelton, Co Donegal, where his brother-in-law, the Very Revd John Gwynn, was the Rector.

He returned to his native Co Limerick in 1878 as Rector of Adare, and was appointed Dean of Limerick in 1905. At the time it was seen as an appropriate appointment, as the O’Briens were credited with founding Saint Mary’s Cathedral in the 12th century.

Dean O’Brien died on 25 September 1913. His obituary in the Limerick Chronicle said: ‘He was most sympathetic to the poor, and a generous friend to all local charities.’ The charities he was involved with directly included the Limerick Protestant Orphan Society and Barrington’s Hospital.

In the year he died, his brother-in-law, the Revd Robert Malcolm Gwynn (1877-1962), was one of the founding figures in the Irish Citizens’ Army. He helped to conduct the funeral in Saint Mary’s Cathedral, which included the hymn ‘Now the Labourer’s Task is O’er.’

The memorial windows by Catherine O’Brien in the Jebb Chapel are two lancets measuring 1360 mm x 330 mm, depicting Saint Luke (left) and the Virgin Mary with the Christ Child (right), and one tracery-light above depicting a winged ox, the traditional symbol for Saint Luke the Evangelist.

The Revd Robert Malcolm Gwynn died in 1962; Catherine O’Brien died in 1963; they are both buried in Whitechurch Churchyard in south Co Dublin. 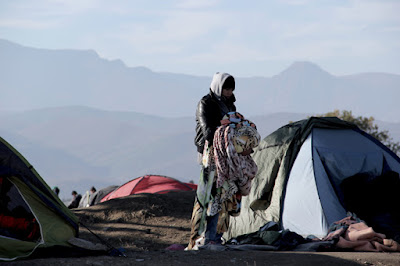 The migrants in northern Greece are fleeing war and persecution in their home countries (Photograph: USPG/Max McClellan)

In the articles and prayers in the prayer diary, USPG invites us to investigate what it means to be a disciple of Christ. The Lent study course ‘Living an Authentic Life’ (available online or to order at www.uspg.org.uk/lent), explores the idea that discipleship and authenticity are connected.

Give thanks that all people are created in God’s image: women and men, boys and girls, people of all genders. May we recognise God’s image in everyone.