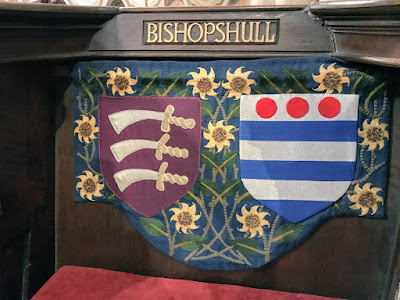 The stall of the Prebendary of Bishopshull in Lichfield Cathedral … two prebendaries became 17th century bishops in the Church of Ireland (Photograph: Patrick Comerford, 2017)

I was writing yesterday about Edward Wetenhall, who was born in Lichfield, became Bishop of Cork and Ross in 1678 and later Bishop of Kilmore. One of Wetenhall’s predecessors earlier in the 17th century, John Boyle, Bishop of Cork, Cloyne and Ross (1618-1620), had been a residentiary canon in Lichfield Cathedral before moving to Ireland, and indeed two former Prebendaries of Bishopshull in Lichfield became bishops in the Church of Ireland in the 17th century – John Boyle and Brutus Babington.

The Irish Church historian, Richard Mant, and others who followed him, claim that Boyle (15641620) had been Dean of Lichfield before he was became Bishop of Cork. However, from 1605 to 1622 William Tooker was Dean of Lichfield. Babington, for his part, aspired to become Dean of Lichfield, but his efforts were unsuccessful.

John Boyle was from of Faversham, Kent, the son of Roger Boyle and Joan Naylor. The elder brother of Richard Boyle, 1st Earl of Cork, he was baptised in Saint Paul’s, Canterbury, on 2 August 1564, and went to school in King’s School, Canterbury.

The Dictionary of National Biography says he received a doctorate in theology (DD) from Oxford but ignores his education in Cambridge. He was admitted to Corpus Christi College, Cambridge, in 1583, and graduated BA in 1586/1587. Later he would also receive the Cambridge degrees of MA (1590/1591), BD (1598) and DD (1614).

Despite the claims of later historians, he was never appointed Dean of Lichfield in 1610. Instead, as Thomas Harwood notes, he was appointed the Prebendary of Bishopshull in the Chapter of Lichfield Cathedral at the end of 1610.

On 5 February 1611, he applied for a canon’s house that would allow him to live in the Cathedral Close. His application was made on the basis of a royal grant, but was unsuccessful at first. Nevertheless, he was admitted to residence at the end of the year, on 31 December. However, Boyle never occupied his place in the cathedral from then until his appointment as Bishop of Cork.

Through the political and economic influence of his brother, Lord Cork and other family members, he was appointed Bishop of Cork, Cloyne and Ross in 1617, and was consecrated in 1618.

He died in Cork on 10 July 1620, and was buried at Saint Mary’s Collegiate Church in Youghal, Co Cork. There is a memorial to him in Preston Church, near Faversham.

His younger brother, Richard Boyle, 1st Earl of Cork, was admitted to Corpus Christi College, Cambridge, in 1583, and was later became a barrister at the Middle Temple. He went to Ireland in 1588, became MP for Lismore, a Privy Councillor and was given the titles of Lord Boyle (1616) and Earl of Cork and Viscount Dungarvan (1620). He was one of the Lords Justices of Ireland (1629) and Lord High Treasurer (1631). When he died in 1643, he too was buried in Youghal, Co Cork. 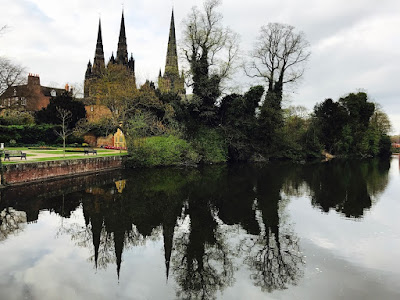 John Boyle’s predecessor as Prebendary of Bishopshull also became a bishop in the Church of Ireland.

Brutus (or Brute) Babington (1558-1611), who became Bishop of Derry, was a son of Richard Babington and Anne Starkey, formerly of Wrenbury Hall. He was the great-great-grandson of Sir Anthony Babington, MP for Nottingham and the second cousin once removed of the conspirator Anthony Babington, who executed for plotting to put Mary Queen of Scots on the throne.

On the death of George Boleyn, Babington applied to become Dean of Lichfield, but was unsuccessful. On 6 July 1603, he complained to Gilbert Talbot, 7th Earl of Shrewsbury, that the Chancellor of the Diocese of Lichfield, Zachary Babington, had obstructed his suit and dispossessed him of his divinity lectureship.

Zachary Babington was also the Master of Saint John’s Hospital, Lichfield, and his grand-daughter Margaret married John Birch, one of the trustees of the Comberford estates in the 1650s. He was the ancestor of the Babington family of Curborough Hall and Whittington Old Hall, near Lichfield.

In 1610, Brutus Babington was appointed Bishop of Derry, despite opposition from supporters of Dean William Webb.

Babington was chosen for Derry because he was seen as an advocate of a persuasive missionary approach to convert the native Irish population. His predecessor, George Montgomery had been zealously combative and had been moved to the Diocese of Meath.

Babington tried a new approach with his clergy. In his own words, he ‘did not violently go to work with them nor urge them by authority, but endeavoured rather to persuade their consciences by arguments and reasons.’ As Bishop of Derry, he approved an Irish language translation of the liturgy, and he tried also to compromise on the contended Oath of Supremacy by being content with an Oath of Allegiance.

Babington died unexpectedly on 10 September 1611. He had been a bishop for a mere year. He is commemorated in a window installed in the 1860s in the north aisle of Saint Columb’s Cathedral, Derry.

Bishopshull is a stall in Lichfield Cathedral, although the place itself is long forgotten. It was endowed by the Bishops of Lichfield with income from properties in or near the Cathedral Close that were owned by the bishops. The placename no longer exists but may have been derived from Bishop’s Hall or the land around the Bishop’s Palace on the north side of the cathedral.

The former Bishop’s Palace on the north side of the Cathedral Close in Lichfield, (Photograph: Patrick Comerford, 2017)