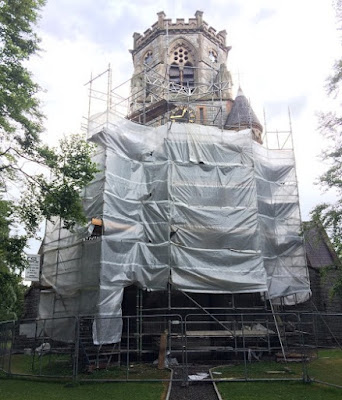 Much of Saint Bartholomew’s Church is covered in scaffolding and cladding as restoration and conservation work gets under way (Photograph: Patrick Comerford, 2015)

I am presiding and preaching at the Eucharist in Saint Bartholomew’s Church, Ballsbridge, this week and next. It is always a pleasure to return to this church, with its unique tradition in liturgy and music.

At the moment, much of the church building is covered in scaffolding and cladding as much-needed restoration and conservation work gets under way at Saint Bartholomew’s, which has an important part of the architectural heritage of the Church of Ireland.

The major focus of the renovation project this year is to make the envelope of the Church water and weather tight. The first part of the preliminary project on the stained glass windows has now been completed, and windows are being removed, carefully packed, crated and sent to Germany for restoration, while other windows are being cleaned and repaired in situ.

Meanwhile, work is being carried out on stonework in two sections of the apse, including two of the pinnacles. The area under scaffolding is to be extended around the chancel area so the stonemasons can continue their analysis, cleaning, repair and replacement. Sandstone is being imported from Britain and carved in Ireland to specified drawings.

Saint Bartholomew’s is preparing to celebrate its 150th anniversary: the Church was consecrated by Archbishop Richard Chenevix Trench (1807-1886) of Dublin on 23 December 1867. 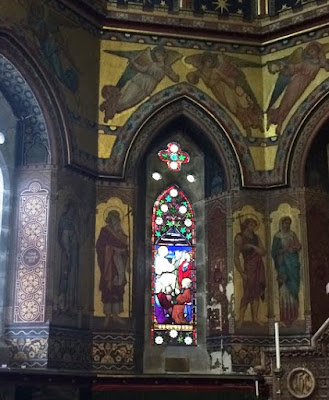 In 1863, five architectural practices were invited to submit portfolios to the committee selecting a design for the new church. Two submissions came from notable Irish practices: Lanyon, Lynn and Lanyon of Belfast and Sir Thomas Newenham Deane of Cork. The other three architects were based in England: William Slater, Robert Withers and Thomas Henry Wyatt (1807-1880).

The commission was awarded to Wyatt, perhaps because he enjoyed the patronage of the Herbert family who were the landlords of this part of Dublin, and who, as Earls of Pembroke, were to give their name to a new township based on Ballsbridge.

Wyatt was thoroughly versed in the principles of Gothic architecture and had a notable practice as the designer of more than 30 churches in England before he won the commission for Saint Bartholomew’s. In 1841, he designed a Romanesque church for the Herbert family at their Wiltshire estate at Wilton, outside Salisbury.

Wyatt also worked closely with Sidney Herbert, younger brother of the Earl of Pembroke, who administered the family estates. Herbert lived at Mount Merrion, and before he died in 1861 he donated the site for the “Pembroke District Church.”

Sidney Herbert was also a brother-in-law of the 3rd Viscount de Vesci, who had commissioned Wyatt to restore at Abbeyleix House, Co Laois and design the nearby church of Saint Michael and All Angels. Lord de Vesci laid the foundation stone of Saint Bartholomew’s in May 1865 and the church was completed and consecrated just before Christmas years later. 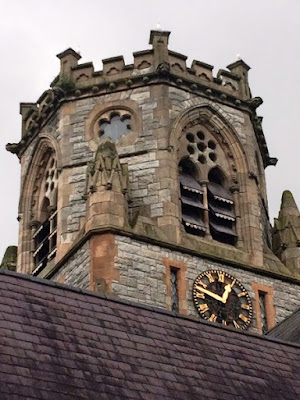 The spire he designed for the top of the octagonal belfry on Saint Bartholomew’s was never erected (Photograph: Patrick Comerford, 2015)

Wyatt designed a large Gothic Revival church, laid out on a traditional cruciform plan of nave, transepts and chancel. The font was a personal gift from Wyatt. However, the spire he designed for the top of the octagonal belfry has never been erected.

The church was built at a cost about of £7,000; part of this was provided by funds from the Ecclesiastical Commissioners, part by private subscription.

The builder was James Scanlan of Mountmellick, the carvings throughout the church are by CW Harrison, and the scheme for the painted decoration of the interior of the church was designed the architect Thomas Manley Deane (1851-1932).

Thomas Henry Wyatt was an architect with a prolific and distinguished career. Although he was born in Ireland, he is often regarded as an English architect. The Wyatt family included five or six generations of major English architects in the 17th, 18th and 19th centuries.

I was reminded once again of the Wyatt family’s family roots in and strong links with Lichfield and their interesting working relations with Pugin.

His grandfather was a first cousin of James Wyatt (1746-1813), who carried our alterations to Lichfield Cathedral at the end of the 18th century. Another member of the family, Sir Jeffry Wyatville (1766-1840), changed his surname to Wyatville (frequently misspelled Wyattville), and I am aware at first-hand of his alterations to Sidney Sussex College, Cambridge, in 1832.

This outstanding architectural dynasty was descended from John Wyatt (1675-1742) from Thickbroom in Weeford, outside Lichfield. But more of this extraordinary family of architects from Lichfield later in the week.