Westbourne House: a recovered part of
the architectural heritage of Terenure 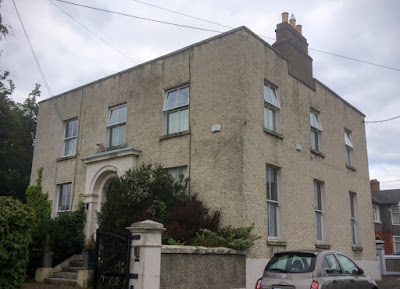 Westbourne House, off Rathfarnham Road … once the home of the architect Frederick Franklin (Photograph: Patrick Comerford, 2016)

The summer evenings in Dublin have allowed me to resume walking home, at least part of the distance, and to take photographs of some of the architecturally interesting in this part of south Dublin.

One of the houses I have known for years but paid little or no attention until this afternoon is Westbourne House, which is almost hidden at the entrance to Westbourne Road, off Rathfarnham Road.

I was born on Rathfarnham Road, and later lived for part of my childhood in a house on Rathfarnham Road, close to the corner of Westbourne Road, and although I knew of this house, I paid it little attention. Indeed, at one time it looked desolate and derelict, although it has been renovated and restored in the last 25 to 30 years.

On my way home this evening, I stopped to have a fresh look at Westbourne House, a large square-shaped house over a basement, off Rathfarnham Road. When the house was built in the early 1800s, it had views down to the banks of the River Dodder.

In 1837, when Terenure was known as Roundtown, Samuel Lewis named this house as Westbourne Lodge, and it was the home of T Dickson.

For almost 20 years at the turn of the 19th and 20th centuries, his house was the home of Frederick Franklin (1828-1905), an architect and surveyor of buildings at the Board of Works.

He died on 24 January 1905 and was buried in Mount Jerome Cemetery. His obituary in the Irish Builder described him as “a kindly, pleasant, courteous old gentleman … who up to the last almost took a keen interest in the doings of the profession from the active practice of which he had retired … a strong supporter of the Institute of Architects and a regular attendant at its meetings.”

By 1911, Westbourne was the home of Walter Hume. It was still facing the main road, and this stretch of Rathfarnham Road was still known as Terenure Road South.

But in the century since, the surroundings of Westbourne House have changed radically. The house now faces directly onto Westbourne Road, a relatively new street off Rathfarnham Road. More recent houses have been built across the street, blocking its original view of the River Dodder.

About 25-30 years ago, the house was restored and rebuilt, and was divided into two apartments.
For other postings on the architectural heritage of South Dublin see:

Posted by Patrick Comerford at 19:18 No comments:

Speaking about 1916 at
the Rubicon Conference

Three months ago [16 April 2016], I was one of the speakers at the Rubicon Conference in the Church of Ireland College of Education in Rathmines.

The keynote speaker was Brian Zahnd from Minnesota, a pastor and the author of Water to Wine, A Farewell to Mars and Beauty Will Save The World.

This year, Rubicon explored 100 years of Irish culture, arts and faith. Because this year is the one-hundredth anniversary of the 1916 Rising, I was invited to speak on ‘http://www.patrickcomerford.com/2016/04/rubicon-2016-19162016-before-between.html.’

Three months later, the delivered version of my conference paper has now gone on-line on the Rubicon ‘You Tube’ Channel.

The conference brought together leaders from the media, education, politics, the arts, business, social sector and the Churches to learn from one another and to talk about the big questions around faith and culture.

Rubicon is a yearly event which sets out to explore how people of faith can continue to engage in all spheres of influence. The format allows participants to chat in a “TED”-esque format with interaction and table discussions.

The event was co-founded by Greg Fromholz and the Rev Rob Jones as an initiative of Holy Trinity Church, Rathmines. The other speakers included Stephen James Smith, slam poet, writer and performer; Sister Denise Boyle, who spoke about child prostitution and trafficking; and Shane O’Doherty, author of The Volunteer: A Former IRA Man’s True Story; and Sister Imelda Wickham, Wheatfield prison chaplain.