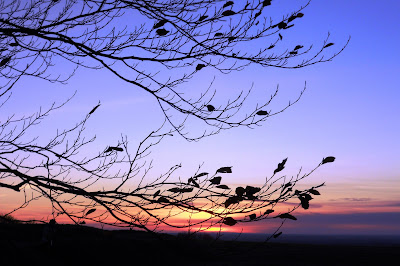 November sunset seen from the top of the Hill of Tara (Photograph: Patrick Comerford, 2011)

On my way back to Dublin from Cavan on Sunday evening, I stopped at Kells to view the ancient monastic site with its high crosses and round tower. The evening lights were beginning to dim, but the sky was still clear and blue, and it seemed that there was still time to visit the Hill of Tara, about 30 km south and 30 minutes away on the M3.

Although I went to school in Co Meath, I cannot remember ever visiting Royal Tara, which was once the spiritual and political capital of Ireland and which had a central place in Irish history. Surely, had I ever visited Tara I would have remembered such a splendid place.

Turning off the M3, the Hill of Tara was less than 2 km off the Navan to Dublin road. The sun was beginning to set and the visitor centre was closed, but the climb was worthwhile, and the rewards could not have been expected.

It is said that the five ancient roads of Ireland converged here. The M3 motorway below makes this difficult to appreciate today, but the hill commands spectacular views in every direction across miles and miles of open countryside.

Some traditions say Tara was the seat of the High Kings of Ireland, others suggest it was a sacred site for royal rituals, while others are sceptical of the many stories and myths that have accumulated around the hill.

Certainly, the Hill of Tara had a significant role long before Celtic times, when the high kings were inaugurated here, although the high kingship of the whole of Ireland was only established by Malachy I (846-862 AD). But it is easy to see why Tara was chosen by ancient royalty as the site for their palace. 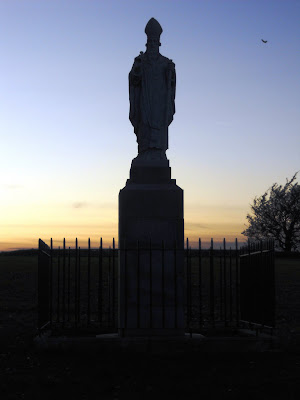 A statue of Saint Patrick in relief against the setting sun on the Hill of Tara (Photograph: Patrick Comerford, 2011)

At one time, it was a capital offence to make a fire within sight of Tara. According to tradition, Saint Patrick defied this stricture when he lit a Paschal fire further north on the Hill of Slane, where he was encamped on his way to Tara in the year 433 AD.

Saint Patrick was hoping to reach Tara on Easter Day to preach the Gospel of the Resurrection and Eternal Life. Those who saw his fire from Tara that Easter Eve told King Laoghaire of their fears that if Saint Patrick’s fire was not extinguished immediately it would burn brightly for ever more, consuming their pagan fires and eventually overthrowing the stronghold of Tara itself. When King Laoghaire saw the fire and listened to the fears of his advisers, he drove in his chariot immediately to Slane.

There, he had a dramatic encounter with Saint Patrick, but failed to quench his fire. On the following day, Saint Patrick and his followers made their way to Tara, and on the way, it is said, he composed The Breastplate of Saint Patrick. 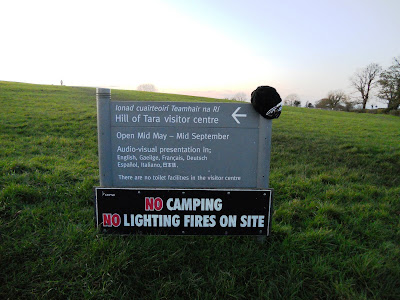 And so, as I began my climb up the Hill of Tara, it was amusing that the first sign I noticed was one warning visitors not to set up camps or to light fires. 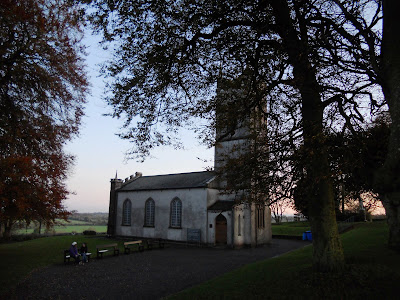 The Visitor Centre is located in Saint Patrick’s, the former Church of Ireland parish church on the hill. Although this was closed on Sunday, the church is still the location of an open air service on the Hill of Tara organised by the Navan Union of parishes on the last Sunday in June each year. 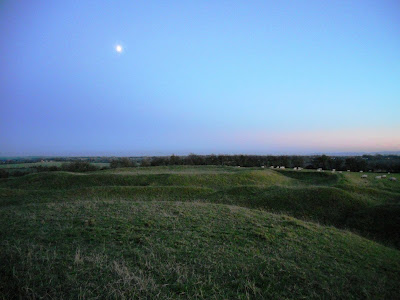 The moon rising above the summit of the Hill of Tara (Photograph: Patrick Comerford, 2011)

I made my way on through Saint Patrick’s Churchyard, and at the summit of the hill, to the north of the ridge, I found myself at the oval Iron Age hilltop enclosure known as the Fort of the Kings or the Royal Enclosure. This measures 318 metres north-south by 264 metres east-west, and is enclosed by an internal ditch and external bank. The most prominent earthworks within this enclosure are two further linked enclosures known as Cormac’s House and the Royal Seat. 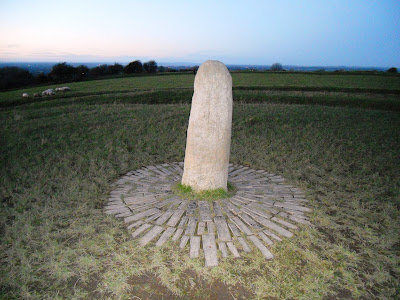 The Lia Fáil at the summit of the Hill of Tara ... but is this the Stone of Destinty? (Photograph: Patrick Comerford, 2011)

In the middle of the Royal Seat is the Lia Fáil or Stone of Destiny, at which, it is said, the High Kings of Ireland were crowned. The Lia Fáil, once located just north of the Mound of the Hostages, was moved to its current site after the Battle of Tara in 1798 to mark the graves of 400 rebels who died here.

Some legends claim the true Stone of Destiny was the Pillow of Jacob (Genesis 28: 10-22), brought to Ireland by the Prophet Jeremiah. They say it was later moved from Tara by King Fergus of Scotland to Scone Abbey near Perth, where it become the Stone of Scone, later used as the coronation stone in Westminster Abbey. This stone is now in Edinburgh Castle.

Is the present granite pillar on the Hill of Tara the true Stone of Destiny? Or is the Stone of Scone the real thing? Does it matter if you regard all this as mere legend?

The power of legend persisted for centuries: over a five-year period between 1897 and 1902, the Hill of Tara was excavated by a group British Israelites, who believed the people of Ireland and Britain were descended from the Lost Tribes of Israel and that the and the Stone of Destiny and the Ark of the Covenant were buried on the hill. In the process, they sorely damaged much of this amazing, ancient place.

The Mound of the Hostages ... a Neolithic passage tomb on the Hill of Tara (Photograph: Patrick Comerford, 2011)

To the north too, just outside the Fort of the Kings, is a ringfort with three banks known as the Rath of the Synods. Further north are the “Banqueting Hall,” the Sloping Trenches and Gráinne’s Fort. To the south is Laoghaire’s Fort, where King Laoghaire is said to have been buried standing up.

As the sun set, I could still see for miles across the countryside – it is easy to understand how some people claim that from the top of Tara it is possible to catch a glimpse of 25% of the island of Ireland.

There are no clear paths up and down the hill, and on my way down, as darkness descended and enveloped the hill, I found myself scrambling through ditches or sliding on slippery grass. But as night fell I knew it had been a truly rewarding day.
Posted by Patrick Comerford at 06:30 No comments: