Low Sunday and high office in the Church 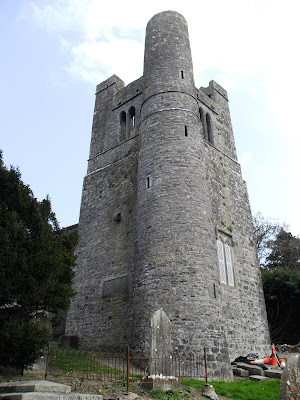 Today is often known in the Church as Low Sunday – perhaps because the liturgical observances of the Second Sunday of Easter have a much lower pitch than those on Easter Day.

The choir of Christ Church Cathedral is on holidays, and I was presiding at the Eucharist this morning, as well as leading Evensong this afternoon.

Later, two of us joined friends in Balrothery, near Balbriggan, for a birthday party. As we arrived, and as I looked up at the former Church of Ireland parish church, perched on the fortified mound at Balrothery, I was reminded not only of the former importance and prestige of this parish, but of two 17th century rectors who used the wealth and status of the parish to enhance their own power and income – Bishop Thomas Ram and Archbishop Thomas Jones.

Both were Cambridge graduates who came to Ireland at the turn of the 16th and 17th centuries, and wielded immense power in both church and state in Elizabethan, Jacobean and early Caroline Ireland, and they also shaped the history of Christ Church Cathedral, Dublin.

While still a Fellow of King’s College, Cambridge, when he came to Ireland in 1599 with the Lord Deputy, the Earl of Essex, as his chaplain, and a year later he was appointed Dean of Cork. Lord Mountjoy, who succeeded Essex as Lord Deputy, retained Ram as his chaplain. In 1600, Ram became a Vicar-Choral and Prebendary of Saint John’s in the chapter of Christ Church Cathedral, Dublin, in 1601 he became Precentor of Christ Church, and in 1601 he became Dean of Cork.

To add to all these lucrative benefices, Ram was presented by the Crown as Vicar of Balrothery in 1604.

He resigned as Dean of Cork the following year when he appointed Bishop of Ferns in 1605. On 2 May 1605, he was consecrated Bishop of Ferns and Leighlin in Christ Church, Dublin. However, he was allowed to hold his other Church preferments, including being Precentor of Christ Church Cathedral and Vicar of Balrothery, in commendam.

His excuse was that his new diocese, although recently united, was suffering extreme poverty due to the fraudulent or improvident alienations made by former bishops, and of lay encroachments. He found his expected income from the Diocese of Ferns was reduced from about £500 a year to one-seventh of that value; but he recovered £40 a year in land after a long lawsuit.

The Diocese of Leighlin was worth only £24, all the lands having been alienated, and there being no prospect of recovering them by law.

In Ferns, Ram was a careful bishop, constantly resident, holding an annual visitation, and taking care to leave no parish without financial provision. He did what he could to maintain schools, but the Roman Catholic clergy excommunicated all who used them.

Ram was one of twelve bishops of the Church of Ireland who, on 26 November 1626, signed a protest “against tolerating popery.”

He built a see house at Old Leighlin, and bequeathed a library for the use of the clergy, but this was destroyed in the rebellion of 1641. He died in Dublin on 24 November 1634, and was buried in his own private chapel in Gorey, Co Wexford.

The bishop had acquired at Gorey, and built Ramsfort in 1630. An. inscription on Ramsfort reads: “This house Ram built for his brothers, so sheep would bear wool, not for themselves, but for others.” The Ram family coat of arms was carved onto this mansion and had this inscription:

Let all thy thoughts, thy words, thy deeds, be such onto thy brother
As thou would this should be and let them be none other.

Bishop Ram also built the Episcopal Palace in Ferns and the bishop’s residence at Gorey, and obtained a charter for Gorey under the name of Newborough. The charter made provision for an MP for the borough parliamentary representation and for a corporation, made up of a sovereign (mayor), burgesses, and free commons.

Ram remained Precentor of Christ Church Cathedral, Dublin, for the rest of his days, although he probably resigned as Vicar of Balrothery around 1605 or 1606, and was succeeded there by Revd Canon Thomas Meredith. 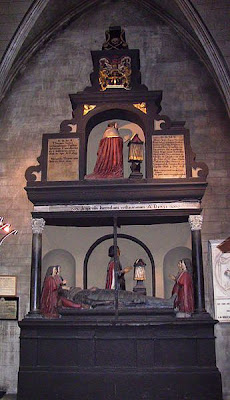 Meredith was succeeded in Balrothery in 1608 by the Most Revd Thomas Jones, who by then was also Archbishop of Dublin, Rector of Trim in the Diocese of Meath, Lord Chancellor of Ireland, and Prebendary of Castleknock in Saint Patrick’s Cathedral, Dublin.

Thomas Jones (ca 1550-1619) was born in Lancashire and was educated at Christ’s College, Cambridge, receiving the degrees BA and MA.

He soon moved to Ireland, and his first church appointments were as Chancellor of Saint Patrick’s Cathedral and Rector of Saint Werburgh’s in 1578, and then as Prebenadary of Tassagard in 1581. By then, Jones had married a widow, Margaret Purdon, who was also a sister-in-law of Archbishop Adam Loftus. His new relationship to Loftus proved beneficial his career, and in 1582 Jones was appointed Dean of Saint Patrick’s.

As dean, Jones granted questionable leases of church property, including a 161-year lease that caused a later dean, Jonathan Swift, to reprimand Jones.

Despite these transactions, when Archbishop Thomas Lancaster of Armagh died in 1584, Loftus recommended Jones as his successor. Instead, Jones was appointed Bishop of Meath on the nomination of Queen Elizabeth.

When Loftus died in April 1605, King James I appointed Jones as Archbishop of Dublin. At the same time, Jones was named Prebendary of Castleknock in the Chapter of Saint Patrick’s Cathedral Dublin, and Rector of Trim in the Diocese of Meath, and he enhanced his income and strengthened his power by making himself Vicar of Balrothery in 1608.

In 1604, Jones was also appointed Lord Chancellor of Ireland, a position he held for the rest of his life, and in 1613 he became a Lord Justice in 1613. In 1613, he also received the degree DD from Trinity College Dublin.

But long before his death, Jones had resigned as Vicar of Balrothery in 1610, and was succeeded in 1610 by the Revd Ralph Kidman. Archbishop Jones’s monument in Saint Patrick’s was restored in 1731 at the request of Jonathan Swift.

Later rectors were less likely to use Balrothery to enhance their income or extend their control of their church, although the Rectors of Balrothery became entangled with the clergy of Balbriggan in the 19th century over burial rights in grounds of Saint George’s. Some had curious if not exotic backgrounds: the Revd Henry Brodie Good, who was Rector from 1909 to 1927, was born in Ceylon (present-day Sri Lanka).

Balrothery was united with Balbriggan parish in 1929, and both were grouped with Holmpatrick and Kenure in 1960. Balrothery Church finally closed in 1965.
Posted by Patrick Comerford at 22:25 No comments:

Appreciate water before it is privatised 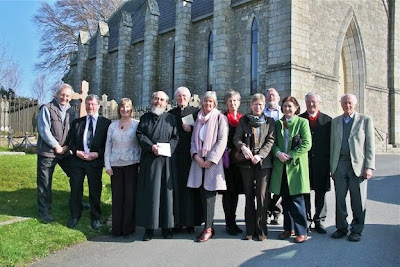 The above photographed is published in black and white on p. 11 and in colour on p. 66 of the current [May 2011] edition of the Church Review (Diocese of Dublin and Glendalough, along with the following half-page report by Orla Ryan on p. 11:

Appreciate water before it is privatised

While preaching at a 3Rock Churches Environmental Group Ecumenical Service in Whitechurch Parish Church on ‘Water Awareness Sunday’, Canon Patrick Comerford, Director of Spiritual Formation at the Church of Ireland Theological Institute, extolled the many virtues of this natural resource and encouraged us to cease from taking it for granted before it is privatised.

He described last winter’s water crisis as a wake up call, saying it “was not caused by us using too much water; but by us wasting too water; mainly though not maintaining the pipes that bring water from our lakes and rivers to our homes, factories, offices and schools”. He continued, “If this problem is not addressed, and water charges are introduced, then we can be sure, that like all taxation, those charges will rise steadily, drip-drip-drip, that people will be cut off, that major health problems will arise, and that eventually – as so often happens – there will be pressures to privatise the water supplies. When that happens, profit, not health and cleanliness, will quickly become the primary motive for supplying water.”

Rather than complacency, Patrick feels we ought to be in wonder and in awe of water. He drew attention to the fact that “up to 60% of the human body is water; the brain is composed of 70% water; and the lungs are nearly 90% water. About 83% of our blood is water, which helps digest our food, transport waste, and control our body temperature”.

He went on to describe water as “the first and the last of God’s great blessings in nature, immediately after creation itself”. He noted how Saint John, surrounded by the Aegean waters in lonely exile on Patmos, drew constantly on water for his images of God, of God’s action in the world, of Christ’s bounty and generosity, and of the Kingdom of God, saying, “It is as if he is drawing from a deep well for his inspiration.”

He encouraged all people to appreciate the gift of water, before it’s too late.
Posted by Patrick Comerford at 09:00 1 comment: