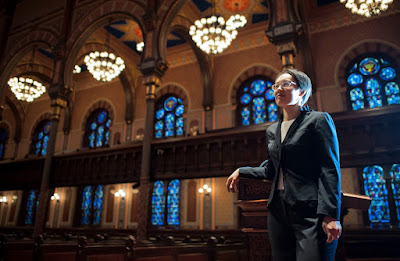 The death of the former Chief Rabbi, Lord (Jonathan) Sacks last year deprived not only Judaism but the English-speaking world of one of its great intellectual minds in the fields of theology, religion and social justice.

On the other side of the Atlantic, Rabbi Angela Warnick Buchdahl is increasingly being heard as a Jewish voice of intellect and compassion. She speaks out for diversity and social justice and against racism, and she deserves to be better-known and heard more widely throughout the English-speaking world.

I first came across Rabbi Angela when I watched a video of her as a cantor singind a moving rendition of Kol Nidre, a moving text and melody that gives its name to the evening service on Yom Kippur.

Rabbi Angela Warnick Buchdahl was born Angela Lee Warnick on 8 July 1972 in Seoul, South Korea, to a Jewish father and a Buddhist mother. Her mother , Sulja Yi Warnick, was a Korean Buddhist born in Hyogo in Japan at the height of World War II; her father, Frederick David Warnick, was a US-born Ashkenazi Reform Jew, whose ancestors moved to Canada and the US from Moinești in Bacău, Romania and Zvenyhorodka or Zvenigorodka in central Ukraine.

The Jewish community of Zvenyhorodka, known as Zvenigorodka in Yiddish and Russian, existed for 200 years until it was decimated by the Nazis and finally destroyed by the Soviet Union. Her Jewish Romanian great-grandparents, Saul Hirsh Soss (1871-1946) and Clara Silverstein (1882-1976), came by ship to New York in 1899 and lived a few blocks from the current location of Central Synagogue, where she is now rabbi.

Finding Your Roots, a PBS series similar to Who Do You Think You Are?, showed that her 20th great-grandfather on her mother’s side was King Taejo of Joseon.

At the age of five, Angela Warnick moved to the US with her family. She was raised Jewish, and attended Temple Beth El in Tacoma, Washington, which her great-grandparents had helped to found a century earlier. She and her mother were involved in synagogue activities, and in her teens she became a leader in school and within the youth group.

But from a young age she experienced demeaning comments from fellow Jews, doubting her Judaism. But she decided she would not let those people dictate her relationship with Judaism.

At the age of 16, she visited Israel through Bronfman youth fellowships with other Jewish teenagers from the US. There, the authenticity of her Judaism was questioned for the first time, by others who held that only the children of a Jewish mother can be Jewish. Her Orthodox roommate told her she did not consider her Jewish, and Israelis asked whether she knew the meaning of the Star of David on her necklace.

This was a painful experience fir her in Israel, and she felt marginalised and invisible. As a college student, she spent her summers working as head song leader at Camp Swig, a Reform Jewish camp in Saratoga, California. At 21 she underwent a formal conversion or giyur, which she sees as a ‘reaffirmation ceremony.’

She was a student at Yale University, and she was one of the first female members of Skull and Bones, an elite secret society whose members have included former President George W Bush and former Secretary of State John Kerry.

She graduated from Yale in 1994 with a BA in Religious Studies. There she met her husband Jacob Buchdahl, a lawyer, and she then began her cantorial and rabbinic studies at Hebrew Union College.

She was invested as a cantor in 1999 and was ordained as a rabbi in 2001 by the Hebrew Union College-Jewish Institute of Religion (HUC-JIR) in New York, a Reform seminary in New York. She then became assistant rabbi and cantor at Westchester Reform Temple, a large synagogue in Scarsdale, New York, with over 1,200 families.

She moved to Central Synagogue, a large Reform congregation in Manhattan, as the senior cantor in 2006. In time, Friday night attendance at the synagogue doubled, post-bar mitzvah retention tripled and the waiting list for membership rose to over 300.

On 1 July 2014, Rabbi Angela Buchdahl succeeded Peter Rubinstein as the Senior Rabbi at Central Synagogue. She is the first woman and first Asian-American to hold the post in the long history of Central Synagogue, and one of only a few women serving as leaders of a major US synagogue.

Later that year, she was welcomed by President Barack Obama to lead the prayers in the White House at the Hanukkah celebration in December 2014.

She remarked on how special the scene was, and asked the President if he believed America’s founding fathers could possibly have pictured that a female Asian-American rabbi would one day be at the White House leading Jewish prayers in front of the African-American president. Her speech on the meaning of Hannukah and religious freedom was met with applause and cheers.

On 22 March 2019, she opened the doors of Central Synagogue to hundreds of worshipers from the the nearby Islamic Society of Mid-Manhattan when their mosque was destroyed in fire, a gesture that became national news throughout the US.

The Jewish Telegraphic Agency named her in December 2019 among the Jews who had defined the previous decade: ‘The choice of Buchdahl to replace the retiring Rabbi Peter Rubinstein elevated a woman and a Jew of colour to a position of virtually unprecedented prominence in the Jewish world and made Buchdahl a potent symbol of the changing face of American Judaism.’ Haaretz has described her as ‘the face of Judaism for many Americans, while not being kosher enough for Israel.’

Central Synagogue, one of New York’s most prestigious Reform synagogues, has over 7,000 members and 100 full-time employees, and is a flagship synagogue of the Reform movement, with over 6,500 members. The Wall Street Journal recently described Central as New York City’s first ‘megashul,’ with its robust weekly worship attendance and overflow High Holiday crowds. Hundreds of thousands of people from about 100 countries watch its services during the High Holy Days.

Rabbi Buchdahl, who lives in New York with her husband and their three children, has shifted people’s perceptions of what it means to look Jewish. But it is her intellect, charisma, and deep spiritual curiosity that mark her ministry as a rabbi.

‘Judaism has a message for the world that should be attractive to anyone, and we should be less closed, or tribal, in feeling like it is only ours,’ she said in an interview with Haaretz two years ago (19 January 2019).

She says ‘prayer is powerful for people when it speaks in a genre or in the language they understand. The Reform movement for a long time rejected Hebrew, but in my synagogue, at least half of the service is in Hebrew, and of the prayer, I think 75 percent is Hebrew. We very rarely do readings in English, but I’m not only talking about language … Part of what we’re doing is reminding people of the many communities we are a part of.’

Here is a link to a sermon in which she challenges racism within American Judaism:

This is Rabbi Angela as a cantor singing Kol Nidre at Central Synagogue: 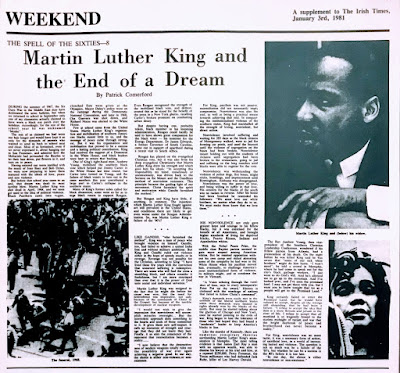