Only one pay cheque away from poverty 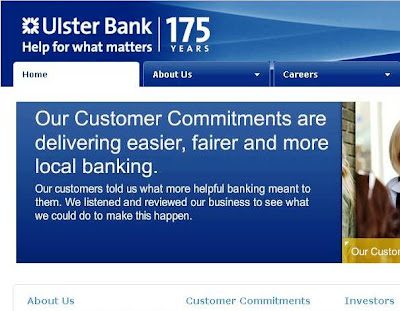 Who wrote this anyway? And how is charged with implementing it?

It is often said that many people are only one pay cheque away from poverty. In Ireland, that could be a week’s wages, a week’s pension or a week’s social welfare payments.

Since last Wednesday, Ulster Bank has left many people without access to their meagre payments for almost a week.

Many of these people are on the margins, dependent on social welfare payments or pensions. But many more are hard working people, whose wages and salaries have gone out of their employers’ accounts but not into the workers’ accounts.

Ulster Bank says none of its customers is going to suffer financial loss or be penalised. But that’s not going to take away anxiety or relieve ulcers.

Ulcer Bank is too kind a name for a bank where in recent months overpaid directors have nodded in acquiescence as their bank moves immediately against people who default on a single mortgage payment. Ulcer Bank? No thanks.

A BBC News report on Friday claimed: “The technical problem that has hit NatWest and Ulster Bank customers has been resolved, according to a bank source. However, the banks have big backlogs to clear and things will not be back to normal until Monday. The problem has seen payments disrupted into and out of accounts and that is expected to continue through today for some customers.”

Now it appears this was simply PR feed to the BBC, and things will not be back to normal even tomorrow.

There is an old legal maxim, attributed originally to William Ewart Gladstone, that says: “Justice delayed is justice denied.”

There ought to be a banking maxim that says: “Payment delayed is payment denied.”

The banks are very nifty when it comes to making unilateral decisions about rates and charges. Now it’s time for the customers to turn the tables, and unilaterally charge Ulster Bank, NatWest and RBS for holding onto our money. And that should be a penalising charge, way above the overnight lending rate banks charge each other.

And if they don’t pay those rates and charges that have been imposed on them, perhaps their customers should consider class action and within seven days call in the receiver.

If Ulcer Bank can’t turn around payments immediately, then they are not providing the services they charge customers for.

If I behaved like this in a corner shop or small café, I would be accused of trading recklessly and trading under false pretences since last Wednesday ... and the bank would move in close me down and take possession of my presmises.

Ulster Bank opened some of its branches this morning. But this was no act of charity.

Ulster Bank has over 1.9 million customers, and a few short hours on a Sunday morning is no help to them at all. This is a problem that requires day and night attention right up to the very top of Ulster Bank.

What about the claim on the website that “we are working around the clock to resolve the problem fully”? Well, Ulster Bank has 236 branches, but despite the publicity the bank created for itself, it only opened the doors of twelve branches in the Republic for this morning – and then for only five hours until lunchtime. Surely that is not pouring in all the resources needed for a crisis that is hitting the pockets of ordinary people and causing heartbreak for many families.

I pity the frontline workers at the few bank branches that opened who were called in on a well-earned weekend off to listen to frustration and anger of customers without having the power to offer any remedies, while the directors were out on the golf course or in the yacht club instead of rolling up their sleeves and getting to work on this problem.

The home page of the Ulster Bank website says: “Our Customer Commitments are delivering easier, fairer and more local banking. Our customers told us what more helpful banking meant to them. We listened and reviewed our business to see what we could do to make this happen.”

And then they did this. It’s enough to make you laugh if you’re not already crying ... or seething with rage.

It would be more appropriate for people who write this sort of clichéd jargon to read and repeat Clause 40 of the Magna Carta, which declares: “To no one will we sell, to no one will we refuse or delay, right or justice.”

And when this crisis is over, it will be interesting to know how much Ulster Bank gives to charities dealing with poverty in Ireland, mopping up when the banks and the bankers walk away. 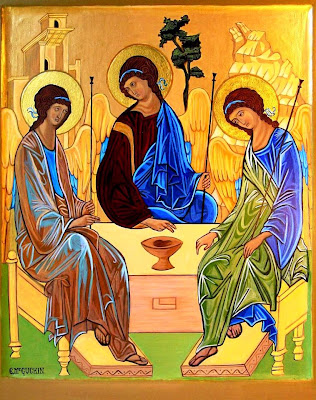 An icon of the Holy Trinity by Trinity, Eileen McGuckin

Today is the Third Sunday after the Trinity and may also be marked as the Feastday of the Birth of Saint John the Baptist [Sunday 24 June 2012].

An appropriate prayer for these weeks in Ordinary Time immediately after Trinity Sunday comes from Saint John of Kronstadt: “As the Holy Trinity, our God is One Being, although Three Persons, so, likewise, we ourselves must be one. As our God is indivisible, we also must be indivisible, as though we were one man, one mind, one will, one heart, one goodness, without the smallest admixture of malice – in a word, one pure love, as God is Love. ‘That they may be one, even as We are One’ (John 17: 22).”

Tomás Luis de Victoria (1548-1611) was the most famous composer in 16th century Spain, and he stands alongside Giovanni da Palestrina and Orlando di Lasso as one of the most important composers of the Counter-Reformation. He may have been taught by Palestrina and is sometimes called the “Spanish Palestrina.”

Victoria was born in Ávila in Spain, the seventh of nine children and was a choirboy in Ávila Cathedral, where he began studying the keyboard at an early age.

He went to Rome around 1565, and there he became cantor at the Collegium Germanicum, founded by Saint Ignatius Loyola. After Palestrina left the Roman Seminary, Victoria took over as maestro, and he was ordained priest in 1574. A year later, he became Maestro di Capella at S. Apollinare.

He returned to Spain in 1587 at the invitation of King Philip II, who made him chaplain to his sister, the Dowager Empress María. He was her chaplain for 17 years until she died in 1603, and his most famous work, and his masterpiece, was a Requiem Mass for the Empress Maria. After her death, he worked as a convent organist. However, he was in Rome in 1593, and again in 1594 for Palestrina’s funeral in 1594. He died in 1611 and was buried at the convent.

Victoria is the one of the greatest composers of sacred music in the late Renaissance, and his music expresses the passion of Spanish mysticism and religion. Many commentators hear in his music a mystical intensity and direct emotional appeal. He was a master at overlapping and dividing choirs with multiple parts with a gradual decreasing of rhythmic distance throughout. He incorporates intricate parts for the voices, and in many of his choral pieces he treats the organ almost as a soloist.

This morning’s hymns are:

The Preces and Responses are by Philip Radcliffe (1905-1986), and the canticles Magnificat and Nunc Dimittis are from the Evening Service in G by Herbert Howells (1892-1983).

The anthem is SS Wesley’s ‘Ascribe unto the Lord,’ based on Psalms 96 and 115, and there is a closing hymn in Irish, Hymn: Ag Críost an síol by Michael Sheehan and Seán Ó Ríada.

O God,
whose beauty is beyond our imagining
and whose power we cannot comprehend:
Give us a glimpse of your glory on earth
but shield us from knowing more than we can bear
until we may look upon you without fear;
through Jesus Christ our Saviour.