Spending a morning deep underground
in the Salt Mines of Wieliczka 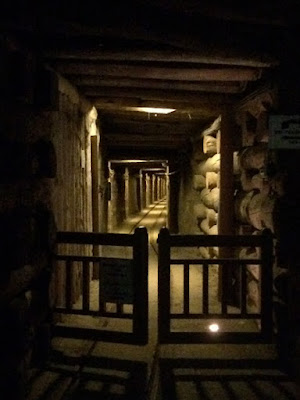 Inside the Salt Mines at Wieliczka, one of Poland’s most popular tourist attractions (Photograph: Patrick Comerford, 2016)

I spent this morning in the Salt Mines at Wieliczka, 12 km south-east of Kraków. These mines have produced table and commercial salt since the 12th century, and although commercial mining stopped in 1996 because of low salt prices and flooding in the mines, this remains one of the oldest salt mines in the world. It is also one of Poland’s most popular tourist attractions, with about 1.2 million visitors each year.

The Wieliczka mine is known to many as ‘the Underground Salt Cathedral of Poland.’ In 1978, the mine was placed on the original UNESCO list of the World Heritage Sites and it is one of Poland’s official national Historic Monuments.

The Wieliczka salt mine reaches a depth of 327 metres and is over 287 km long. My visit began by climbing down the deep wooden staircase with 378 steps that leads to a level 64 metres below the ground. From here, a 3.5 km touring route winds through the mines, although this amounts to less than 2% of the full length of the passages in the mines. 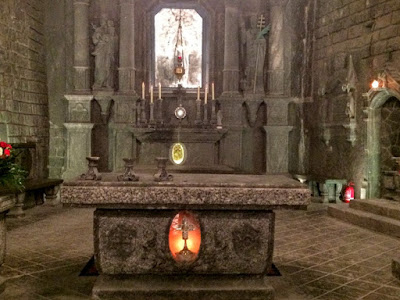 A chapel as large as a basilica is one of four chapels in the salt mines (Photograph: Patrick Comerford, 2016)

Along the tour there are vast networks of corridors and galleries, with dozens of statues of Polish heroes, mythical figures and elves. Four chapels are carved into the rock salt, including one the size of a basilica that is still used for early Sunday masses. There are exhibits of salt-mining techniques and technology, and an underground lake135 metres underground. 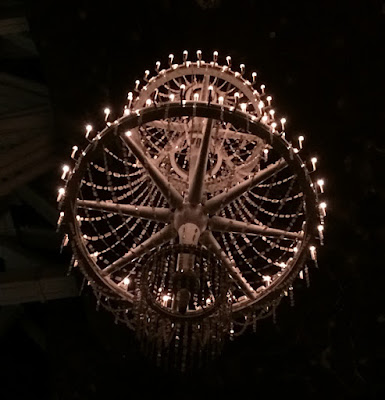 The older sculptures have been supplemented with new carvings by contemporary artists. Even the crystals of the chandeliers are made from rock salt that has been dissolved and reconstituted to achieve a clear, glass-like appearance.

The mines also include a café, restaurant, banqueting hall, souvenir shops and a spa and health complex.

For centuries, the rock salt in Wieliczka was regarded as one of Poland’s major natural assets. It is naturally grey in various shades, resembling unpolished granite, unlike the white or crystalline look we expect because of the colour of table salt. 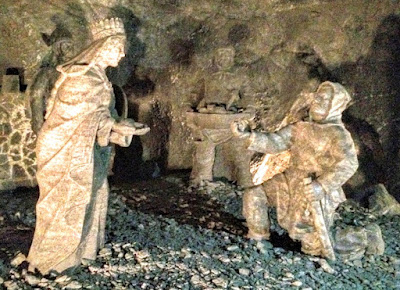 The story of Princess Kinga and her ring is told in one of the exhibits (Photograph: Patrick Comerford, 2016)

One display tells the legend that the salt in Wieliczka came as the dowry of Saint Kinga or Cunegunda. The Hungarian princess was engaged to Prince Bolesław V ‘the Chaste’ of Kraków. As part of her dowry, she asked her father, King Béla, for a lump of salt, as salt was highly valued in Poland. King Béla brought her to a salt mine in Máramaros, where she threw her engagement ring into a mineshaft before leaving for Poland.

When the princess arrived in Kraków, she asked the miners to dig a deep pit, and when they hit rock they found a lump of salt. When they split the rock in two, they discovered the princess’s ring. And so, Saint Kinga become the patron saint of salt miners in Poland.

Myths apart, the rock salt was first discovered in Wieliczka in the 11th century, and the first shafts were dug in the 13th century. The head office of the mining company is at the Saltworks Castle in Wieliczka, which was built in the late 13th and early 14th centuries.

Enriched by the deposits of salt, Wieliczka received its own town charter in 1290. Over the centuries, more shafts were opened and at each phase new technology was introduced as it developed. The displays illustrate these methods, including the Hungarian-type horse treadmill and Saxon treadmills, used to haul the salt to the top of the surface.

The miners were both religious and superstitious. They believed there work was continued by elves in the night, but also built chapels to pray for protection in their dangerous work.

An act of defiance against the Nazis? … a Star of David carved into the salt rocks deep underground (Photograph: Patrick Comerford, 2016)

During the Nazi occupation of Poland, the shafts were used by the occupying Germans as an ad hoc facility for war-time industries. Several thousand Jews were transported from the forced labour camps in Plaszow and Mielec to the Wieliczka mine to work in an underground arms factory set up by the Germans.

However, manufacturing never began as the Nazis planned as the Soviet troops were advancing through this part of southern Poland. Some of the machines and equipment was taken apart and moved to Liebenau in the Sudetes mountains, and the Jews here were forcibly moved on to factories in the Czech Republic and Austria.

Jacob Bronowski filmed parts of The Ascent of Man in the mine and notable visitors over time have included Copernicus, Goethe, Humboldt, Chopin, Pope John Paul II and Bill Clinton. Some of these visitors have been honoured with figures carved and sculpted into the rock salt.

Eventually I had reached a depth of 135 metres. Four cages, each holding nine people, brought us back to ground level and out into the open autumn skies above. 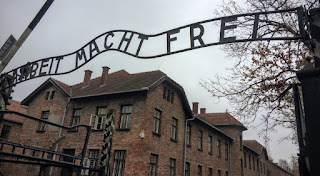 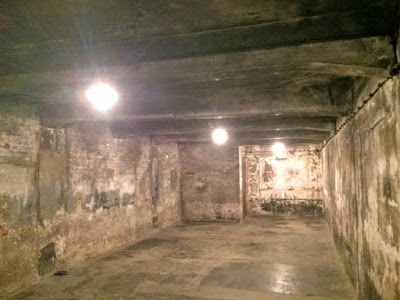