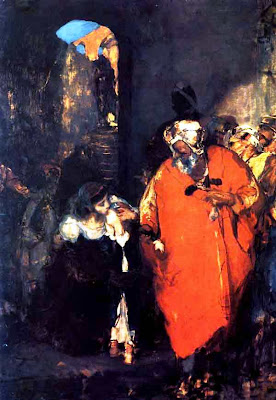 One of the best-known works in the collection of 19th century Greek paintings in the National Gallery of Greece in Athens is The Levy of Christian Children by Nicholas Ghyzis (1842-1901).

The Janissaries were introduced to the Turkish army in the 14th century as a permanent component in an army raised by feudal levies. The best of Christian boys, both in brain and brawn, were taken from their families as tribute in the levy known as the devsirme. The Janissaries were feared even by the sultans: Osman II in 1622, and Selim III in 1807 were killed by Janissaries, and it was not until 1826 that Mahmut II had the power and the strength to disband the Janissaries.

However, the blood of Greeks flowed through the veins of Janissaries, the viziers, and even the sultans. Despite claims by Ataturk in the 20th century to a pure Turkish identity, forced conversions, the wholesale transfer of villages and communities, and the families of the Janissaries and even the sultans themselves are guarantees that many Turks have Greek ancestry. 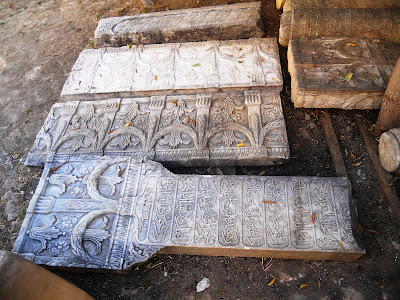 Scattered Turkish gravestones at a former mosque in Rethymnon ... is it possible to erase the memory of a once-pluralist society? (Photograph: Patrick Comerford, 2012)

While a significant proportion of Turks are of Greek (and Christian) descent, a significant number of Greeks are of Anatolian origin too. This conflict of identities may help to understand the way interfaith dialogue can contribute imaginatively to debates about European identity and the role of the European Union in conflict resolution.

If Turkey and Greece have been forced to play the role of protagonists, it is partly due to the fact that Christianity and Islam played similar roles in defining Greek and Turkish identities as the new Greek and Turkish societies emerged in the 19th and early 20th centuries.

But if religion, poetry, music and art played roles in setting the limits of those identities, it was more difficult to erase the monumental memories left behind in stone and architecture. 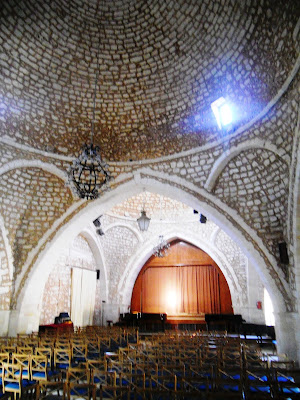 Inside the Nerantze Mosque in Rethymnon ... built as the Church of Santa Maria, and in the style of Saint Mark’s in Venice (Photograph: Patrick Comerford, 2012)

Travelling through Crete this summer, I found how it was impossible to erase the memory of a once-pluralist society with a variety of religious buildings surviving in towns such as Rethymnon and Chania, although many churches had been converted into mosques by the Ottoman Turks and many mosques had been converted into churches after Crete became part of the modern Greek state.

During over three centuries of Turkish presence in Crete, churches and public buildings were converted into mosques: in Rethymnon, for example, the Loggia became the Kucuk Haci Ibrahim Agca mosque, the Church of Santa Maria the Nerantze mosque, Santa Sophia the Ibrahim mosque, Santa Barbara Monastery the Kara Musa Pasha Mosque, Saint Onofrio’s the Veli Pasa Mosque, and Saint Nicholas Cathedral in the Venetian Fortezza the Ibrahim Han Mosque. 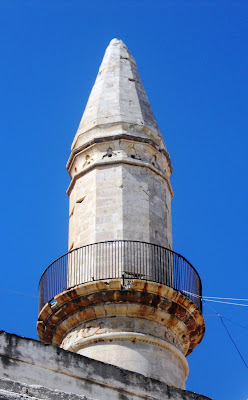 When Crete became part of Greece, the Turkish population was expelled and the mosques became churches once again, sometimes with new dedications, so that the Nerantze Mosque became the Church of Saint Nicholas.

Later, those mosques that could not continue to sustain a life as churches became museums or public buildings: the Nerantze mosque later housed the Music School, the Loggia the Civic Museum and the Kara Musa Pasha Mosque became home to the Inspectorate of Byzantine Antiquities.

Although there are no Turkish Muslims living in Rethymnon today, the town still has many Turkish antiquities, including fountains, hamans, Ottoman balconies, and the substantial remains of eight mosques – seven in the town and an eighth mosque on the Fortezza. A ninth mosque once stood on the corner of Koronaíou Street and Riga Feraíou Street, but this was badly damaged by bombing in 1941 during World War II and was demolished. They are reminders of almost 300 years of a Turkish presence.

The Roman Catholic church in Rethymnon, which is run by Capuchin friars based in Chania and was built in the closing days of the Ottoman presence in Crete. It too is a reminder of the diversity once found in the town’s Christian population and a tolerance and pluralism that the Ottomans could exercise at times. 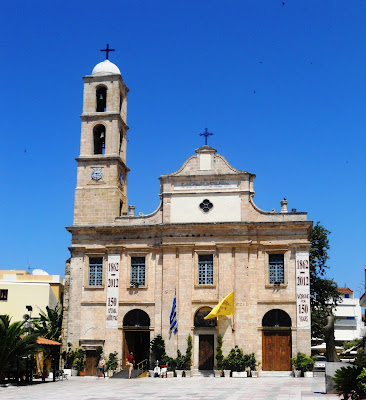 On a sunny Sunday afternoon, I strolled through Chania, the former capital of Crete when it was an autonomous island in the 19th century, caught between the competing claims of the Ottoman Turks and the new Greek state. There I was reminded of the diversity and the jig-saw identities that go to make up the full story of Greece and its inheritance.

The Greek Orthodox Cathedral of the Three Martyrs, was built a century and half ago in 1862 on the site of a former church that had been converted into a soap factory by the Turks. It stands in a square where the Greek freedom fighter Ioannis Vlachos, known as Daskalogiannis, was tortured, skinned alive and executed in 1770. 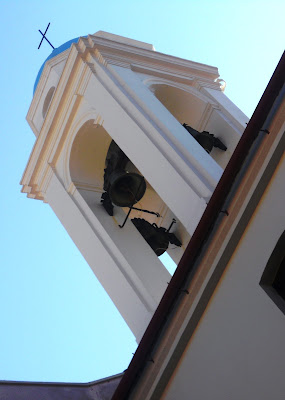 Across the street are two reminders that even the Christians of Chania had a diverse background and identity. The Archaeological Museum is housed in the former Venetian church of San Francesco. It too had been converted into a mosque by the Turks, and its campanile has long vanished, but an alleyway next door leads into a courtyard the elegant Capuchin Church and Friary. 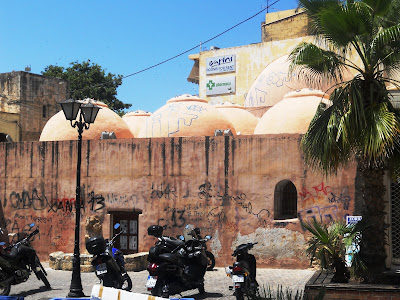 A collection of domes over an old Turkish haman or bathhouse in Chania (Photograph: Patrick Comerford, 2012)

A few steps down the hill, a collection of domes over a fashionable boutique look at first like a former mosque. But this is an old Turkish haman or bathhouse. 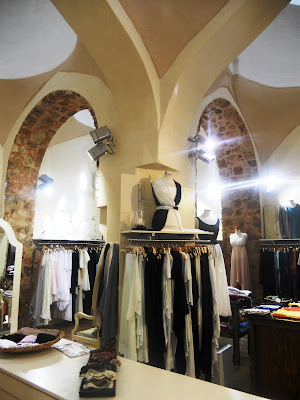 A fashionable boutique inside an old Turkish haman in Chania (Photograph: Patrick Comerford, 2012)

The Mosque of the Janissaries on the Venetian harbour front in Chania was built in 1645 and is the oldest Ottoman building in Crete (Photograph: Patrick Comerford, 2012)

As I arrived at the harbour that afternoon, I was reminded once again of those Greek children who became the Janissaries and heartbreak of the devsirme depicted in The Levy of Christian Children by Nicholas Ghyzis as I visited the Mosque of the Janissaries on the old Venetian harbour front. 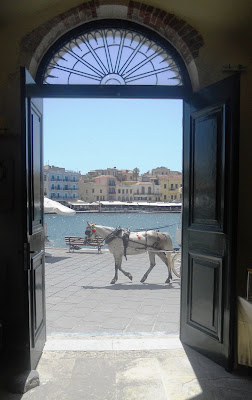 With nearby restaurants and horse-drawn carriages, the Mosque of the Janissaries is a major tourist attraction (Photograph: Patrick Comerford, 2012)

The Küçük Hassan Pasha Mosque, also known as Yali Mosque (the Seaside Mosque) and the Mosque of the Janissaries, is the oldest Ottoman building in Crete. It was built shortly after the Ottoman conquest of Chania in 1645, when the city became the Turkish capital of Crete.

The building stopped functioning as a mosque in 1923 when the last Muslims of Chania were transported to Turkey, and the minaret was later destroyed during the bombings of World War II. 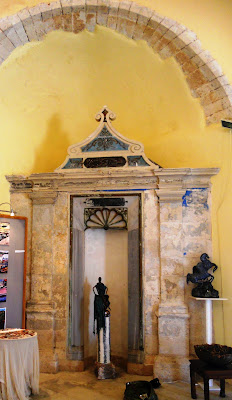 The former mihrab in the Mosque of the Janissaries, now used as a centre for arts and crafts (Photograph: Patrick Comerford, 2012)

But the mosque, its dome and its mihrab or prayer niche have been restored since then, and it has become a major attraction for tourists, with restaurants clustered around its walls and horse-drawn coaches making it one of the major sites on their tours. It once housed the Chania museum, and now hosts small art exhibitions and craft stalls. 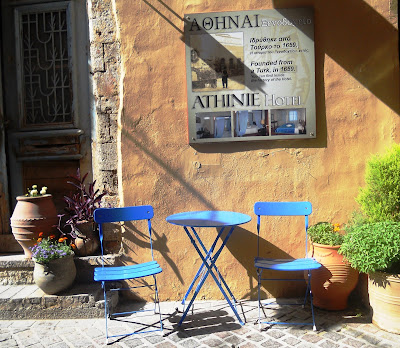 The Athena Hotel claims to be one of the oldest in Chania, founded by a local Turk in 1659 (Photograph: Patrick Comerford, 2012)

Lost in the narrow backstreets and alleyways behind the harbour, we came across more archaeological and architectural legacies from the Ottoman era, including fountains, old mansions and the hint of minaret here, an overhanging Ottoman balcony above, or what may have been a haman over there. The Athena Hotel claims to be one of the oldest in Chania, founded by a local Turk in 1659. 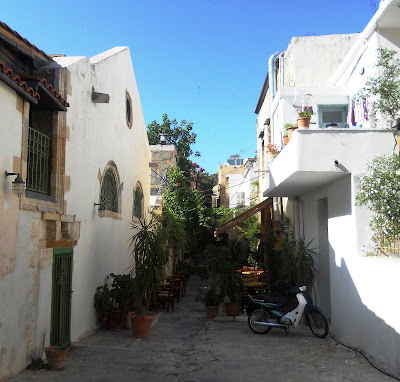 As we strolled through the backstreets behind the harbour, we soon found ourselves in the former mediaeval Jewish quarter, still known as Evraiki or the Hebrews’ Area Here there are narrow alleys and old charming buildings, many restored as hotels, restaurants, shops and bars, and there is even a bar called the Synagogue. 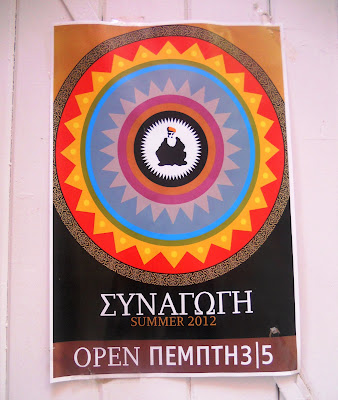 A bar called the Synagogue in the old Jewish quarter of Chania (Photograph: Patrick Comerford, 2012)

We strolled on a little further and found Etz Hayyim, the 15th century synagogue. It is the only surviving synagogue on the island and has been restored in recent decades. On 29 May 1944, the entire Jewish Community in Chania was arrested and held in Aghia Prison, before being transported to Iraklion. There they were forced onto a ship that was to take them to Athens and certain transportation to Auschwitz. Tragically, the Tanais was torpedoed by a British submarine near the island of Milos, and the 276 Jews from Chania were drowned, along with 500 Italian and Greek prisoners and partisans.

The Jewish cemetery in Chania was destroyed too as the Nazis set about obliterating 2,300 years of Jewish life on Crete. For over half a century, the desecrated and deserted Etz Hayyim was the sole Jewish monument on Crete. But from 1996, the synagogue was painstakingly restored, thanks to the vision and determination of Dr Nikos Stavroulakis, a Jewish art historian, museum designer and curator whose father was from Chania.

The synagogue was rededicated in 1999, and continues to function, although very rarely is there a minyan or quorum of the 10 Jewish males required for formal prayer. The names of the 276 Jews who perished are inscribed on a plaque in a garden cemetery behind the synagogue.

It is a sign of the times – and a sad reminder of the dangers brought by the rise of the far-right in Greece today – that there is a permanent police presence outside the synagogue, even when it is closed. Yet, despite two recent arson attacks, the notices outside offer an inclusive welcome and Etz Hayyim symbolises the vitality of Jewish life in Crete. 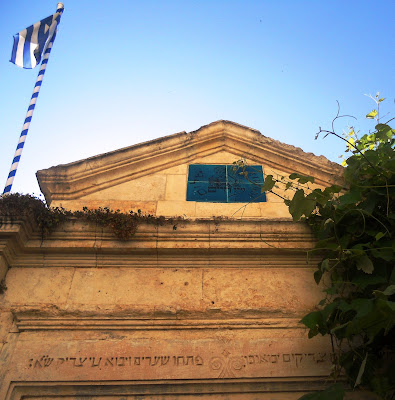 The Greek flag and an inscription in Hebrew over the entrance to the Etz Hayyim synagogue in Chania (Photograph: Patrick Comerford, 2012)

Commenting on the bitter irony of the forced removal of the Turks of Crete, the Cretan historians Alkmini Malagari and Haris Stratidakis have said “it came at a time when there was no longer any cause of division between the two communities.”

The basis of the exchange was religion rather than language or national consciousness. Greeks were defined not as Greek-speakers, for many of them still spoke Turkish as their first language, but as members of the Greek Orthodox Church; Turks did not include those Greeks who had arrived in recent waves from Anatolia and who spoke Turkish, but instead were defined by their Muslim faith, and included, for example, Greek-speaking Muslims from Crete.

The survival of mosques and synagogues in Crete illustrates how buildings call tell our shared stories (Photograph: Patrick Comerford, 2012)

It is remarkable that the two principals in the Asia Minor Catastrophe after World War I, Eleftherios Venizelos and Mustafa Kemal Ataturk, should have been born where they were: Venizelos was born in 1864 in Chania when Crete was still part of the Ottoman Empire; Ataturk was born in 1881 in Thessaloniki, and spent his childhood and his early military days in what would become the second city of Greece.

Could Venizelos have remained a Turkish citizen? Could Ataturk, who enjoyed wearing suits cut by the best Armenian and Greek tailors of the day, have become a Greek citizen had he stayed in the city of his birth?

The survival of Turkish mosques and Jewish synagogues in Crete may raise questions about whether, in telling the story of how modern Greek identity was shaped, there is a place for the contribution of Muslims and Jews to the life and culture of Greece.

But they also illustrate in stone how buildings from the past call tell the story of our shared European heritage, and can contribute too to interfaith dialogue and political reconciliation.

Canon Patrick Comerford is Lecturer in Anglicanism and Church History, the Church of Ireland Theological Institute, and a canon of Christ Church Cathedral, Dublin. This essay was first published in October 2012 in the Church Review (Dublin and Glendalough) and the Diocesan Magazine (Cashel and Ossory).