Looking at the human Luther and
asking questions about his legacy 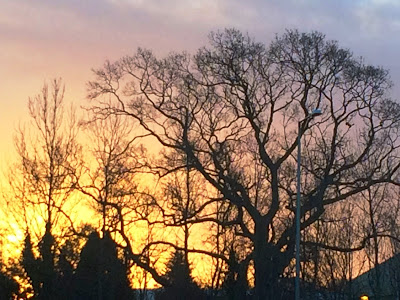 As part of the preparation for the 500th anniversary of Luther nailing his 95 Theses to the door of the castle church in Wittenberg in 1517 staff and students from the four main theological colleges in Ireland are looking at the legacy of Luther and asking the question: ‘Who Owns Luther?’

The Revd Professor Laurence Kirkpatrick of Union Theological College, Belfast, asked ‘Who Owns Luther?’ In his broad-brush approach to the life and work of Luther, he introduced the human Luther and not just the theologian.

In his introduction, he talked about the way the popularity of television programmes has introduced many people to history, including church history. But he also said church history allows us to “have a pop at all the other problems,” including economics, politics and social issues.

In introducing Martin Luther (1483–1546) the man and some of the issues that arose in his time, he looked at his German social and political background, his peasant background, his education at Erfurt University at the beginning of the 16th century, and his early angst and existential crisis (anfectung).

Luther joined the Augustinian order on 17 July 1505, was ordained in 1507 at the age of 24, and completed his doctorate in Wittenberg in 1512. During that time, he also visited Rome in 1510, and had his Tower Experience (Turmerlebnis) which was a major changing moment in his life.

Luther’s teaching emphasised Bible scholarship, particularly the Pauline epistles. But he was also challenged by the sale and purchase of indulgences and the use of relics. He denounced the Dominican friar Johann Tetzel and his sales drive with indulgences. Half the proceeds went to Pope Leo who was building Saint Peter’s Basilica in Rome, but the other half went to a local archbishop who had borrowed large sums of money to secure his episcopal office. Luther believed the people were being tricked, and drafted his 95 Theses.

But did Luther ever nail his 95 Theses to the door of the castle church in Wittenberg? The church doors served as the notice board of the university, the 95 Theses were first written in Latin, and many of them appeal directly to the church.

Questioning whether indeed the incident of nailing the theses to the church door ever happened, he pointed out that they were translated and printed only at a later date, and this popularised them and gave them wide circulation. But the nailing incident is first written about 29 years later, and may have never happened.

Luther’s conflict has been dated to this incident in 1517, but his first conflicts dates occurred over a longer span from 1517 to 1520, with public disputes, debates and publications, and was marked by events such as the death of the Emperor Maximillian in 1519, the election of Charles V, and the debate with Eck on papal primacy in 1519 in Leipzig.

Luther continued writing, and the Papal bull Exsurge Domine, listing 41 errors, came with an ultimatum to Luther to submit and recant or be excommunicated.

Luther arrived at the Diet of Worms in 1521 to a hero’s welcome. But the Edict of Worms convicted him of heresy. Despite an offer of safe conduct, he was kidnapped. While he was imprisoned in a castle, he started translating his German Bible.

But did his followers go too far? When Andreas Karlstadt introduced his new mass at Christmas 1521, Luther preached caution, appealed for calm and called for the restoration or order. He subsequently separated from the Humanists and the Radicals, and Dr Kirkpatrick questioned Luther’s role in suppressing the Peasants’ Revolt in 1525. Luther sided with the nobility and this brought an end to his popularity.

The term Protestant only came into use at a later stage, after 1529. Luther died in Eisleben on 18 February 1546. 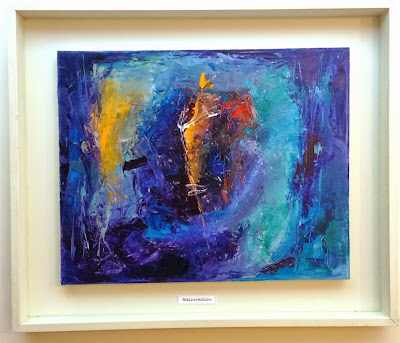 ‘The Resurrection’ … a painting in the Emmaus Retreat Centre (Photograph: Patrick Comerford, 2015)

At the end of his lecture, Dr Kirkpatrick briefly touched on Luther’s anti-Semitism, which I find the most disturbing part of Luther’s life.

Luther’s virulent anti-Jewish writings had a significant influence on German anti-Semitism, and in his later career he denounced the Jewish people and urged for their harsh persecution.

In the week we have been remembering the 70th anniversary of the liberation of Auschwitz and commemorating the Holocaust, serious questions need to be asked about Luther’s role in the shaping of German, European and Christian expressions of anti-Semitism.

Yet, at an early stage of his life, Luther had very different views. In 1519 he challenged the view known as Servitus Judaeorum (“Servitude of the Jews”), established in Corpus Juris Civilis by Justinian I (529–534). He wrote: “Absurd theologians defend hatred for the Jews. … What Jew would consent to enter our ranks when he sees the cruelty and enmity we wreak on them – that in our behaviour towards them we less resemble Christians than beasts?”

In 1523, he condemned the inhuman treatment of the Jews and urged Christians to treat them kindly. He wrote: “If I had been a Jew and had seen such dolts and blockheads govern and teach the Christian faith, I would sooner have become a hog than a Christian. They have dealt with the Jews as if they were dogs rather than human beings.”

Later, however, Luther campaigned against the Jews in Saxony, Brandenburg, and Silesia, and in Wittenberg in 1543 he published his 65,000-word treatise On the Jews and Their Lies. There, he says that the Jews are a “base, whoring people, that is, no people of God, and their boast of lineage, circumcision, and law must be accounted as filth.”

His language is vile and disgusting as says the Jews are full of the “devil’s faeces ... which they wallow in like swine.” He says the synagogue is a “defiled bride, yes, an incorrigible whore and an evil slut,” and he argues that their synagogues and schools should be set on fire, their prayer books destroyed, rabbis forbidden to preach, homes razed, and property and money confiscated.

It is shocking to read him as he says they should be shown no mercy or kindness, afforded no legal protection, and these “poisonous envenomed worms” should be drafted into forced labour or expelled for all time. He also seems to advocate their murder, writing: “We are at fault in not slaying them.”

Later, in Of the Unknowable Name and the Generations of Christ, he uses ugly imagery as he equates Jews with the Devil.

Luther’s anti-Jewish rhetoric contributed significantly to the development of anti-Semitism in Germany, and in the 1930s and 1940s provided a foundation for Nazi attacks on Jews.

The Anglican church historian Diarmaid MacCulloch believes Luther’s On the Jews and Their Lies provided a blueprint for the Kristallnacht, when Bishop Martin Sasse of Thuringia applauded the burning of the synagogues on Luther’s birthday, 10 November 1938. Many pastors, bishops, and theologians used Luther’s writings to call for a “de-Judaised” form of Christianity and to justify early Nazi measures against the Jews.

As we came to a close this morning, Dr Kirkpatrick spoke of theology as an exercise where you “stretch your mind and feed your soul.” We certainly did that as we wrestled with Luther and his legacy this morning. 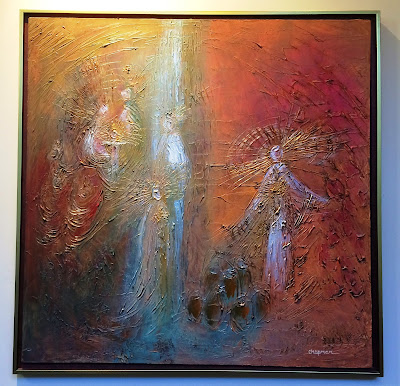 Posted by Patrick Comerford at 12:41 No comments: