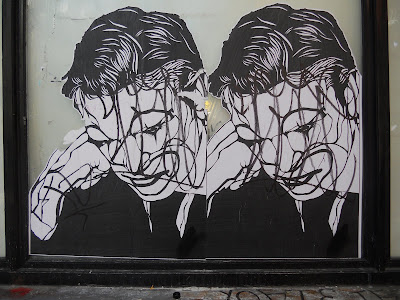 Street art in Temple Bar this afternoon ... the window of a vacant shop (Photograph: Patrick Comerford, 2012)

The spring sunshine and the fact that Saint Patrick’s Day has fallen at a weekend has created a festive atmosphere in the city centre in Dublin.

There is a large number of tourists, particularly in the Temple Bar area, many dressed in green, and some wearing those silly green hats with attached red beards.

I had the role of deacon at the Cathedral Eucharist in Christ Church Cathedral this morning, reading the Gospel and administering the chalice at the Eucharist. The setting was William Walton’s Missa Brevis and Canon Aisling Shine preached on the theme of Mothering Sunday. 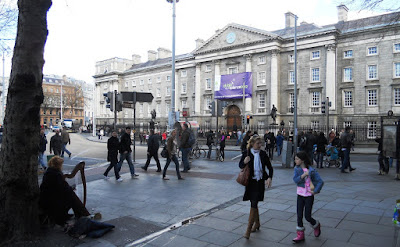 Two of us had a light lunch in Corfu, the Greek restaurant in Parliament Street, and I then went rummaging through the second-hand book barrows in Temple Bar, and strolled on down to College Green, where a harpist busking outside Books Upstairs in front of Trinity College seemed to attract extra attention from tourists, delighted to see an Irish harp being played in Dublin on Saint Patrick’s Weekend. 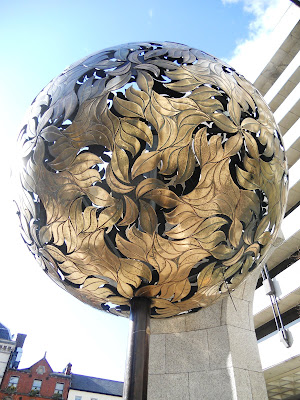 The sculpture outside the Central Bank this afternoon ... but the ‘Occupy’ protesters were removed before the weekend (Photograph: Patrick Comerford, 2012)

It is a pity that the ‘Occupy’ protesters were removed from the square in front of the Central Bank. They added colour to the city centre, and might have shown tourists that there is still dismay and outrage in our city at the way bakers have destroyed our economy. In many ways they have been the conscience of this city for the past few months.

I returned to the cathedral for Choral Evensong, which included settings by William Byrd (1540-1623) for the Preces and Responses, and by Henry Purcell (1659-1995) for the canticles Magnificat and Nunc Dimittis, along with Purcell’s anthem, Jehova, quam multi sunt hostes mea.

After coffee in Toffoli in Castle Street, the sun was setting behind the former Synod Hall, and the tourists were still arriving at the doors of the cathedral.

The sunset lasted for another half-hour, and there’s another day left in this holiday weekend in Dublin. 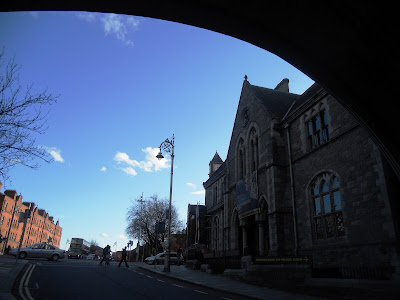 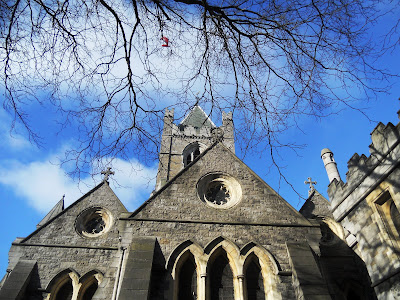 ‘the church spire / Opens its eight bells out ...’ Christ Church Cathedral on a sunny Sunday morning at the end of February (Photograph: Patrick Comerford, 2012)

“Does Sunday any longer carry religious associations, or is it basically a convenient device for giving society an opportunity for relaxation and recreation one day in seven?”
This question was posed some years ago the English theologian, Frederick William Dillistone* (1903-1993), in ‘The Holy Hush of Sunday Morning,’ an essay in the journal Theology Today.

But he pointed out: “By a strange coincidence, four of the major poets of [the 20th] century have each written a poem, using ‘Sunday Morning’ in the title (Wallace Stevens, Louis MacNeice, TS Eliot, Robert Lowell) … Many of the old emblems may be vanishing, but we still need some symbol to mark the sanctification of time.” (FW Dillistone, ‘The Holy Hush of Sunday Morning,’ Theology Today April 1976, 33: 15-23).

For my Poem for Lent this morning I have chosen ‘Sunday Morning’ by Louis MacNeice.
In poems such as ‘Sunday Morning,’ MacNeice speaks as a city dweller in an unforced way, observing the scene with detached but sympathetic irony.

In 1934, having twice had the manuscript of his second book rejected by TS Eliot, the poetry editor at Faber, MacNeice obliged Eliot by producing what he required: the longish poems which begin the book Poems, published in 1935. The first poem, ‘An Eclogue for Christmas,’ known for its opening line, ‘I met you in an evil time,’ came complete with a strenuous modernity and a whiff of ‘The Waste Land’:

I who was Harlequin
in the childhood of the century.

Other lines in Poems echo MacNeice’s friend, WH Auden, whose poetry had been accepted by Eliot for publication by Faber five years earlier: “Thousands of posters asserting a monopoly of the good, the beautiful, the true.”

But there are poems too in which MacNeice is unmistakably his own, including the mysterious ‘Snow’ and the suburban snapshot in ‘Sunday Morning’:

Down the road someone is practising scales,
The notes like little fishes vanish with a wink of tails.
Man’s heart expands to tinker with his car
For this is Sunday morning, Fate’s great bazaar.

At this stage of his life, MacNeice was lecturing in classics at the University if Birmingham and living in suburban Selly Park. There, the urban imagery which he had learned to admire in Eliot became part of his own felt experience. In poems such as ‘Belfast,’ ‘Birmingham,’ ‘Sunday Morning,’ and ‘An Eclogue for Christmas,’ MacNeice speaks as a city dweller observing life around him with detached but sympathetic irony.

During MacNeice’s childhood in Northern Ireland, churchgoing and the sanctity of Sunday morning were unquestioned. But by the 1930s, the pattern of life on a Sunday morning in the suburbs of Birmingham and other English cities and towns had become very different, with no restrictions on noise:

Down the road someone is practising scales,
The notes like little fishes vanish with a wink of tails.

Nor were there any restrictions on movement:

Man’s heart expands to tinker with his car.
For this is Sunday morning, Fate’s great bazaar.

Nor was Sunday morning any longer a time for renewing devotion to God. Instead, it had become an opportunity to cash in on whatever time and opportunity Fate was offering:

… concentrate on this Now
And you may grow to music or drive beyond
Hindhead anyhow.

Music and movement become ends, not means, and Sunday, the day when they can be exercised to the full, is “a small eternity to the week of time.”

But, ironically for MacNeice, it is the sound of the church bells that challenges this all-absorbing “Now.” Alhough they ring on Sunday, their rhythm and regularity are the same as that of “weekday time.” No music or movement allows an escape from that time which “deadens and endures.”

Sunday morning was once the sacrament of the joys of the endless heavenly Sabbath. Now the suburban people in the poem are enjoying their Sunday rest in apparent but not real peace.

In the last four lines, we notice that something is definitely wrong. From the churchyard, skulls mouths tell us that this Sunday morning may look very pleasant with its music and odd jobs, but getting away from an unpleasant reality is an illusion, and the trudge of the working weekday remains inescapable.

Down the road someone is practising scales,
The notes like little fishes vanish with a wink of tails,
Man’s heart expands to tinker with his car
For this is Sunday morning, Fate’s great bazaar;
Regard these means as ends, concentrate on this Now,

And you may grow to music or drive beyond Hindhead anyhow,
Take corners on two wheels until you go so fast
That you can clutch a fringe or two of the windy past,
That you can abstract this day and make it to the week of time
A small eternity, a sonnet self-contained in rhyme.

But listen, up the road, something gulps, the church spire
Opens its eight bells out, skulls’ mouths which will not tire
To tell how there is no music or movement which secures
Escape from the weekday time. Which deadens and endures.