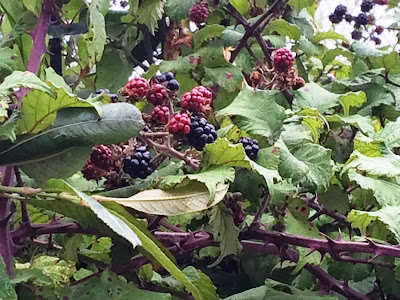 Blackberries in the brambles on the side of Sea Road in Kilcoole, Co Wicklow, this afternoon (Photograph: Patrick Comerford, 2014)

The holidays are over, the students are back, schools have reopened, and this afternoon it seemed summer had come to an end as the rain poured down in Greystones, Co Wicklow.

After a busy week that came immediately after a busy working weekend, two of us took the opportunity late this afternoon to have a late lunch in the Happy Pear in Greystones.

Despite the over-hanging grey clouds, the tables on the pavement outside still seemed inviting and we wondered whether this would be our end-of-season to eat al fresco.

When does summer end? Some say summer ends on the last day of August, but it feels summer has stretched into these first few weeks of September, with warm sunny days.

Others say the day of the autumn equinox is the last day of summer in the Northern Hemisphere, when the sun’s illusionary path in the sky is right over the equator. That day varies from year to year: last year it fell on Sunday, 12 September. This year, in Ireland and England, the autumn equinox is at 03:29 on Tuesday, 23 September.

Perhaps this is stretching our definition of summer, for that would extend the three months on autumn to 23 December, only two days before Christmas, which must surely be “in the bleak mid-winter.”

But certainly, summer ends long before the clocks go back in Europe when summer time ends this year on Sunday 26 October 2014. 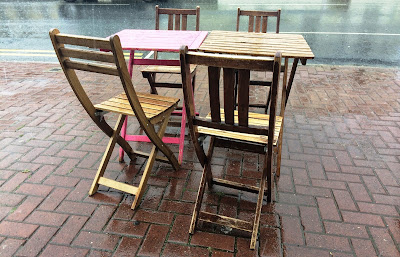 And it certainly felt like summer had come to a dramatic end this afternoon when those over-hanging grey clouds opened and poured down as we were beginning our double espressos.

We quickly moved tables, and sat under the awning outside the Happy Pear as people fumbled for coats and umbrellas, and pulled rain covers over small children in buggies. The teeming rain soon slowed down traffic and then brought it to a halt. Within minutes we were the only people sitting at a table outside the restaurant.

How long would the rain last for? Was this the end of summer? Should we go ahead with our plans to pick blackberries on the road leading down to the beach at Kilcoole? 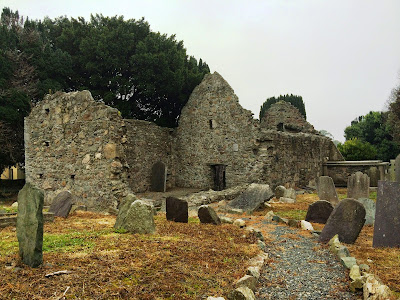 After sitting watching the rain for 10 or 15 minutes, we finally decided to continue on 3 km south to Kilcoole, in the hope that the rain would ease during the short journey.

For the first time, we stopped to see the ruins of the Church of Comhghall or Cill Chomhghaill that gives its name to Kilcoole.

Old Kilcoole Church was probably built in the 12th century and was dedicated to Saint Mary. It stands in a small graveyard that has a number of early 18th century gravestones.

This is a 12th century church, with a nave and chancel, vaulted ceilings and a heavily pitched stone roof, now gone. There may have been a small attic roof over the chancel. The nave has a square Baptismal font, a cross slab and a small round-headed window in the south wall.

The western portion of the church was added later as a two-storey living quarters that may have been a priest’s house.

The keys to the site are kept by the O'Sullivan family next door, but access to the inner part of the church ruins is blocked by heavy railings on the doors and the open roof. 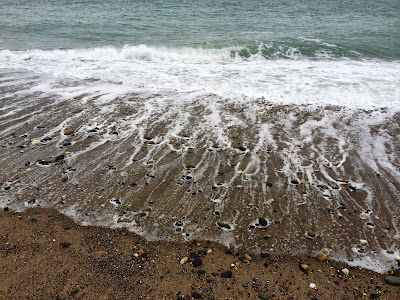 A walk on the beach in Kilcoole this afternoon (Photograph: Patrick Comerford, 2014)

From there, we continued down Sea Road, parked the car, and crossed the train line for a short walk on the beach, before strolling back to pick blackberries on both sides of Sea Road.

As children, we always thought that picking blackberries bridged the time between summer and autumn. And we were told never to pick blackberries after Michaelmas Day, 29 September.

There were other sayings associated with summer folklore:

Michaelmas commemorates the Archangel Michael’s defeat of Lucifer. Folklore said that on his expulsion from heaven, Lucifer landed in a thorny blackberry bush, and he cursed and spat on it.

Is there any scientific truth behind the saying? Well, blackberries have a high concentration of bitter tasting tannins and over time these build up in the berries. Old Michaelmas Day – whether you date it at 29 September or 10 October – falls late in the blackberry season, and so berries picked that late are very bitter indeed.

However, there are still ten more days to Michaelmas. We picked a bowl-full, and then some more … before the rains came again. 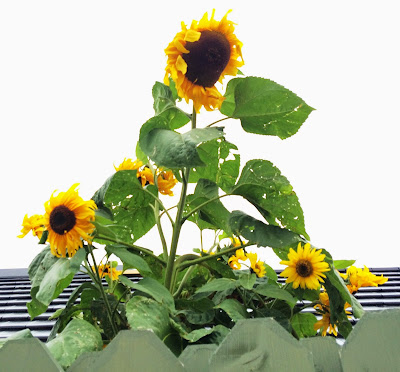 Tall sunflowers without the sunshine near the beach in Kilcoole this afternoon (Photograph: Patrick Comerford, 2014)