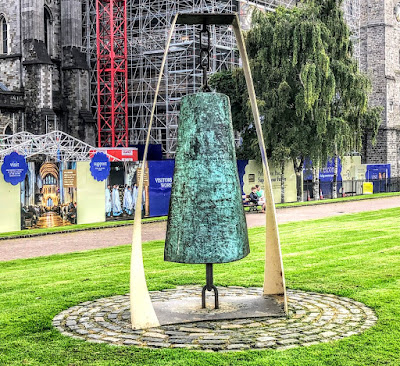 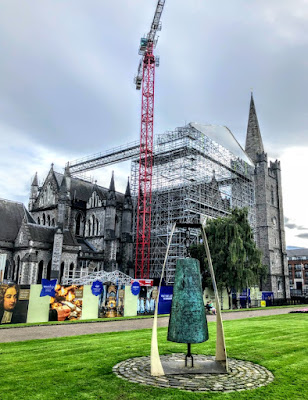 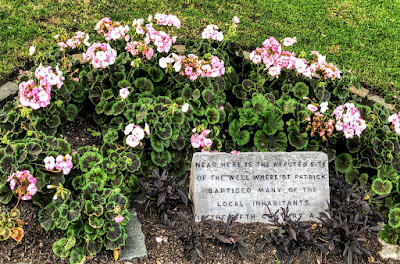 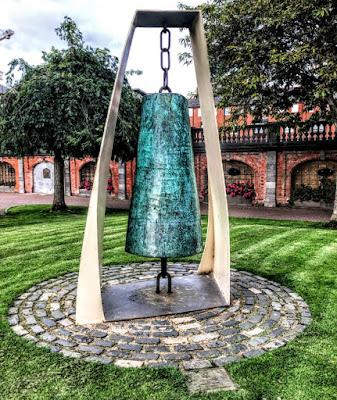 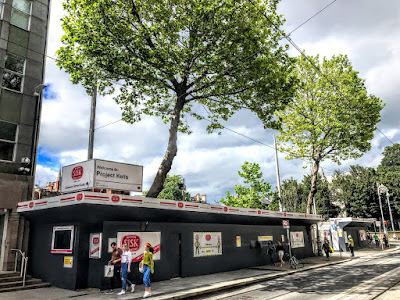 I started my working life on a corner of Dawson Street that has been demolished and is being transformed (Photograph: Patrick Comerford, 2020)

I have been in Dublin just twice since the pandemic lockdown was introduced in March. Those visits were carefully chosen: a family birthday and visits to my GP for consultations about my sarcoidosis and my Vitamin B12 levels.

This week’s visit was a little different. As President of the Irish Campaign for Nuclear Disarmament (CND), I was speaking at the annual Hiroshima Day commemorations in Merrion Square, Dublin – an event I have taken part in almost every year since I was first involved in planting the cherry tree 40 years ago in 1980.

A family member brought me into the city centre in the late morning, and brought me back in the late evening. So, without taking any risks on public transport, keeping social distances, and wearing a facemask throughout the day, I was able to enjoy a day in Dublin for the first time in almost five months.

Although I was born in Dublin, and I moved back to Dublin from Wexford at the end of 1974, it took many years before I felt at home there. If sport provides the Irish definition of where you from, then I still hope every year that Wexford is going to win the All-Ireland hurling final.

But Thursday’s sunshine added to the pleasure of walking around a capital city that is as pleasant as any European capital city I have come to know and enjoy, and there was time to do things that I enjoy in any other elegant European city …

Reminiscing about the book barrows in Clare Street; coffee on the footpath, watching life stroll by on Nassau Street; enjoying the monkeys carved on the old Kildare Street Club building; book browsing in Hodges Figgis; missing Carlucci’s on Dawson Street; a stroll through part of Saint Stephen’s Green; listening to the buskers on Grafton Street …

Stopping for ice cream in Wicklow Street, for another coffee in Drury Street, and buying a birthday card in the George’s Street Arcade

Loose Canon … and Kaph … there is a healthy buzz in life around Drury Street in Dublin (Photograph: Patrick Comerford, 2020)

It was good to feel the healthy buzz of life that percolates throughout the area around Wicklow Street, South William Street, Clarendon Street, Drury Street is still buzzing with coffee shops, small wine bars and chic restaurants.

But it is also interesting to notice how much has changed in Dublin in recent years. When you are in a city day-by-day or week-by-week, you tend not to notice the gradual, incremental changes that take place over time … new cheese and wine shops or coffee bars in Drury Street, the closure of cafés and restaurants like Bewley’s and Carlucci’s …

But perhaps the most startling sight was the complete demolition of the corner of Nassau Street and Dawson Street. I began my adult life training as a chartered surveyor with Jones Lang Wootton on the third floor of what was then the Norwich Union Building on Dawson Street. While there, I turned my attention to journalism, became a freelance contributor to the Lichfield Mercury, and later moved on to the Wexford People and The Irish Times.

Later, many of the cafés at the street level on this corner were important stopping-off places for coffee before or after meetings and lectures in Trinity College, on the way to or from the Church of Ireland Theological Institute.

In other circumstances, my engagement with academic life might easily have been framed on that corner, beginning with the course I followed through Jones Lang with the College of Estate Management in Reading University, including exams in the Science Museum in TCD, and closing with cups of coffee after emerging from Trinity’s Nassau Street Gate.

Now ‘Project Kells’ is going to reshape this corner of Dublin for a future generation. 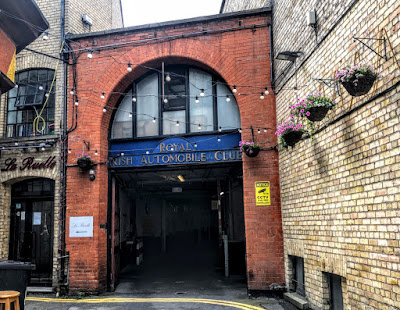 The old RIAC buildings at the top of Dawson Street are about to be transformed (Photograph: Patrick Comerford, 2020)

For some years I was a director of the National Bible Society of Ireland, but its bookshop in the middle of Dawson Street, opposite Saint Anne’s Church, has been closed for many years, and the shop that moved into those premises has closed since.

At the top of Dawson Street, there are plans for a €35 million, 117-bedroom hotel and a redevelopment of the old Royal Irish Automobile Club.

Two of us went on to an early dinner in Glas, a new vegetarian restaurant on Chatham Street, before continuing our evening stroll along Stephen Street, Golden Lane where I had a ‘summer job’ for two years with Irish Printers, through Saint Patrick’s Park, up New Street, into ‘Little Jerusalem’ and along Clanbrassil Street – lower and upper – and over the Grand Canal into Harold’s Cross as the sun was beginning to set in the west.

It was not quite Venice, but Rialto was in the distance to the west, and Portobello was behind me, to the east.

The new rise in Covid-19 cases this week is worrying, and I am not sure when I am going to have another city break in Dublin like this again. 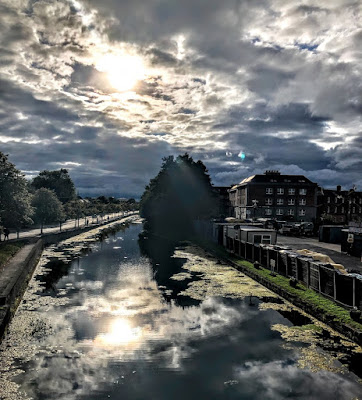