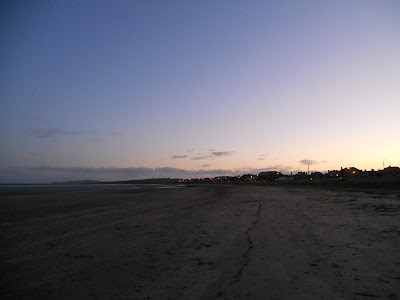 Late evening light in the sky above Skerries this afternoon (Photograph: Patrick Comerford, 2011)

A few years ago, one political party once had a patronising election slogan that declared: “A lot done. More to do.”

It seems like an election-slogan run-up to Christmas as this week moves to a close: A lot done. More to do.”

But the weather is so clear, and the sky so blue, I decided to go for a walk on the beach this afternoon.

Despite the shopping rush, and the end-of-week traffic, it still took little more than half an hour to get from this part of south Co Dublin to Skerries in the late afternoon. The sun was setting behind the little cloud that there was as two of us arrived in Skerries. The tide was out far, and I wondered – just for one moment – what it might be like to walk out to the Martello Tower on Shenick Island.

Strand Street was busy and there was little car parking space. And so we drove on up to the harbour, and stopped awhile in wonder at boats stranded by the low tide. ‘Storm in a teacup’ was still open, and it was good to see the Pier House open again.

We parked on Red Island, and walked down the steps to the beach on the South Strand. There the sand was soft beneath our feet, with a clear-blue sky in the approaching dusk with colours that were more like had the hues you see on a late summer afternoon. 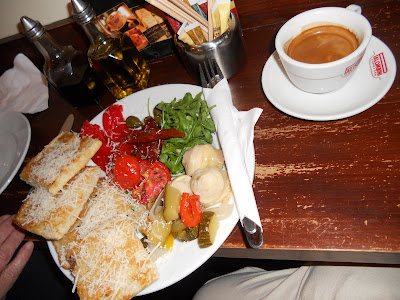 A plate of antipastoin Olive in Skerries ... and the best double espresso in Fingal (Photograph: Patrick Comerford, 2011)

As darkness closed in, we headed across to Olive on Strand Street for a plate of mixed antipasto and the best double in Fingal. It was a pleasure to bump into David Diebold, the editor of Skerries News.

Later, in Gerry’s, we picked up the latest, Christmas edition of Skerries News and the 2012 Skerries Calendar, before strolling up Strand Street, where the trees are decorated and picked out with Christmas lights, and back along the harbour. 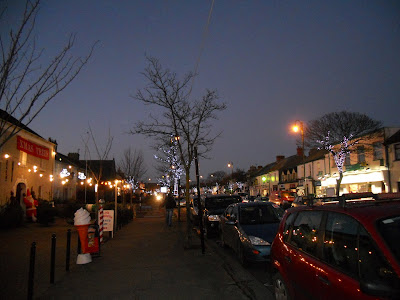 By the time we reached Red Island, it was covered in darkness, but the clear air provided a night sky decked with stars that more than matched the Christmas lights on each side of Strand Street.

Looking north, the lights stretched all the way towards Balbriggan, picking out the coastline in the dark. To the south, below us, the lights of Skerries curved on towards Holmpatrick and Shenick Island, more beautiful than the lights on a Christmas tree.

Today’s edition of the Church of Ireland Gazette [Friday 23 December 2011] publishes the following report and photograph on page 5: 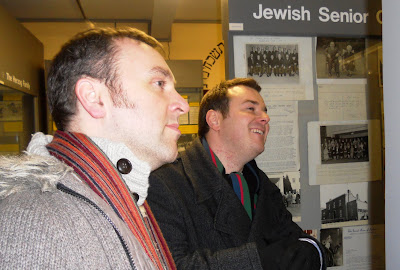 Before Christmas, a group of students from the Church of Ireland Theological Institute recently visited the Irish Jewish Museum in Dublin.

The Year II students from the Liturgy and Spirituality module of the M.Th. course were accompanied by their lecturer, Canon Patrick Comerford.

The small museum on Walworth Road in Portobello is in a part of Dublin that once had such a prominent Jewish community that it was known to generations of Dubliners as ‘Little Jerusalem.’ The museum is housed in a former synagogue that was built in 1917, when two adjoining terraced houses off the South Circular Road were knocked together.

The museum was opened in June 1985 by Chaim Herzog, the then President of Israel, who was born in Belfast and grew up in Dublin, the son of a Chief Rabbi of Ireland.

Debbie Briscoe and Howard Freeman showed the visiting group around both the traditional synagogue upstairs and the exhibits on the ground floor. A unique feature of the Museum’s ground floor is a traditional kitchen, with double kitchen sinks and a typical Sabbath meal setting from a Jewish home of the late 19th and early 20th century in this neighbourhood.

Mrs Briscoe and Mr Freeman also recalled the history of Jews in Ireland over the centuries, including the communities in Dublin, Cork, Limerick and Belfast, and the contribution which Irish Jews to Irish political, social and cultural life.

“In the days leading up to Chanukah and Christmas, this was an opportunity to appreciate the Jewish community’s understanding of sacred space, worship and inculturation, and the story of an important religious and cultural community in Ireland,” Canon Comerford said after the visit.

He added: “There was more than food for thought during this visit, as there should be at all times in interfaith dialogue.” 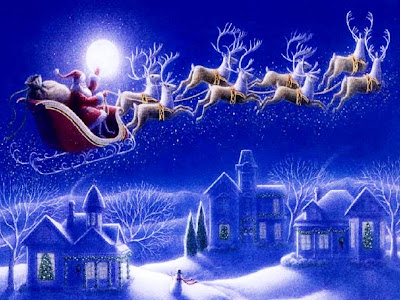 I think my choice of TS Eliot’s poem, ‘The Cultivation of Christmas Trees,’ as my Christmas poem yesterday reminded me of the need, even at my age, to see Christmas through the eyes of a child too.

This morning I have chosen ’T’was the Night Before Christmas by Clement Clarke Moore. Christmas Eve might, at first, seem a more appropriate day for reading this poem. But I thought some readers might like it a day early, and I was reminded too that this poem was first published on 23 December, 188 years ago, in 1823.

You could say that when this poem was first published in 1823 and it was an overnight success. However, it was another 21 years before that Clement Clarke Moore (1779-1863) claimed in 1844 that he was the author of this poem when it was published in collection of his poetry.

Clement Clarke Moore came from a prominent Episcopalian family and his father, Benjamin Moore (1748-1816), was the second Episcopal Bishop of New York and was famous for officiating at the inauguration of George Washington and as President of Columbia University.

Two years before he wrote this poem, Clement Clarke Moore was appointed Professor of Biblical Learning at the General Theological Seminary in New York in 1821, and he held this post he held until 1850. He had already compiled a two-volume Hebrew and English Lexicon (1809), and his collection of poems was published while he was still an academic theologian in 1844.

The grounds on which the General Theological Seminary now stands were his gift to the Church: he donated an apple orchard consisting of 66 tracts to the Diocese of New York for use as a seminary, and building work began in 1827. He also gave land on Ninth and 20th Street for Saint Peter’s Episcopal Church.

Today, he is best remembered, not as a theologian or Biblical scholar but as the author of ‘A Visit from St Nicholas,’ which has since become better known as ‘’T’was the Night Before Christmas.’

Moore wrote this poem for his children and it was first published anonymously in the Sentinel in Troy, New York, on 23 December 1823. It has since been acclaimed as “arguably the best-known verses ever written by an American.” It was reprinted frequently in the years that followed without any acknowledgment of an author. Moore first claimed he was the author of the poem when it was included in an 1844 collection of his poetry at the insistence of his children.

‘A Visit from St. Nicholas’ is largely responsible for the images of Santa Claus that have been popular in the English-speaking world and further afield since the mid-19th century, including his appearance, the night of his visit, his mode of transport, the number and names of his reindeer, and the tradition of bringing toys to children.

Now the tradition of reading ‘’Twas the Night before Christmas’ to children on Christmas Eve is one found throughout the world.

T’was the Night before Christmas by Clement Clarke Moore

’T’was the night before Christmas, when all through the house
Not a creature was stirring, not even a mouse.
The stockings were hung by the chimney with care,
In hopes that St Nicholas soon would be there.

The children were nestled all snug in their beds,
While visions of sugar-plums danced in their heads.
And mamma in her ‘kerchief, and I in my cap,
Had just settled our brains for a long winter’s nap.

When out on the lawn there arose such a clatter,
I sprang from the bed to see what was the matter.
Away to the window I flew like a flash,
Tore open the shutters and threw up the sash.

The moon on the breast of the new-fallen snow
Gave the lustre of mid-day to objects below.
When, what to my wondering eyes should appear,
But a miniature sleigh, and eight tinny reindeer.

With a little old driver, so lively and quick,
I knew in a moment it must be St Nick.
More rapid than eagles his coursers they came,
And he whistled, and shouted, and called them by name!

As dry leaves that before the wild hurricane fly,
When they meet with an obstacle, mount to the sky.
So up to the house-top the coursers they flew,
With the sleigh full of Toys, and St Nicholas too.

And then, in a twinkling, I heard on the roof
The prancing and pawing of each little hoof.
As I drew in my head, and was turning around,
Down the chimney St Nicholas came with a bound.

He was dressed all in fur, from his head to his foot,
And his clothes were all tarnished with ashes and soot.
A bundle of Toys he had flung on his back,
And he looked like a peddler, just opening his pack.

His eyes-how they twinkled! his dimples how merry!
His cheeks were like roses, his nose like a cherry!
His droll little mouth was drawn up like a bow,
And the beard of his chin was as white as the snow.

The stump of a pipe he held tight in his teeth,
And the smoke it encircled his head like a wreath.
He had a broad face and a little round belly,
That shook when he laughed, like a bowlful of jelly!

He was chubby and plump, a right jolly old elf,
And I laughed when I saw him, in spite of myself!
A wink of his eye and a twist of his head,
Soon gave me to know I had nothing to dread.

He spoke not a word, but went straight to his work,
And filled all the stockings, then turned with a jerk.
And laying his finger aside of his nose,
And giving a nod, up the chimney he rose!

He sprang to his sleigh, to his team gave a whistle,
And away they all flew like the down of a thistle.
But I heard him exclaim, ’ere he drove out of sight,
“Happy Christmas to all, and to all a good-night!”

Tomorrow: ‘In the Bleak Mid-Winter,’ by Christina Rossetti.