Extra blessings on the beaches of Skerries and Rush 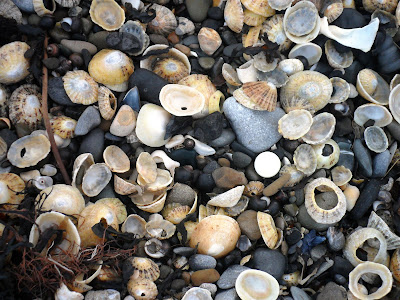 Sea shells on the shore south of the harbour at Rush this afternoon (Photograph: Patrick Comerford, 2011)

I have been blessed this past few days, with our Ash Wednesday retreat in Skerries only four days ago, and a walk along the seashore in Bray two days ago. So it was an extra blessing to be back in Skerries this afternoon for yet another walk on the beach.

Earlier in the morning, we marked the first Sunday in Lent with a presentation on the Spirituality of Mission by Linda Chambers of USPG. Afterwards, I presided the Eucharist, and the preacher was Colin Taylor, speaking on behalf of the Association of Mission Societies.

Following lunch in the Larder with some friends and colleagues from Christ Church Cahedral, two of his headed out to Fingal (north county Dublin), stopping first at Whitestown on the fringes of Rush, where the sun was shimmering on the waters of the estuary at Rogerstown.

On the brow of the hill in the cemetery at Whitestown stand the ruins of Saint Maur’s Church, said to date back to Anglo-Norman times.

The church was named after Saint Maurus, the first disciple of Saint Benedict, and who is also associated with the famous Benedictine Abbey of Glanfeuil, now called St Maur-sur-Loire.

According to legend, a small band of Norman French navigators or crusaders who found themselves caught in a storm made a vow to Saint Maur that if they survived they would build a chapel in his honour on the first point of land they reached. They later landed at Rogerstown Estuary and built a church in honour of Saint Maur, about a mile west of the present village of Rush. 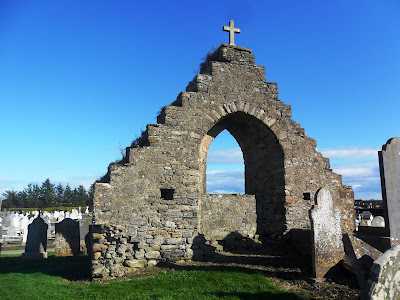 The area became known as Knightstown and later as Whitestown. Rush is later mentioned by Hollinshed as one of the chief haven towns of Ireland. The old church has since fallen into ruins, but the grounds are still used for local burials.

From Rush we headed out along the coast road, getting a clear view of the Mourne Mountains as we reached the brow of the hill at Loughshinny.

Despite a crisp, cold air in Skerries, we walked along the South Beach. There were few families on the beach, but one lone man was standing tall in his kayak, paddling it on a solitary course parallel with the shore.

We headed on up to Red Island, down by the harbour and the Sailing Club, and back down Strand Street for coffee in Olive Deli and Café, where they make the best espresso.

For the fifth successive year, Peter and Deirdre Dorrity at Olive have received awards from the Bridgestone Guide and Georgina Campbell’s Ireland and the Olive has recently received its second award from Lucinda O’Sullivan’s “Great places to eat.”

We headed back again to Rush, with its pretty thatched cottages, to end the day with walks along the tiny beaches clustered along the shore at the harbour.