Neighbours are good neighbours
when we are good friends too 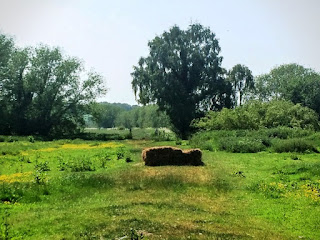 ‘In England’s green and pleasant Land’ … a summer stroll in the countryside in Staffordshire (Photograph: Patrick Comerford, 2016)

I grew up thinking of England as my second home. My generation grew up watching English television, supporting English football teams, and reading English comics magazines and newspapers. I remember school debating teams that were obsessed with British politics.

I have never felt I am an outsider in England. From my teens I was familiar with places in England associated with my family background. My first employer sent me to England when I was 18. I have worked in England, written for English newspapers and magazines, made television programmes with English production teams, and sat on boards and trustee bodies based in England.

I have preached in English cathedrals, churches and college chapels, I have shed tears in the hulk of Coventry Cathedral, I have soared to dizzying heights at Evensong in King’s College Chapel and Westminster Abbey, and I have spent time studying in Cambridge and in Birmingham.

I have found the clock at ten to three in Rupert Brooke’s Grantchester, and have had honey for tea (or at least a hearty lunch) in the Orchard after walking from Trumpington or walking along the ‘Grantchester Grind.’ Yes, I know how a jug of Pimm’s always adds to the feeling that summer has arrived in an English garden, and I also enjoy the pleasures of English cricket, rugby and soccer.

I can spend hours exploring the architecture of the churches, houses and shops of towns like Saffron Walden, Bishop’s Stortford, Calne, Tamworth and Lichfield, or weekends in search of another Pugin church in the Staffordshire countryside or another Tudor timber-framed pub in Hertfordshire or Essex.

But I have also campaigned and protested on the streets of English cities and towns against wars, the arms race and racism, and I have spoken in Hyde Park and Trafalgar Square.

I enjoy strolling through the rolling countryside of Staffordshire, on Wenlock Edge, through Coe Fen, in the Cotswolds and the Peaks, by the white horses of Wiltshire, along the banks of the Tame, the Trent, the Avon, the Severn, or the Thames. I can stand for hours watching rowers and punters on the backs in Cambridge and barges on the canals around Birmingham or the Lea Valley. I enjoy summer in the countryside in what William Blake describes as “England’s green and pleasant Land.” 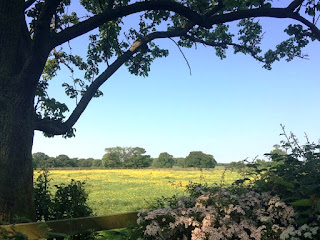 I enjoy strolling through the rolling countryside near Lichfield (Photograph: Patrick Comerford, 2016)

If you want to preserve a romantic vision of England, I understand you. But I want that England to be part of my Europe too.

I am not a foreigner in England. For as long as I can remember, I have been as at home in Lichfield as I am in Wexford or Dublin. For me, there never has been a border between England and Ireland.

In recent years, when I have been asked for a passport travelling between Ireland and Britain, it has usually been by Ryanair staff members checking my boarding pass or by the gardai at Dublin Airport. 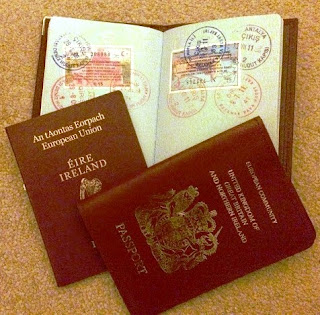 I only travel on my Irish passport (Photograph: Patrick Comerford)

English culture is inseparable from my culture: poets, playwrights, composers, novelists, artists, dramatists, film-makers, television producers, sculptors, sports starts, journalists … we live in overlapping cultures that nurture each other. Who cares – who asks – whether Bob Geldof, Jeremy Taylor, Terry Wogan or Alec Guinness is or was English or Irish? Who remembers that John Betjeman wrote some of his best and most enduring poetry in Ireland? Or, for that matter, that George Herbert was born in Wales, that Vaughan Williams was of Welsh descent, and that TS Eliot was American-born?

It’s only when we get to the extremes that I get embarrassed: William Joyce, ‘Lord Haw-Haw’ was American-born, but was he from Galway or from England? Oswald Moseley and Diana Mitford lived in Co Galway and then in Co Cork after World War II, but no-one in Ireland would want to claim them.

In 1946, Evelyn Waugh travelled throughout Ireland in his quest for a romantic country house. In December 1946, he visited Gormanston Castle, Co Meath, and described it as “a fine, solid, grim, square, half-finished block with tower and turrets.” He made an offer to the owners of the castle, but had a change of heart and withdrew his offer when he read in a Dublin evening newspaper that Billy Butlin was planning a holiday camp nearby at Mosney, his first outside England. Had he bought Gormanston, perhaps I might have been sent to a school in England; instead, his silly snobbery made way for my school.

I do not want to see England, or any other part of the United Kingdom, leave the European Union. If today’s referendum was about the United Kingdom alone, I would not interfere. I would be an observer, a passive – an amused or bemused observer, depending on the result.

As John Donne, the poet and Dean of Saint Paul’s Cathedral, London, wrote:

No man is an island,
Entire of itself,
Every man is a piece of the continent,
A part of the main.
If a clod be washed away by the sea,
Europe is the less.
As well as if a promontory were.
As well as if a manor of thy friend’s
Or of thine own were:
Any man’s death diminishes me,
Because I am involved in mankind,
And therefore never send to know for whom the bell tolls;
It tolls for thee.

Of course, I enjoy my times in Northern Ireland, Scotland and Wales too. I do not want to see a new border from Derry to Dundalk the replicates the only present British land border with the EU – the thin but tortuous border that separates Gibraltar and Spain.

Till we have built Jerusalem,
In England’s green and pleasant Land.