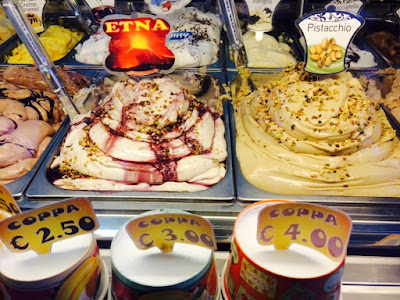 Ice cream in Sicily is like ice cream nowhere else (Photograph: Patrick Comerford, 2015)

In this hot summer weather in Sicily, it is good to stop for real Sicilian gelato or ice cream.

The Rough Guide to Sicily, which I am using on this holiday, says “eating a genuine Sicilian ice cream is one of the world’s most voluptuous gastronomic experiences.”

But where does Sicilian ice cream come from, and what are its origins? These have been among the most hotly debated topics in Sicily for generations.

Some say gelato was created by the Greeks or the Romans. It is said that in classical time, Greek or Roman foot runners brought snow from Mount Etna to Taormina or Catania to be flavoured with nuts or berries and honey. It was a treat reserved for the ruling classes.

Others say the invading Arabs were the first to invent it, having brought to Sicily their skills in making sherbet.

By the 18th century, Sicilian gelato were so popular that a high proportion of the revenue of the Bishop of Catania is said to have come from selling the snow of Mount Etna.

Whatever its origins, true Sicilian ice cream tastes so different so much better than all other ice creams.

Sicilian gelato usually contains less cream and less emulsifier than other ice creams, it is not mixed at high speeds, and it is cooled differently. All this helps to create it softer texture.

Alongside gelato on the street stalls is Granita/ This is made from fruit and sugar mixed with water and slowly mixed as it is frozen, giving the texture of flaked or finely crushed ice.

And, as they say, it’s all finger-licken’ good. 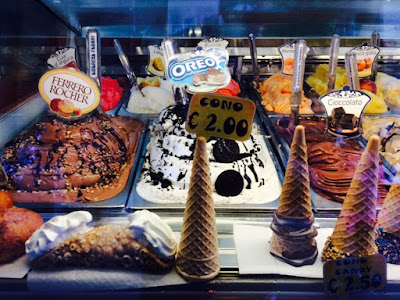 Sicilian ice cream ... not to be dismissed as a mere summer treat (Photograph: Patrick Comerford, 2015)

Email ThisBlogThis!Share to TwitterShare to FacebookShare to Pinterest
Labels: Eating Out, Italy 2015, Sicily

How a visit to Sicily inspired
Yeats in designing Irish coins 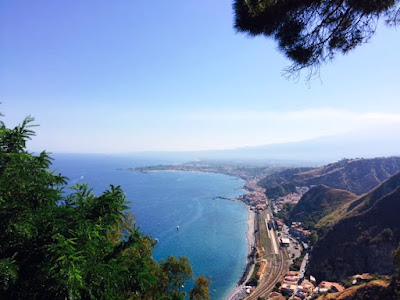 Looking down the Bay of Naxos from Taormina … WB Yeats visited Sicily with Ezra Pound in the mid-1920s (Photograph: Patrick Comerford, 2015)

I am spending most of today in Siracusa, once one of the most important cultural and political cities in the classical Greek world. This was the home of Archimedes, here Aeschylus saw the last of his plays, and here Plato had lived and taught until he was forced to flee.

Many English-speaking writers have found inspiration in Sicily over the past century or two. Irish writers who visited Sicily in the 19th century included Oscar Wilde. George Bernard Shaw praised Luigi Pirandello’s Six Characters in Search of an Author as “the theatrical masterpiece of the [20th] century.” More recently, the Greek mythology of Sicily is also reflected the poem ‘Sicily’ by Desmond Egan.

So I was not surprised in Sicily this week to learn that WB Yeats had been inspired by a visit to Sicily almost a century ago.

While most of the celebrations of the 150th anniversary of the birth of Yeats are focussing on his poetry, it seems to be largely forgotten that he was also responsible for designing the first coins of the Irish Free State. The inspiration for those designs came during a visit to Sicily in the mid-1920s with the poet Ezra Pound.

Pound’s verse is filled with echoes and images of Selinunte and Taormina, the classical mythology of Sicily, and the art of Monreale and of Syracuse. Pound dreamed he would live one day in Taormina. Although he never fulfilled this dream, he spent 34 years of his life in Italy, most of it in Rapallo, and he died in Venice in 1972.

Yeats visited Sicily with Ezra Pound in the 1920s, under the guidance of the Sicilian poet, Lucio Piccolo.

Yeats had already received the Nobel Prize for Literature and was a Senator in the Irish Free State when he arrived in Sicily in January 1925. He was recovering from a long illness and his doctor prescribed absolute rest under the healthy sun of Sicily. He also wanted to also admire the classical glories and the beauty of the island.

Ezra Pound described their visits to Agrigento and Cefalù, to see the “mosaics and remains of ancient walls upon the hill.” The two poets also visited Syracuse with the archaeologist Paolo Orsi, director of the museum, which is famous for its collection of Greek coins. This visit struck the two poets and in a strange but unforeseen way it also influenced the design of the future coinage of Ireland.

Yeats was entrusted with the task of designing the new coins of the Irish Free State. Yeats believed the Greek or Sicilian coins Yeats saw in Syracuse were some of the most beautiful from Greek civilisation.

After Yeats returned to Ireland from Sicily, the Coinage Act was passed in 1926 providing for silver, nickel and bronze coins. Yeats chaired the committee responsible for designing the new coins.

The committee members were given three binding conditions: a harp should be shown on one side of most if not all of the coins; the inscriptions should be in Irish only; and the designs should include no effigies of modern persons.

Yeats sought advice from Lady Gregory, Sir William Orpen and Oliver St John Gogarty. Suggestions from the public included round towers, wolfhounds, shamrocks and even the Treaty Stone of Limerick. The Royal Society of Antiquaries of Ireland advised the committee to “avoid patriotic emblems altogether, for even the shamrock emblem was not a hundred years old.”

When the moment came for presenting designs for the new coins in the Irish Free State, Yeats insisted all those involved in the tenders should base their designs on these Greek-Sicilian coins. He declared:

“As the most famous and beautiful coins are the coins of the Greek Colonies, especially of those in Sicily, we decided to send photographs of some of these, and one coin of Carthage, to our selected artists, and to ask them, as far as possible, to take them as a model. But the Greek coins have two advantages that ours could not have, one side need not balance the other, and the other could be stamped in high relief, whereas ours must pitch and spin to please the gambler, and pack into rolls to please the banker.”

The committee agreed on a horse for the half crown (2s 6d). The horse had been used on Greek and Carthaginian coins.

A salmon was to appear on the Florin (2s), and a bull on the Shilling (1s). The bull appeared on many classical Greek coins, and the report included photographs of a coin with a bull from Thurium (400-350 BC) or Thurii (Θούριοι), an ancient Greek colony in southern Italy.

The sixpence (6d) would have a greyhound, and the threepence (3d) a hare, which also appeared on ancient Greek coins. The penny (1d) was to have a hen, possibly with chickens, the halfpenny (½d) a pig, and the farthing (¼d) a woodcock.

The committee nominated Metcalfe “to execute the designs for the whole series of coins.” His designs were considered “incomparably superior” to the other designs, displaying “outstanding excellence” and promising coins “of unusual interest and beauty.” Some of Metcalfe’s designs were revised three or four times, but the Minister for Finance, Ernest Blythe, described them as “more interesting and beautiful” than any other coins in the world.

However, critics of the new coins argued that a Christian nation should acknowledge God on its coinage. They saw the new coins as a deliberate rejection of God that reflected badly on the nation.

Some critics also objected that the coins presented Ireland as a farmyard where the people only raised livestock, and that a pig on the ha’penny would perpetuate the myths about a “pig in the parlour.”

One critic, identified by the Irish Independent as a priest, declared: “If these pagan symbols once get a hold, then is the thin edge of the wedge of Freemasonry sunk into the very life of our Catholicity, for the sole object of having these pagan symbols instead of religious emblems on our coins is to wipe out all traces of religion from our minds, to forget the ‘land of saints,’ and beget a land of devil-worshippers, where evil may reign supreme.”

Those who took offence at the designs wanted symbols of Irish ideals and the grandeur of Irish civilisation. Maude Gonne MacBride, once the attention of Yeats and amorous affections, was scathing when she said “the coins were entirely suitable for the Free State: designed by an Englishman, minted in England, representative of English values, paid for by the Irish people.”

Later, the Sicilian coins continued to inspire Yeats in his poetry. In ‘Parnell’s Funeral,’ written in April 1933, he refers to:

A pierced boy, image of a star laid low.
That woman, the Great Mother imaging,
Cut out his heart. Some master of design
Stamped boy and tree upon Sicilian coin.

The Irish coins, which continued in circulation until the introduction of the Euro, were a testimony for decades to the inspiration of Greek-Sicilian civilisation on one Irish poet. 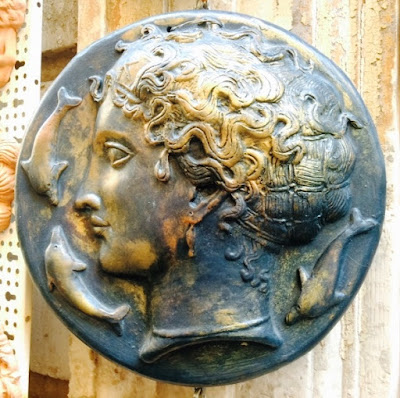 A tourist shop in Syracuse displays a replica of one of the Greek coins that inspired WB Yeats (Photograph: Patrick Comerford, 2015)