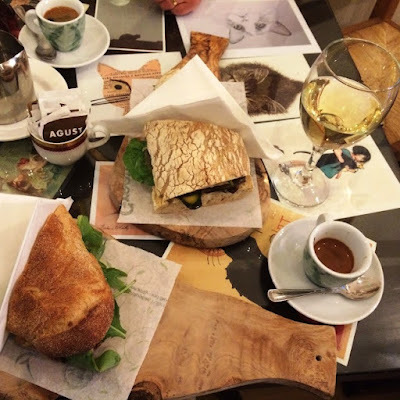 At times, Bray in Co Wicklow can take you back to Italy. There are buses to Palermo, street names like Florence, and wonderful Italian cafés, wine bars, pizzeria, gelatarias or ice cream parlours and restaurants.

My favourites include Carpe Diem, but I notice too that Pizzas ’n’ Cream on Albert Walk claims to be “the oldest pizzeria in Ireland” – it was established in 1986.

I was passing by Pizzas ’n’ Cream on Albert Walk, when I noticed for the first time the neighbouring Caffé Letterario Gatta Nera – the Black Cat Literary Café.

And in the hour that followed, I was taken back to last week’s pleasures in Sicily, less than 24 hours after leaving Catania and a week’s holidat in Guiardini Naxos and Taormina.

Here again I found a Sicilian Grillo, produced by co-operatives in Sicily set up on vineyards confiscated from the Mafia.

It is only a day since I was writing about the Libera Terra programme, usually producing vino biologico or organic wine, made from grapes cultivated on land confiscated from the Mafia.

Many vineyards in Sicily were left untended and uncultivated when Mafia owners were jailed, and many of the vines died from neglect and needed replanting. When the projects began, there were inevitable acts of intimidation, including arson fires. The co-operatives were not discouraged and did not lose hope.

The Libera Terra labels now include organic wines, pastas, legumes, olive oil, honey jams and limoncello – with a variety on sale this afternoon in this delightful new literary café in Bray. 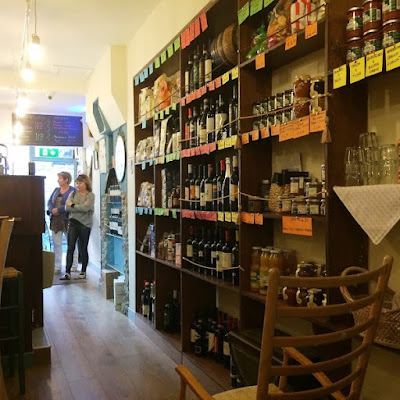 The place only opened a few weeks ago [26 June 2015], but already there is mature confidence about the place, and a feeling that it already has its own regular customers.

There is a wall lined with books, not for decoration but reading, another lined with old Italian opera LP covers, and the shelves are lined with authentic Italian wines and foods, most seemingly from small-scale producers and co-operatives. We heard of live music evenings, home-made organic Sicilian lemon marmalade tart, and ideas for art and entertainment.

We had two large sandwiches, two double espressos, and I also had that glass of Grillo from Sicily. 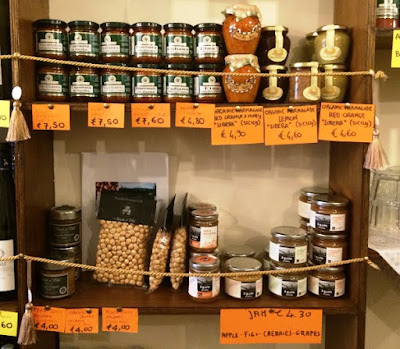 Later, we went for a walk along the north end of the promenade, around the harbour, where the tide was out and the water was sparkling in the evening lights, by the sailing club, and down onto the small beach where the River Dargle flows into the harbour and where the friendly swans were expecting to be fed. 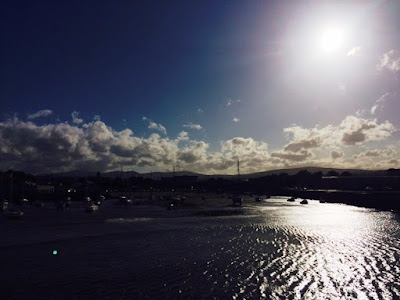