In search of Archbishop
Michael Ramsey’s family
connections with Limerick 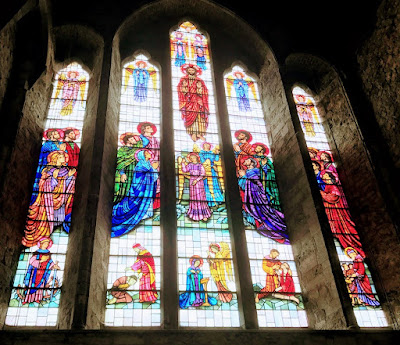 Saint Mary’s Cathedral, Limerick, has a wealth of stained–glass, mostly dating from the 19th century.

The Ascension Window was dedicated on 28 February 1961 by the then Archbishop of York, Michael Ramey, who was about to become Archbishop of Canterbury.

The window was presented in memory of Horace Stafford-O’Brien (1842-1929) and his wife Eleanor Elizabeth (née Holmes), and was donated by their son, Major Egerton Augustus Stafford-O’Brien (1872-1963), who lived just outside Limerick at Cratloe, Co Clare.

The Ascension Window is the most modern of all the stained-glass windows in the cathedral. It immediately attracts attention because of its size and because of the amount of white antique glass in its execution, allowing light to filter into the Jebb Chapel below.

The glass in this window is known technically as antique glass. It is of English manufacture – this glass is not made in Ireland – and is made specifically for stained glass work alone. Unlike sheet glass, it is not made mechanically. This window contains many thousands of pieces that have been leaded together by hand.

The main image in the window depicts the Ascension as narrated in the Acts of the Apostles. The lower images depict, from left to right, Saint Catherine of Sinai (lower left) with her wheel; the Parable of the Prodigal Son; the Annunciation; the Parable of the Good Samaritan; and Saint Nicholas (lower right), shown as Santa Claus, distributing gifts to children.

The figure of the Ascending Christ is in pale gold and ruby. The Apostles, the Virgin Mary and Saint Mary Magdalene are depicted in a rich array of blues, reds and greens, preserving a rhythmic balance of tone and colour that is consistent with the best traditions of stained glass. A neutral tone of green binds the composition of figures in an harmonious whole and gives a sense of stability to the grouping of the figures.

But who was Horace Stafford-O’Brien?

Who was Egerton Augustus Stafford-O’Brien?

And why did Archbishop Michael Ramsey come to Limerick over half a century ago to dedicate this window?

Michael Ramsey (1904-1988) remains one of the most influential Archbishops of Canterbury. His short book The Christian Priest Today remains a classic on priestly ministry, and over the years I have given copies of this book to many ordinands and students.

He was born in Cambridge and his parents were Arthur Stanley Ramsey (1867-1954) and Mary Agnes (1875-1927) née Wilson. In Cambridge, he wis father was a Congregationalist and a mathematician and his mother was a socialist and a suffragette. As a child, he attended Emmanuel Church on Trumpinton Street, opposite Corpus Christi College, and went to school at King’s College School, Cambridge, and Repton School, before going on to Magdalene College, Cambridge, where his father was the President and where the present master is one of his successors, Archbishop Rowan Williams.

At Cambridge, he was influenced strongly by Edwyn Clement Hoskyns, the Anglo-Catholic dean of Corpus Christi College, and on the advice of Eric Milner-White, the Chaplain of King’s College, Cambridge, he trained for ordination at Cuddesdon, where he became friends with Austin Farrer and was introduced to Orthodox Christianity. In the late 1930s, he was briefly Vicar of Saint Bene’t’s Church, which i attend regularly when I am in Cambridge, and he returned to Cambridge later as Regius Professor of Divinity and a Fellow of Magdalene College in 1950.

When Archbishop Ramsey arrived in Limerick to dedicate the Ascension Window, it was a family event, but he was astonished to find so many Anglicans in Ireland, exclaiming: ‘The Church of Ireland boils up in the most unexpected places, doesn’t it?’ He had lunch with President Eamon de Valera, and was delighted to find that Dev was educated on his father’s mathematical textbooks. 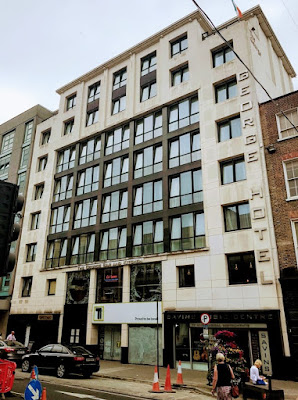 During his visit to Limerick, Archbishop Ramsey was entertained at the Royal George Hotel on O’Connell Street, which was once visited by Queen Victoria and which was demolished in 1973 and rebuilt.

Later, Robert Wyse Jackson, who was Bishop of Limerick at the time, recalled that the Royal George Hotel, ‘in its original form … fitted handsomely into the Georgian façade of O’Connell Street. The last function before it was demolished and rebuilt was one which I organised for the Archbishop of Canterbury, Dr Ramsey, when he came to Limerick to dedicate a window in St Mary’s Cathedral to the memory of his kinsman, Major Stafford-O’Brien of Cratloe.’

But how was Archbishop Ramsey related to the O’Brien family, and did he have Irish family connections?

Archbishop Ramsey had a little-known Irish background. His grandfather, the Revd Adam Averell Ramsey, was born in Downpatrick, Co Down, and was trained as a Congregationalist minister in Belfast, and later ministered in Dewsbury, Yorkshire, and in a Primitive Methodist Church in London. He returned to Ireland on at least one occasion to speak at the opening of the Protestant Hall and County and City of Cork Assembly Rooms in 1861.

But this does not explain the Irish family links that brought Michael Ramsey to Limerick over half a century ago. I had to look for clues elsewhere.

In 1942, the future archbishop married Joan Alice Chetwode Hamilton (1909-1995), and it was in her family story that I found the Ramseys’ family links with Limerick.

Joan Ramsey was a daughter of Lieutenant-Colonel Francis Alexander Chetwode Hamilton (1879-1956), and his wife, Ouida Mary Tryon (1875-1973). Colonel Hamilton had fought in the World War I and was decorated with the Military Cross. In 1908, he married Ouida Mary Tryon.

Joan Ramsey’s uncle, Eric Hamilton (1890-1962), was Suffragan Bishop of Shrewsbury (1940-1944) in the Diocese of Lichfield and later Dean of Windsor (1945-1962). Joan was a social worker, and she met Michael Ramsey while she was the secretary and driver for Leslie Owen, Bishop of Jarrow, who had been Michael Ramsey’s former warden at Lincoln.

As I searched through this family tree, I was still not finding any Irish ancestors. But then I came across Ouida Mary Hamilton’s younger sister, Violet Alice Grace Tryon. On 18 September 1912, she married Major Egerton Augustus Stafford-O’Brien.

So, it appears, the Ascension Window was presented to Saint Mary’s Cathedral, Limerick, by Joan Ramsey’s uncle, Major Egerton Stafford-O’Brien, the husband of her favourite aunt, in memory of her aunt’s father-in-law, Horace Stafford O’Brien (1842-1929).

Horace’s uncle, Augustus Stafford O’Brien-Stafford (1811-1857), was perhaps the best-known member of the family. He was the MP for Northamptonshire North (1841-1857) until his early death in Dublin in 1857, and was Secretary to the Admiralty in Lord Derby’s government in 1852. He assumed the additional name of Stafford by royal licence in 1847 to distinguish himself from his kinsman William Smith O’Brien.

During the Crimean War, Augustus O’Brien-Stafford went to Scutari in 1857 to assist Florence Nightingale’s work with the sick and wounded. It is said Florence Nightingale paid for the large stained-glass window in his memory in Saint Mary’s Cathedral.

Until 1990, Joan Ramsey’s first cousin, Robert (‘Robin’) Guy Stafford-O’Brien (1915-1991), the only son of Egerton and Violet, lived at Cratloe Woods. When he died on 29 April 1991, he was buried in a simple grave in the grounds of Saint Mary’s Cathedral, Limerick. His cousins, the Brickenden family, moved to Cratloe Woods from Co Wicklow, and the house is open to the public during the summer months. 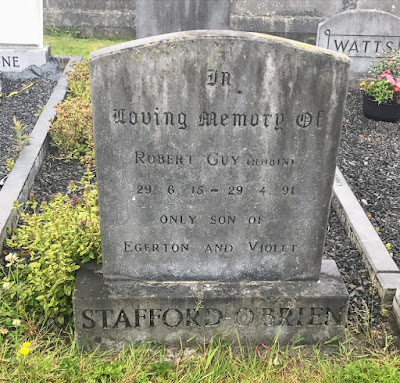