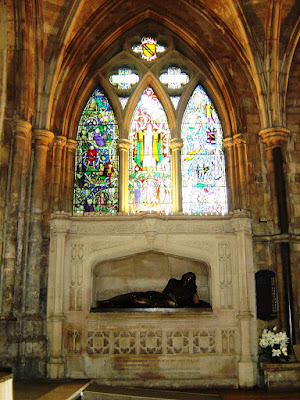 I am in London today, at a meeting of the trustees of the Anglican mission agency Us, previously USPG (the United Society for the Propagation of the Gospel.

On my way to the Us offices at Harling House in Great Suffolk Street, I walked from Liverpool Street Station to Saint Paul’s Cathedral, and walked across the the London Millennium Footbridge over the Thames to the Globe Theatre on the Southwark side of the river, just 10 minutes walk from here.

For the past week, the 400th anniversary of the death of William Shakespeare has been celebrated throughout this part of London, and the offices in Great Suffolk Street are just a short walk from Southwark Cathedral, where Shakespeare is commemorated by a window and a statue in the South Aisle.

Every year a birthday celebration is held in Southwark Cathedral in honour of England’s greatest playwright. Last Saturday [23 April], the special Shakespeare service in Southwark Cathedral blended liturgical worship, music and performance. The celebration drew on extracts of four plays – Pericles, Cymbeline, The Winter’s Tale and The Tempest – all currently playing in the Sam Wanamaker Playhouse at Shakespeare’s Globe.

It was a fitting celebration of Shakespeare’s life and legacy in his workplace parish. Although he was never a regular worshipper in London, many members of his acting company were on the parish register of Saint Saviour’s Church.

The famous first folio of Shakespeare’s plays, produced after his death by two members of his acting company – John Hemings and Henry Cordell – lists all the company’s members. Over half (but not William Shakespeare) also appear on the parish register of Saint Saviour’s.

The window, showing characters from some of Shakespeare’s plays, was designed by Christopher Webb to replace one that was destroyed during World War II. The window was unveiled in 1954 by Dame Sybil Thorndike, who made her stage debut half a century earlier in 1904 in a regional production of The Merry Wives of Windsor and went on to perform in hundreds off Shakespearean productions.

Beneath the window is a recumbent alabaster figure of Shakespeare, carved by Henry McCarthy in 1912. The Bard is show resting and reading outside the Globe Theatre. The background depicts 17th century Southwark in relief, including the Globe Theatre, Winchester Palace and the tower of Saint Saviour’s.

Shakespeare’s brother Edmund was buried in Saint Saviour’s in 1607, and although the position of Edmund’s grave is not known today, he is commemorated by an inscribed stone in the paving of the Choir.

A Kempe window in the cathedral commemorates Samuel Johnson (1709-1784), the Lichfield-born author, lexicographer, critic and conversationalist. He was a friend of the Thrale family who were local brewers, and often stayed with them. His friends James Boswell and David Garrick were responsible for reviving English national interest in Shakespeare as a poet and playwright.

Remembering ‘Dungarvan in
the rain’ on Poetry Day Ireland 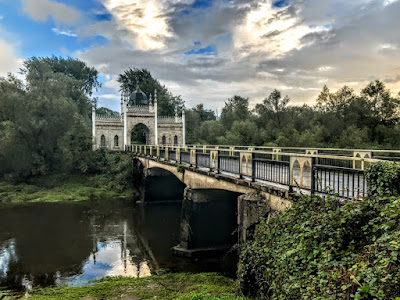 ‘Gone —  the overgrown demesne’ … the gate to Dromana House, between Cappoquin and Dungarvan (Photograph: Patrick Comerford)

Poetry Ireland is promoting today Poetry Day Ireland [28 April 2016], and with this year’s theme of Revolution, Poetry Ireland is inviting everyone to rebel, revolutionise and organise to make poetry inescapable and irrepressible for a day.

The theme of Revolution includes artistic, political, social or personal revolution. Poetry Ireland wants to bring that aspect of the written and spoken word to the forefront in every school, venue, café and street corner in Ireland.

This morning, I have chosen a poem by John Betjeman, the British poet laureate who was once the British attaché in Dublin. He lived in Ireland from 1941 to 1943, and could never be described as a revolutionary poet. But his near-murder at the hands of the IRA makes him worth remembering this morning.

Betjeman, who was born 110 years ago in 1906, ten years before the Easter Rising, had a long if oft-hidden association with a family who lived near Cappoquin in Co Waterford. His poem, ‘The Irish Unionist’s Farewell to Greta Hellstrom in 1922,’ is also revolutionary in the way Betjeman challenges many of the accepted mores in Ireland in the 1940s. It opens with the lines:

Golden haired and golden hearted
I would ever have you be,
As you were when last we parted
Smiling slow and sad to me.

The poem is set in west Co Waterford, with each stanza closing with the line “Dungarvan in the rain.” For me, its descriptions too of Grattan Square in Dungarvan and the Comeragh Mountains, recall my childhood days on my grandmother’s farm near Cappoquin in west Waterford.

The woman in the poem has since been identified as Emily Sears, who later married Ion Villiers-Stuarts of Dromana House, near Cappoquin. She and Betjeman met in the Yellow House in Helvick Head, a fishing lodge then owned by the Villiers-Stuart family, and he visited her both in Galway and in Co Waterford.

The final lines of the poem show the poet’s respect and his final acceptance of Emily’s decision to remain friends and never to be lovers:

You were right to keep us parted:
Bound and parted we remain,
Aching, if unbroken hearted—
Oh! Dungarvan in the rain.

Meanwhile, it is romantically curious that all that remains of the Villiers-Stuart family home in Dromana near Cappoquin is the “Hindu Gothic” gate lodge at the end of a bridge over the River Finnisk, close to where it meets the River Blackwater, outside Villierstown.

The gate lodge was designed by Martin Day in 1849 and built in 1851. Day is said to have been inspired by the Brighton Pavilion, built for the Prince Regent and designed by John Nash. The gate lodge was erected by Henry Villiers-Stuart as a wedding gift for two newly-weds who had spent their honeymoon in Brighton.

The design is a bizarre combination of styles, from flamboyant gothic with ogee-style arched windows, to Brighton pavilion oriental, complete with an onion dome.

‘The Irish Unionist’s Farewell to Greta Hellstrom in 1922,’ by John Betjeman

Golden haired and golden hearted
I would ever have you be,
As you were when last we parted
Smiling slow and sad at me.
Oh! the fighting down of passion!
Oh! the century-seeming pain —
Parting in this off-hand fashion
In Dungarvan in the rain.

Slanting eyes of blue, unweeping
Stands my Swedish beauty where
Gusts of Irish rain are sweeping
Round the statue in the square;
Corner boys against the walling
Watch us furtively in vain,
And the Angelus is calling
Through Dungarvan in the rain.

Gales along the Commeragh Mountains,
Beating sleet on creaking signs,
Iron gutters turned to fountains,
And the windscreen laced with lines,
And the evening getting later,
And the ache —  increased again,
As the distance grows the greater
From Dungarvan in the rain.

There is no one now to wonder
What eccentric sits in state
While the beech trees rock and thunder
Round his gate-lodge and his gate.
Gone —  the ornamental plaster,
Gone —  the overgrown demesne
And the car goes fast, and faster,
From Dungarvan in the rain.

Had I kissed and drawn you to me
Had you yielded warm for cold,
What a power had pounded through me
As I stroked your streaming gold!
You were right to keep us parted:
Bound and parted we remain,
Aching, if unbroken hearted —
Oh! Dungarvan in the rain!