Inside the former Jesuit Church of the Sacred Heart on the Crescent in Limerick (Photograph: Patrick Comerford, 2017; click on images for full-screen resolution)

In the past week, reports throughout the media have told how the Mass is no longer being celebrated on Tuesdays in churches throughout the Roman Catholic Diocese of Limerick. As I walk through Limerick, from one bus and another, I have become aware of recent major changes in the church landscape and the presence of religious communities in the city.

The Jesuits, Franciscans and Dominicans have left their churches, which were once key ecclesiastical landmarks in Limerick. The Jesuits left the Crescent in 2006, the Franciscans left their church on Henry Street in 2008, and then the Dominicans celebrated their last Mass in Saint Saviour’s Church in Glentworth Street last July, bringing an end to a Dominican presence that had been unbroken for almost 800 years, dating back to 1224.

According to the local historian Maurice Lenihan, the Jesuits first came to Limerick in 1560 when a Father Woulfe returned to the city of his birth, as Papal Nuncio ‘to the most illustrious princes and to the whole kingdom of Ireland.’

The Jesuits opened a classics school and an oratory in Limerick after 1575. The Society of Jesus also had a chapel in Castle Lane from 1642. Near the junction of the Crescent and Newenham Street, a surviving stone from this chapel is inscribed with the date 1634.

The Jesuits fled the city after the Siege of Limerick in 1691, but returned in 1728. Later they had a house in Jail Lane in 1766. The school was forced to close in 1773, but Bishop Ryan invited the Jesuits to return to Limerick in 1859 to supervise the new Saint Munchin’s College.

They moved into 1 Hartstonge Street and opened a school and oratory there. In 1862, the college moved to Mungret to make way for a new church at the Crescent.

I stopped on a recent morning to visit the former Jesuit Church of the Sacred Heart.

The Jesuits moved into the houses on this site in 1862 and started building the church in 1864. It was begun while Father Thomas Kelly was the Rector. The church was dedicated in 1869, although still not completed in 1897.

The church was designed by the architect William Edward Corbett and supervised by Charles Geoghegan on the site of Crescent House. It breaks the uniformity of The Crescent, giving it a focus and adding interest to the Georgian fabric.

The architect and engineer Charles Geoghegan (1820-1908) was born and educated in Dublin. He trained as an engineer before going to London, where he trained as an architect. There he set up in practice around 1849, but returned to Dublin in 1851, and practised for over 40 years.

He was employed by the Royal Bank throughout his career and was architect to the Industrial Tenements Co. In 1869, he invented and patented a self-acting regulator of high-pressure water supply. The former Jesuit Church on the Crescent in Limerick was designed by the architect William Edward Corbett and supervised by Charles Geoghegan (Photograph: Patrick Comerford, 2017)

The Crescent Church is a terraced, cruciform-plan, three-bay three-storey pedimented brick church, with a seven-sided apse at the liturgical east end. The church was built largely to the rear of two terraced late Georgian houses that were replaced or incorporated into the building, although the northern bay of one house survives.

There are elaborate cast foliate terracotta panels to the pediment with a central medallion bearing a plaque with the Jesuit cipher: IHS. There is a carved limestone pediment with a dentil enriched moulded red brick cornice, and red-brick acroteria, each surmounted by a Portland stone figurative sculpture.

The hipped natural slated roof has black ridge tiles and two roof vents. There are cast-iron rainwater goods. The sheer red brick walls to the nave, apse and north transept are laid in Flemish bond.

The façade brickwork is laid in English garden wall bond. The lettering attached to the brick frieze reads Cordi Jesu Sacratissimo, ‘(Dedicated to) the Most Sacred Heart of Jesus.’ The church is in Saint Joseph’s Parish. It was originally planned to dedicate the church to Saint Aloysius, but when it was dedicated in 1869 it was called the Church of the Sacred Heart.

A double-height round-arched window opening fills the central bay with a moulded brick archivolt, a scrolled limestone keystone, imposts and pilaster bases with a timber fixed pane window and a spoked fanlight.

The flanking bays have square-headed window openings at mezzanine and first-floor level with lugged and kneed moulded brick architraves, on limestone sill courses, each glazed with timber casement windows. There is an arcade of round-arched door openings with surrounds similar to the central window, and these occupy each bay at ground floor level, having double-leaf timber-panelled doors with some glazing and an overlight, opening onto a granite platform and one step.

There are square-headed window openings with leaded lights and limestone sills to the other elevations.

Inside, the classical treated interior of the church has giant order rendered Corinthian pilasters articulating four bays to each side, supporting a full entablature with modillion cornice, each side having aediculated clerestorey windows and a blind arcade to the ground floor level.

The three-bay transepts and a semi-circular apse are articulated by giant order marble-faced Corinthian pilasters supporting a full entablature with modillion cornice. There were two semi-circular side altars with marble facing. The ceiling was panelled, enriched with floriated ornaments in stucco work. 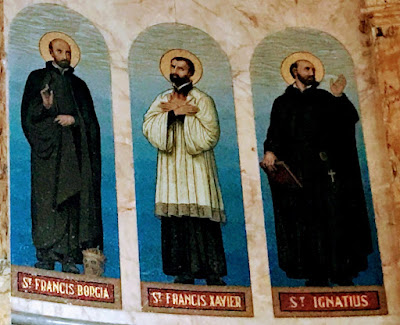 The high altar was designed by William Corbett and was made of 22 types of precious marble. There are nine mosaics above the high altar. The central mosaic is of the Sacred Heart ascending in the presence of Saint Margaret Mary Alacoque and Blessed Claude la Colombiere. It is surrounded (from left to right) by depictions of Saint Francis Jerome, Saint Francis Borgia, Saint Francis Xavier, Saint Ignatius Loyola, Saint Stanislaus, Saint Aloysius, Saint John Berchmans and Saint Francis Regis.

The apse originally had elaborate marble altar furniture, altar rail and mosaics. The high altar was made in Rome in 1876. A Sacred Heart shrine was erected in 1920. The marble altar rails were made in 1927. The sanctuary mosaic was worked by Italian craftsmen in 1939.

The building project was slow, and was delayed by a series of problems. In an arbitration case following the failure of the roof of the new church in 1867, Charles Lanyon and John McCurdy were the arbitrators and Sir John Benson was the umpire.

The building of the church utilised the natural focus of the crescent form to give the church the prominence the Jesuits expected. The very fine classical interior, with a wealth of quality materials and craftsmanship, adds to the overall architectural importance of this building. 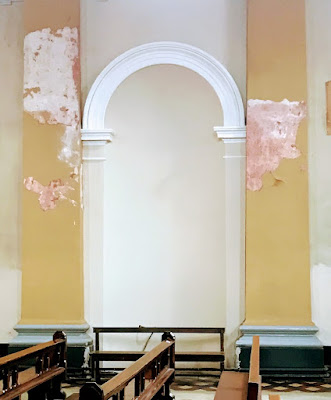 The church remained empty for six years after the Jesuits left in 2006 (Photograph: Patrick Comerford, 2017)

When the Jesuits left the church in 2006, it remained empty for six years after a developer had bought the building with the intention of turning it into a leisure centre with a swimming pool, but then abandoned the project.

Recently, a group of young priests raised funds to buy the Church of the Sacred Heart Crescent in Limerick. In 2012, the Institute of Christ the King Sovereign Priest bought the vacant church and residence that were in danger of falling into ruin, in the hope of bringing both back to life. Reports said they paid about €4 million for buildings.

The Institute of Christ the King, which has been present in the Diocese of Limerick since 2009, was founded in 1990 and has over 60 members. It is dedicated to the revival of the Latin Mass and says it intends to restore the church and make it a place for worship and community life once more. 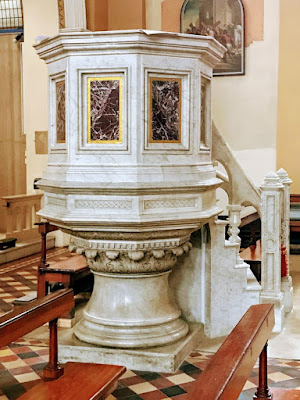 When they moved in, rain was leaking into the church and the residence, the heating was broken and the buildings were empty. The main altar and tabernacle, all statues, the stations of the cross and the pews had been sold or removed.

Recently they acquired a marble pulpit and statues that had once stood in the Franciscan Church in Henry Street, Limerick, which was designed by the same architect.

Meanwhile, the Jesuits maintain a presence in Limerick through their role at the Crescent Comprehensive school and they have plans for a new spiritual centre. 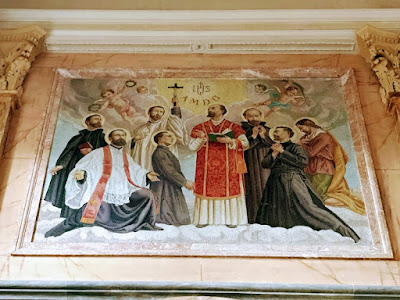 The Jesuits maintain their mission and presence in Limerick through their role at the Crescent Comprehensive school centre(Photograph: Patrick Comerford, 2017)