Singing the joys of Easter 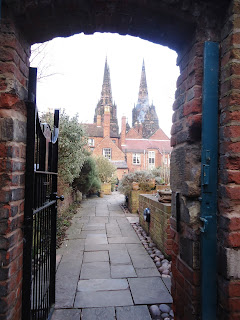 Looking from Darwin House through the herb garden at Vicar's Close, with Lichfield Cathedral in the background ... Paul Spicer gave the name Darwin Close to one of our Easter hymns at the Sung Eucharist this evening (Photograph: Patrick Comerford, 2013)

I am presiding at the Community Eucharist: (Holy Communion 2) this evening [3 April 2013], when the visiting preacher is the Very Revd Raymond Ferguson, Dean of Kilmore and All-Ireland Chaplain of the Mothers’ Union.

On the first day of the week … the women who had accompanied Jesus came to the tomb (Luke 24: 1) – a window in Lichfield Cathedral (Photograph: Patrick Comerford, 2013)

Our processional hymn, ‘Jesus Christ is risen today, alleluia!’ (Hymn 271), is derived from an Easter carol, Surrexit Christus hodie, dating from the 14th century. Instead of a Psalm, we are singing the Easter Anthems to a setting by Alison Cadden. This is a traditional canticle based on New Testament passages (I Corinthians 5: 7-8; Romans 6: 9-11; I Corinthians 15: 20-22).

The Gradual, ‘O sons and daughters, let us sing!’ (Hymn 279), is by Jean Tisserand, a Franciscan friar who died in Paris in 1494, and the tune, O filii et filiae, is probably adapted from a popular French folk melody.

Our Offertory hymn, ‘The Day of Resurrection,’ (Hymn 283) was written in the early eighth century by Saint John of Damascus as Αναστάσεως ημέρα, an Ode for the Canon for Easter Day. It was translated in to English by John Mason Neale (11818-1866), but the tune Elliacombe is a melody from Würtemberg Gesanbuch (1784).

The Recessional Hymn, ‘You shall go out with joy,’, is Easter Hymn 4 from the Easter Oratorio by Bishop Tom Wright and Paul Spicer, and is based on Isaiah 55: 12 ff.

At the time of writing, the two men were neighbours in the Cathedral Close in Lichfield – Tom Wright was then the Dean of Lichfield and Paul Spicer was the Artistic Director of the Lichfield International Arts Festival. They wrote the Easter Oratorio in 1998 to mark the 1,300th anniversary of the founding of Lichfield Cathedral, and it received its première at the Lichfield Festival on 15 July 2000. The celebration that year of the 250th anniversary of Bach’s death also left its mark on the score.

Paul Spicer called this tune ‘Darwin Close’ after the enclosed close behind his house between Lichfield Cathedral and Erasmus Darwin House, with its herb garden planted by Charles Darwin’s grandfather.

Early on the first day of the week, while it was still dark, Mary Magdalene came to the tomb … (John 20: 1) … Mary Magdalene with spice, from the West Front of Lichfield Cathedral (Photograph: Patrick Comerford (2013)

Canon Patrick Comerford is Lecturer in Anglicanism and Liturgy, the Church of Ireland Theological Institute, and an Adjunct Assistant Professor, Trinity College Dublin