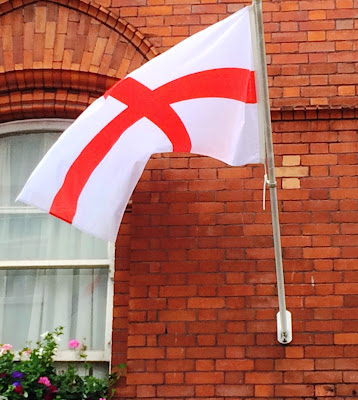 The English flag flying outside a pub in Dublin this week ... who are Irish football fans going to cheer for over the next month? (Photograph: Patrick Comerford, 2014)

The whole world is going football mad. Not just the 32 countries with teams in the World Cup .... but most countries in the world, apart from, perhaps, India and China.

There is little for Irish fans to get upset about ... after all, as Ireland has not qualified, there can be no repeat of Roy Keane’s Saipan walkout in Japan in May 2002.

But who are Irish fans going to support this summer, from the first match tomorrow [Thursday 12 June 2014] until the final on a month later on 13 July?

I remember feeling a little bit of an oddity in 1966. I was 14 and staying at an Irish college in Ballinskelligs, Co Kerry. With two of my cousins, we managed to convince the nuns in the Presentation Convent that it would be an act of Christian hospitality to allow three teenage boys in to watch the final.

One my cousins convinced one of the nuns he knew the Presentation nuns in Millstreet, Co Cork, my mother’s home village. The rest of that Saturday afternoon – 30 July 1966 – was uninterrupted, even as the game went into extra time, apart from kind offers of tea and sandwiches.

Had the Irish teachers in the Kerry Gaeltacht realised not only that were we speaking English that day, but we were watching what they called a “foreign game” they would have been shocked. A new nationalism was emerging in Ireland in the wake of the commemorations of the 50th anniversary of the 1916 Rising, and so I was a slight oddity, not only for having a hint of an English accent but also for supporting England, even if I had cheered on the winning team that afternoon.

Even now, almost half a century later, I am surprised how many Irish people are reluctant to cheer for England. This is our nearest neighbour, our biggest trading partner, we speak the same language, watch the same television programmes, are obsessed with each other’s politics, music and comedians, and share families in both countries. Yet many Irish people from tomorrow on will cheer any side but England. 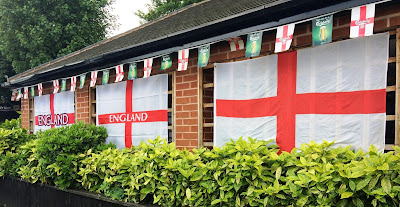 The English flag ... and variations ... outside a pub in Lichfield last weekend (Photograph: Patrick Comerford, 2014)

On the other hand, it is a sign of the times that the English flag – a white flag with the red cross of Saint George – is flying freely and being feted along all the other national flags inside and outside pubs throughout Ireland.

For many years, that flag was hijacked by the English Defence League, the British National Party, UKIP, and far-right racists, or by England football fans looking for trouble abroad. In the 1970s, the National Front recruited on the terraces, which were marked by widespread racism and violence.

The Flag of Saint George first became an acceptable symbol for English fans when Euro 1996 was held in England. England was drawn with Scotland in the group stage, and the label “Britain” was no longer inter-changeable with England ... Wembley was suddenly flooded by the flag of Saint George during the tournament.

It was a trend that continued in Portugal at Euro 2004, when Carlsberg came up with the slogan: “Probably the thirstiest fans in the world.”

By the 2006 World Cup, while I was staying in rural Hertfordshire, the flag of Saint George fluttered with pride throughout the streets and towns of England, and seemingly from every car driven in England.

Germany 2006 was a picture of England abroad, as seen in Spanish and Greek resorts every summer – wave upon wave of young English men drinking in football shirts ... except this time there hardly any fighting or brawls. The English football hooligan was a dying breed rather than an endangered species.

Eight years later, walking around the streets of Lichfield and other towns in Staffordshire last week, it was comforting to realise that football has been rescued from the far-right and football has rescued the flag from its racist and far-right connotations. The cross of Saint George has become the flag of England once again.

While English football fans were once identified with racism, nationalism and violence, the more the flag is flown, the more it becomes a positive symbol.

But has the change come about not because of a new political confidence but because of confident commercialisation by Carlsberg? I find the most cynical development is the way the flag that has been rescued from extremist politics has been hijacked by a brewery – and at that, a Danish-owned brewery. 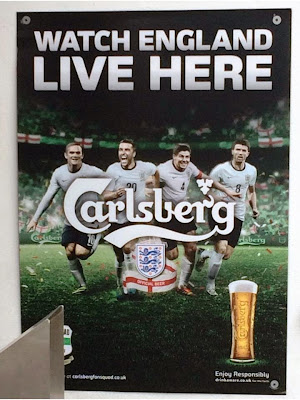 Carlsberg has developed a full package identifying its brand with the English team (Photograph: Patrick Comerford, 2014)

Carlsberg is England’s “official beer” and Carlsberg sponsors the Barclays Premier League as well as the England team, and has given its name to the “Carlsberg Fan Squad.”

Branded flags, cooler bags and T-shirts are backing up in-pub promotions and television advertising. It all looks like a cynical ploy to raise the brand image in England of a Danish beer. Although Carlsberg owns Tetley and Scottish & Newcastle, it is the Carlsberg name that is being promoted and that is scrawled across the English flag.

If Carlsberg did football team talks, surely they should be asking the pub-goers to shout for Denmark? After all, Denmark has a similar flag, even if it is turned inside out. 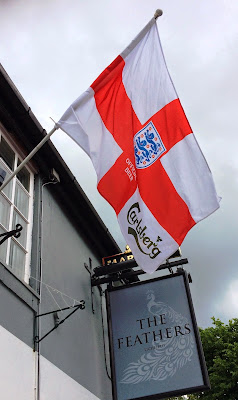 The English flag or the Carslsberg flag ... flying outside the Feathers in Beacon Street, Lichfield, at the weekend (Photograph: Patrick Comerford, 2014)

However, Carlsberg hardly has to worry about doing this in Copenhagen. It is illegal under the Danish penal code to desecrate the flags or national symbols of foreign nations, but legal to burn the Dannebrog, Denmark’s national flag. The legal reasoning is that burning foreign flags interferes with Danish foreign policy, while burning the Dannebrog does not concern foreign countries. It hardly matters though ... after all, Denmark has not qualified for the World Cup.

Meanwhile, the Revd Steve Parish, a former chaplain to Carlsberg-Tetley and a Labour councillor in Warrington, has written to the Guardian pointing out that while Carlsberg is Danish, “at least they’re [in England], which is more than Saint George ever was.”

Still, I have to ask whether Carlsberg is simply stooping to a less-than-subtle marketing plot to get people in England to spend more in the pubs or more on branded sportswear? Or do I really think people in England are going to drink the summer away, lured into the pubs and into a sense of stupor by branded “English pride”?

No matter what result is produced in September, the Scottish referendum must pose questions for English identity. Is England truly a nation-state that has an identity that is rooted in more than beer and racism?

Can being British be separated from being English, or do most English people find it difficult to differentiate between these overlapping cultural identities whether they are taken together or taken apart? Does the England team represent a multicultural patriotic English identity? What is England and what is it to be English?

The English football team appears to be helping to answer some of those questions this week. While English fans draped themselves in the Union Jack in the past, Saint George’s Cross and the flag of England fly everywhere in England as a symbol of English identity.

But has England managed to attract the support of all who live in England, including people with Irish, black or Asian origins? Can they too wrap themselves in the flag of Saint George?

Many black people still feel alienated by the flag of Saint George and associate it with the EDL, the BNP or UKIP. But then, at the risk of generalising, the drinking and pub life that goes with supporting England is not black people’s culture either.

The World Cup kicks off in Sao Paulo tomorrow [12 June 2014] at 9 p.m. Irish and English time, when Brazil has the home advantage against Croatia in Group A. England’s first match is against Italy in Manaus at 11 p.m. on Saturday night. When England is not playing, I shall be cheering for Greece, and then for Italy.

Who are cheering for? Have you drawn teams in your family, in your parish or at work?