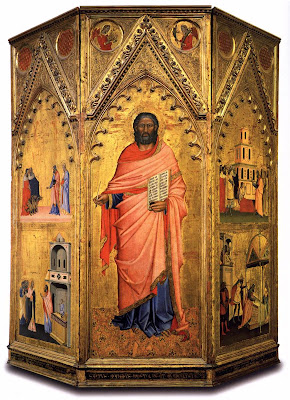 Saint Matthew the Evangelist (מתי/מתתיהו, Gift of Yahweh; Ματθαίος) is one of the Twelve and is identified with both the author of the first of the four gospels and with Levi the publican or tax collector in the Gospels according to Saint Mark and Saint Luke.

According to tradition, Saint Matthew was the son of Alpheus a publican or a tax collector by profession. He was the Levi in the Gospels according to Saint Mark and Saint Luke, and was called to be a disciple while he was sitting in the tax collectors’ place at Capernaum.

We know little about Saint Matthew’s subsequent career – and what little we know is little more than speculation and legend. Saint Irenaeus says Matthew preached the Gospel among the Hebrews, Saint Clement of Alexandria claims he did this for 15 years, and Eusebius maintains that, before going into other countries, he gave them his Gospel in his mother tongue.

Some ancient writers say Matthew later worked in Ethiopia to the south of the Caspian Sea – not Ethiopia in Africa; other say he worked in Persia, Parthia, Macedonia or Syria. According to Heracleon, who is quoted by Clement of Alexandria, Saint Matthew did not die a martyr. But other accounts, including the Roman Martyrology, say he died a martyr’s death in Ethiopia.

Like the other evangelists, Saint Matthew is often depicted in Christian art as one of the four living creatures of Revelation (4: 7) – in Saint Matthew’s case, a winged man carrying a lance in his hand.

Last month in Florence, we spent some hours in the Uffizi, one of the greatest art galleries in the world, paying particular attention to the great works of religious art. The collection of works by Florentine artists includes Orcagna’s Triptych of Saint Matthew.

The powerful Guild of Moneychangers or Bankers commissioned Andrea di Cione (1343-1368), also known as Orcagna, by to paint this triptych for their pilaster in the Church of Orsanmichele, the church of the Florentine Guilds.

Orcagna was a painter, sculptor and architect, and he was a consultant in 1357 and in 1364-1367 at the building of the Duomo or Cathedral of Santa Maria del Fiore in Florence, which we had visited earlier the same day.

The painting was commissioned on 15 September 1367, but Orcagna died within a year on 25 August 1368, and the task of completing this great work of art passed to his younger brother, Jacopo di Cione, who finished it in 1369.

In the completed painting, the central panel of Saint Matthew is flanked by four smaller panels with images from the stories and myths that grew up about the moneychanger-turned-evangelist: the Miracle of the Two Dragons; the Calling of Matthew; the Resurrection of King Egippus’ son; and the Martyrdom of the Saint.

In the panel showing the calling of Saint Matthew, Levi the tax collector has jumped up, startled, leaving his young assistant sitting at a table to continue counting the day’s proceeds. Christ holds the Gospels in his left hand and with his right hand points to the other disciples he is summoning Levi.

Surprised by the intrusion and the call, the startled Levi hoplds up his joined hands as if to plead to be left alone. He appears to be asking: “Why me?”

Today, Saint Matthew is regarded as the patron saint of accountants and bankers. Given the unsaintly performance of our bankers in recent years, I can hardly imagine that the prospect of being the patron saint of bankers was a good career move for this tax collector. But then, Christ came not to call the righteous but sinners to salvation.

Perhaps Matthew should be the patron saint of those who answer the call to ministry. And welcome back to your final year of being equipped to answer that call. I hope none of us will be worried about how we are remembered, whether people get it right about where we worked in ministry and mission, or whether they even get our names right.

And now may all we think, say and do be to the praise, honour and glory of God, + Father, Son and Holy Spirit.

O almighty God,
whose blessed Son called Matthew the tax-collector
to be an apostle and evangelist:
Give us grace to forsake the selfish pursuit of gain
and the possessive love of riches;
that we may follow the way of your Son Jesus Christ,
who is alive and reigns with you and the Holy Spirit,
one God, now and for ever.

God of mercy and compassion,
we have shared the joy of salvation
that Matthew knew when Jesus called him.
Renew our calling to proclaim the one
who came not to call the righteous but sinners to salvation,
your Son Jesus Christ our Lord.

Canon Patrick Comerford is Lecturer in Anglicanism and Liturgy, the Church of Ireland Theological Institute. This reflection was shared at the Eucharist celebrated with Year III deacon-interns on 21 September 2012.

Posted by Patrick Comerford at 09:00 2 comments: