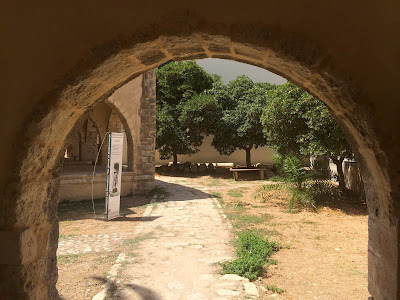 The Kara Musa Pasha Mosque is one of the surviving treasures from Ottoman Crete in the old town of Rethymnon (Photograph: Patrick Comerford, 2014)

The Kara Musa Pasha Mosque, at the corner of Arkadíou Street and Viktoras Ougo (Victor Hugo) Street, is one of the surviving treasures from Ottoman Crete in the old town of Rethymnon.

The mosque, with its domes and part of its ruined minaret stands close to Plateia Iróon or Heroes’ Square, which was once a chaotic traffic roundabout but is now a pleasant paved square that marks the east end of the old town.

For many years, the Kara Musa Pasha Mosque and its grounds have housed the Inspectorate of Byzantine Antiquities, but was generally closed to the public.

In the past, I have sought to catalogue the surviving former mosques of Rethymnon, but until today I have never managed to gain access to the Kara Musa Pasha Mosque. 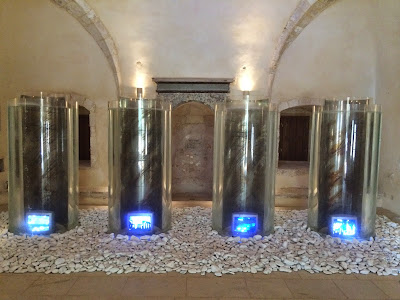 The exhibition, The Ghosts of Mediterranean, by Professor Marianna Strapatsakis, in currently housed in the Kara Musa Pasha Mosque (Photograph: Patrick Comerford, 2014)

This afternoon [24 August 2014] however, I visited the mosque for the first time. It is the venue for an exhibition, The Ghosts of Mediterranean by the visual artist, Professor Marianna Strapatsakis, which opened on 5 June and has continued long after last month’s original planned closing date of 4 July.

This exhibition has travelled throughout Europe, and most recently was on show at the National Archaeological Museum in Athens in 2012.

This video installation consists of four transparent cylinders, with a screen placed in each, and pebbles collected on the floor space surrounding the cylinders.

This modern piece of art seeks to bring together the conventional and the modern in harmony. The focal point is the cultures of the Mediterranean – the pillars of western civilisation – as well as ancient Greek civilisation, with video material from the Temple of Aphaia. Through the symbolisms of the eternal procedure of birth, death and rebirth, the artwork of Marianne Strapatsakis stands in harmony with the ancient sculptures.

She is a former artistic manager of the Greek magazine Archaeology and Art, and since 2004 she has been an associate professor at the Department of Audiovisual Arts in the Ionian University. 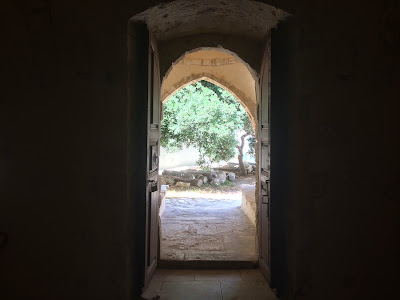 Looking out into the grounds of the Kara Musa Pasha Mosque (Photograph: Patrick Comerford, 2014)

The Kara Musa Pasha Mosque is a beautiful location for this exhibition in Rethymnon, which has been organised by the Museum of Contemporary Art of Crete, located near the Fortezza in the old town.

The mosque was built on the site of a Venetian-era monastery dedicated to Saint Barbara, and was named after an Ottoman admiral who commanded the naval forces at the Turkish capture of Rethymnon in 1645.

The mosque is named after Kara Musa Pasha, who was born in Vikoča near Foča, now in Bosnia-Herzegovina. Sultan Ibrahim I named him as the Grand Vizier in 1647 after the execution his predecessor. But Kara Musa Pasha was then at sea, taking part in the Ottoman war to capture Crete.

The sultan also appointed him the Grand Admiral of the Ottoman Navy, but the imperial seal for his promotion was still on its way to him when he died on 21 September 1647 in front of the castle of Iraklion.

After the Turks captured Rethymnon, Saint Barbara’s Monastery was turned into a mosque. The central building has a typical square floor plan with a mihrab pointing towards Mecca.

Beside the mosque and the stump of the minaret is a domed, three-vault mausoleum that may have been the tomb of the founder of the mosque, but it was partly destroyed during building work on Viktoras Ougo Street many years ago.

The mosque complex includes a vaulted fountain – with a tasteless modern metal tap and cement basin – a courtyard and decorated columns that once stood over Turkish graves but now lie flat on the sun-baked ground.

Earlier this morning, I had attended the Divine Liturgy in the Church of the Four Martyrs, beside the Hotel Brascos where I am staying. The Liturgy was beautifully served, with rich singing and a congregation of 250-300 people packed inside the cathedral-sized church.

We had lunch in Akri, an old taverna on the corner of Soliou Street in the old town, which has been one of our favourites since we first came to Rethymnon in the 1980s.

The temperatures are still in the mid-30s each day, although this is the end of August, and there was nowhere better to spend the afternoon after visiting the exhibition today than on the beach, swimming and enjoying the warm waters of the Mediterranean. 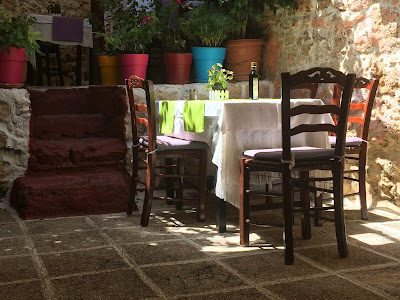 Lunch in Akri in the old town of Rethymnon today (Photograph: Patrick Comerford, 2014)

Posted by Patrick Comerford at 17:13 No comments: