Seas and coast spread out below Killiney Hill 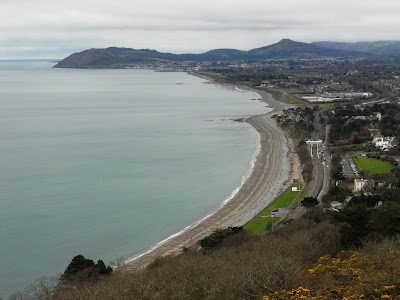 The view south from Victoria Hill in Killiney, across Killiney Beach, Bray and towards Bray Head (Photograph: Patrick Comerford, 2012)

After Morning Prayer in the chapel, a few hours at my desk, and a family visit to Mount Jerome Cemetery in Harold’s Cross, two of us headed across to Cabinteely late in the morning to have a look at Cabinteely House, one of the hidden gems of the south-east suburbs of Dublin.

Cabinteely House is set in expansive, open suburban parks, and inside it is said to have an impressive 18th century staircase, decorative plasterwork and a vaulted gallery. I was told there are tours of the house in the summer, but extensive work was being carried out today, and there was a large skip outside.

Behind the house, I visited the new Japanese gardens laid out by Dún Laoghaire-Rathdown Parks Department. Nearby, the newly refurbished stables house new tearooms, while the courtyards and grain-store have been converted into a museum and arts centre. 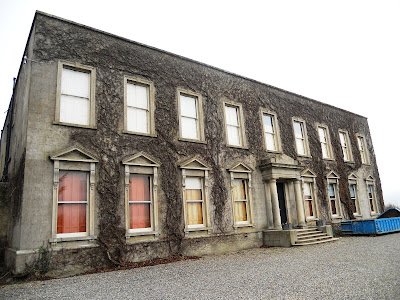 Cabinteely House ... owned in the past by the Nugent, O’Byrne and McGrath families (Photograph: Patrick Comerford, 2012)

Cabinteely House was built around 1769 by Robert Nugent (1702-1788), Lord Clare and later Earl Nugent. In the 1740s, it is said, Nugent, an Irish socialite from Co Westmeath, lent large sums of money to the Prince of Wales, but he was never repaid. The political appointments and peerage titles he received later in life seem to have been a public acknowledgement by King George III, son of the Prince of Wales, of this indebtedness. In 1767, Nugent became Baron Nugent and Viscount Clare, and in 1776 he was made Earl Nugent.

The house later passed to the O’Byrne family, including William Richard O’Byrne (1823–1896), MP for Co Wicklow (1874-1880) and author of the Naval Biographical Dictionary. In 1933, Joe McGrath of the Irish Hospital Sweepstakes bought the house. Cabinteely House finally passed to Dún Laoghaire-Rathdown County Council in 1984.

From Cabinteely, we drove on to Killiney. Initially, we were planning a walk on the beach, but instead we parked in the car park at Victoria Hill Park, behind Holy Trinity Parish Church and the Fitzpatrick Castle Hotel and climbed Victoria Hill to obelisk at the top of Killiney Hill.

From the top of the hill, some people say, it is possible on clear days to see as far as the Mourne Mountains in Co Down and the north coast of Wales. It was not as clear as that today, but we had a magnificent view that stretched across Dublin Bay, Killiney Bay, Bray Head and the Great Sugar Loaf mountain – views that stretched from the Wicklow Mountains to Howth Head.

The coastal area of Killiney is often compared to the Bay of Naples – a comparison reflected in the names of surrounding roads, such as Vico, Sorrento, Monte Alverno, San Elmo, and Capri. Since early 2010, a pod of bottlenose dolphins has been seen regularly in Killiney Bay, but we did not see them today.

Killiney Hill Park or Victoria Hill Park was once part of the estate of Killiney Castle, now an hotel, and the park was opened in 1887 to mark the golden jubilee of Queen Victoria’s coronation. 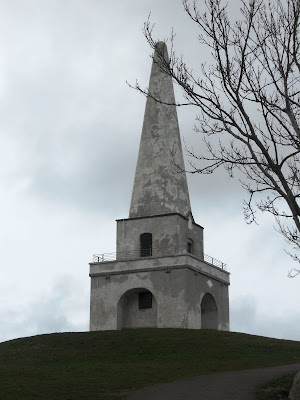 The obelisk at the top of Killiney Hill (Photograph: Patrick Comerford, 2012)

A short walk brought us to the top of Killiney Hill. The obelisk at the top and many of the walls on the hill date from a famine in 1742 and relief works on behalf of poverty-stricken local people. The obelisk is a prominent landmark and carries the inscription: “Last year being hard with the poor walks about these hills and this were erected by John Mapas, June 1742.”

Nearby, the “Wishing Stone,” dated 1852, is of uncertain origin. Another smaller obelisk a little further on is known as Boucher’s obelisk and is inscribed: “Mount Mapas.”

Killiney Castle was built as Mount Mapas at the bottom of the hill in 1741 by Colonel John Mapas. By 1755, Mount Mapas had been acquired by a Captain Maunsell. Killiney Beach was becoming a popular seaside destination by then, and in 1757 John Rocque’s map shows bathhouses near White Rock, on Killiney Beach.

By 1755, Mount Mapas was known as Roxborough, and it was the home of Captain Edward Maunsell, who was High Sheriff of Co Dublin that year. Before he died in 1765, he sold his interests in Killiney to the then Colonel the Hon Henry Loftus, MP for Bannow, Co Wexford. He called the place Loftus Hill and converted the barren stony soil to meadow and pasture and cut a road around Killliney Hill. But, when Henry Loftus become Viscount Loftus of Ely, he inherited other estates, including Loftus Hall in Co Wexford and Rathfarnnham Castle, and in 1772 he sold his Killiney estate and 150 acres on the slopes of Killiney Hill. 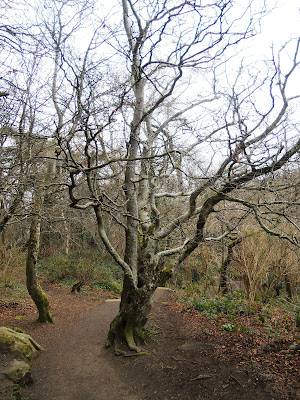 Trees with a story to tell on the slopes of Killiney Hill (Photograph: Patrick Comerford, 2012)

The Military Road and the Martello Tower in Killiney were completed in 1805. In 1815, the Duke of Dorset died in a hunting accident on Killiney Hill.

By the mid-19th century, the hill and much of Killiney were owned by Robert Warren. In 1840, he enlarged the house, adding the fanciful Victorian façade, embellished with turrets, towers and battlement, and renaming it Killiney Castle. He developed many of the Victorian residential areas and sold land for building a new railway line along the coast to Bray, running beneath Killiney Hill.

With the extension of the railway line, the coastline became even more popular, and Killiney began to expand as a suburban village. The Church of Ireland parish church, Holy Trinity Church, was built in 1859 beside Killiney Castle.

The opening of Victoria Park by the Prince of Wales in 1887 to mark Queen Victoria’s golden jubilee and the opening of Vico Road two years later in 1889 enhanced the popularity of Killiney.

Warren also built a second castle in Killiney in 1840, naming it Victoria Castle in honour of Queen Victoria’s coronation three years earlier. After a fire destroyed its interior in 1928, Victoria Castle was magnificently restored by Sir Thomas Power of the distillery family, and he renamed it Ayesha Castle, after the character in Ryder Haggard’s novel She. The Donegal musician and signer Enya bought the place in 1997, and renamed it Manderley Castle, after the house in Daphne du Maurier’s novel Rebecca.

All these castle, the railway line, the islands of Dalkey, Killiney Strand, the beaches of Bray, the Wicklow Mountains, Howth Head, Dublin Bay and the Irish Sea spread beneath us as we looked down from Killiney Hill in the early afternoon. After our descent, we drove into Dalkey and had a late lunch in Idle Wilde Café in Saint Patrick’s Road in the heart of Dalkey Village before returning to the institute. 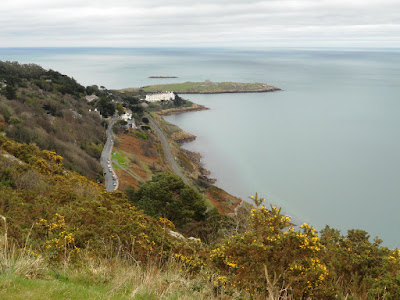 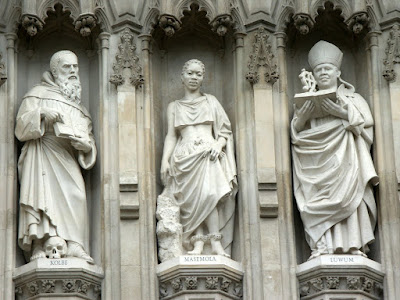 ‘See what love the Father has given us, that we should be called the children of God’ (I John 3: 1) … a statue of Archbishop Luwum (right) on the façade of Westminster Abbey

We began with a prayer written almost 400 years ago by Bishop Lancelot Andrewes in 1626:

Blessed are you, creator of all,
to you be praise and glory for ever.
As your dawn renews the face of the earth
bringing light and life to all creation,
may we rejoice in this day you have made;
as we wake refreshed from the depths of sleep,
open our eyes to behold your presence
and strengthen our hands to do your will,
that the world may rejoice and give you praise.

A note on the service sheet this morning tells the story of the martyred Ugandan archbishop:

Archbishop Janani Jakaliya Luwum (1922-1977), who is recalled on this day in a lesser Festival in the Calendar of the Church of England and other Anglican churches, was the Archbishop of the (Anglican) Church of Uganda from 1974, and was one of the most influential modern Church leaders in Africa. He was murdered in 1977 by either Idi Amin personally or by Amin’s henchmen.

The archbishop was born in a village in 1922, and trained as a primary teacher before he converted to Christianity in 1948. A year later, he went to Buwalasi Theological College, and he was ordained deacon in 1953 and priest in 1954. He was consecrated a bishop in 1961 and five years later became Archbishop of the Province of Uganda, Rwanda, Burundi and Boga-Zaire – the second African to hold this position.

Archbishop Luwum was openly critical of the excesses of Idi Amin and his regime after he seized power in 1971. In 1977, the archbishop delivered a note of protest to Idi Amin against the policies of arbitrary killings and disappearances. Shortly after, he and other Church leaders were accused of treason.

On 16 February 1977, he was arrested and was publicly humiliated at a rally called in Kampala by Amin. He was killed the next day – supposedly in a car crash, although he had been shot through the mouth and in the chest several times. Time magazine suggested Amin himself had pulled the trigger.

Archbishop Janani Luwum is recognised as a martyr in the Church of England and other Anglican churches, and his death is marked on this day, 17 February, as a Lesser Festival. His statue is among those of the Martyrs of the Twentieth Century on the west façade of Westminster Abbey.

Canon Patrick Comerford is Lecturer in Anglicanism and Liturgy, the Church of Ireland Theological Institute

Failure to listen to ‘Occupy’ protests ‘missed opportunity’ for Church

Today’s edition of the Church of Ireland Gazette (17 February 2012) publishes the following photograph and half-page news report on page 4:

Failure to listen to ‘Occupy’
protests ‘missed opportunity’ for
the Church – C. of I. theologian

Canon Patrick Comerford (left) is pictured with the Revd Dr Peter Waddell in the Chapel of Sidney Sussex College, Cambridge

The Church has missed “a blessèd opportunity” in mission through the failure of the community at St Paul’s Cathedral, London, to listen constructively to the “Occupy” protesters encamped outside the building, according to a Church of Ireland theologian.

Preaching recently at Choral Evensong in the Chapel of Sidney Sussex College, Cambridge, Canon Patrick Comerford, who is Lecturer in Anglicanism and Liturgy in the Church of Ireland Theological Institute, Dublin, said that when the Church “misses the opportunity to hear the ordinary concerns of people when they articulate them, [it] fails to grasp the intersection between temporal reality and eternal truth.”

Canon Comerford went on to say: “In missing the opportunity to listen to the ‘Occupy’ protesters in London, the community of St Paul’s Cathedral missed an opportunity, a moment in time that can never be presented in the same way again.”

He added: “In this failure, a blessèd opportunity to express the mission of a Cathedral – to allow the nation to speak to the Church and the Church to speak to the Nation – has been lost, never to be recovered in quite the same way again.”