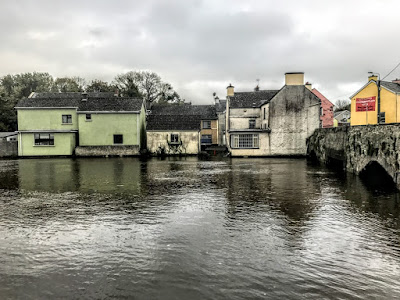 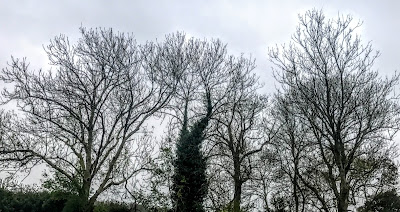 Posted by Patrick Comerford at 18:38 No comments:

Waiting for Ophelia to make
landfall here this morning 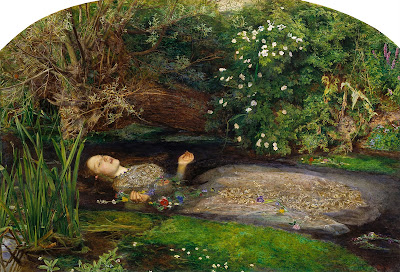 Hurricane Ophelia is about to strike this part of Ireland, making landfall within the next few hours.

Schools and businesses have closed, everyone has been warned not to undertake journeys, and my meetings and visits today were cancelled as soon as the Red Alert was extended to Co Limerick yesterday afternoon.

Met Éireann is warning of winds and gusts from 80 to 130 kph across this part of Ireland today and the weather service issued a red warning for Kerry, Limerick, Clare, Galway, Mayo, Cork, Waterford and Wexford, with an orange wind warning for the rest of Ireland. By late last night, the red warning had been extended to the whole island.

I expect many families in this parish from north Kerry through west Limerick are anxious about what is going to happen when Hurricane Ophelia strikes within the next few hours. The south bank of the Shannon estuary extends along a stretch of over 70 km, from a point north Ferrybridge on the banks of the River Maigue in Co Limerick to a point on the Kerry coast north of Ballybunion.

My images of Ophelia have been shaped over the past half century by William Shakespeare. Fifty years ago, as a schoolboy in Gormanston in 1967, I had started reading Hamlet, in preparation for sitting Honours English the Leaving Certificate in 1969.

But as I tried to sweep up some of the leaves around the Rectory late yesterday before darkness settled – knowing this was a futile exercise that everything was going to be blown about and swept up in the storm today – the enduring image of Ophelia that came to mind among those leaves was Ophelia, the Pre-Raphaelite painting by Sir John Everett Millais (1851-1852), now in the Tate Britain in London.

In his painting, Millais depicts Ophelia singing before she drowns in a river. Today this work is admired for its beauty and for its accurate depiction of a natural landscape.

Millais painted Ophelia in the Surrey countryside, close to the very place where William Holman Hunt painted The Light of the World.

The painting shows Ophelia singing as she floats in a river just before she drowns. Her drowning is not actually an event in the staged play, but is recalled by Queen Gertrude in Act IV, Scene VII.

She describes how Ophelia fell into the river from an overhanging tree while she was gathering flowers. Ophelia lies in the water singing songs, unaware of the danger (‘incapable of her own distress’). Her clothes, trapping air, have allow her to stay afloat briefly:

Her clothes spread wide,
And, mermaid-like, awhile they bore her up.

But eventually, ‘her garments, heavy with their drink, / Pull’d the poor wretch from her melodious lay’ down ‘to muddy death.’

Gertrude’s description of Ophelia’s death is often seen as one of the most poetically written death scenes in literature.

The painting is known for its depiction of the detailed flora of the river and the riverbank, stressing the patterns of growth and decay in a natural ecosystem. But, while Shakespeare sets Hamlet in Denmark, the Surrey landscape in this painting is quintessentially English.

Ophelia is seen as a woman who has lived a life awaiting happiness, only to find her destiny on the verge of death. The intense colours in the landscape make her pale in comparison.

Ophelia was modelled by the artist and muse Elizabeth Eleanor Siddal (1829-1862), who was then a 19-year-old. Millais had Lizzie Siddal lie fully clothed in a full bathtub in his studio at 7 Gower Street, London. As it was winter, he placed oil lamps under the tub to warm the water, but was so intent on his work that he allowed them to go out. As a result, she caught a severe cold.

Lizzie Siddal married Dante Gebriel Rossetti in Hastings in 1860. She was his model for his paintings of Beata Beatrix and other works, and she was a model for other Pre-Raphaelite artists, including Holman Hunt.

After her tragic death, Rossetti wrote of her:

What of the heart without her? Nay, poor heart,
Of thee what word remains ere speech be still?
A wayfarer by barren ways and chill,
Steep ways and weary, without her thou art,
Where the long cloud, the long wood’s counterpart,
Sheds doubled up darkness up the labouring hill.

Lizzie Siddal’s brother-in-law, William Michael Rossetti, her brother-in-law, described her as ‘a most beautiful creature with an air between dignity and sweetness with something that exceeded modest self-respect and partook of disdainful reserve; tall, finely-formed with a lofty neck and regular yet somewhat uncommon features, greenish-blue unsparkling eyes, large perfect eyelids, brilliant complexion and a lavish heavy wealth of coppery golden hair.’

As schoolboys reading Hamlet, we imagined Ophelia as a turbulent, disturbed and over-active woman, which may also have been a description of Lizzie Sidall. Perhaps this is why Hurricane Ophelia has been so named. 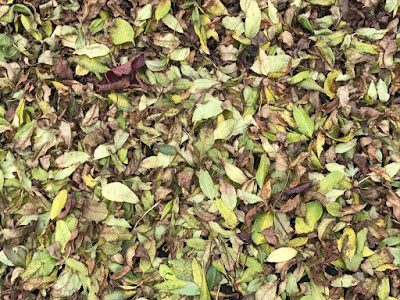 Leaves before the storm … waiting for Ophelia in the Rectory garden in Askeaton (Photograph: Patrick Comerford, 2017)