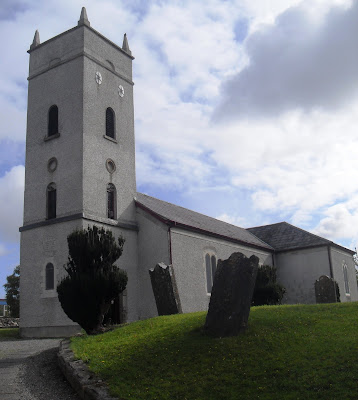 The Church of Saint John the Evangelist in Coolock ... the church dates from 1760, but the church site is pre-Norman (Photograph: Patrick Comerford, 2011)

In the 1994 romantic comedy movie Four Weddings and a Funeral, Rowan Atkinson—better known as Mr Bean – has a cameo role as Father Gerald, a bumbling and stuttering nervous priest who keeps fluffing his lines.

The movie seems to take place in an England of eternal summer, a land that consists almost entirely of green and pleasant countryside and the upper middle-class parts of London.

The first wedding is that of Angus and Laura, and features Father Gerald in a small role as a trainee priest. By the time of the second wedding, when Bernard and Lydia are getting married, Father Gerald is now in holy orders and is a friend of the family who offers to conduct their wedding, his first-ever wedding ceremony. By now, he is even more gaffe-prone, he gets the names of the bride and groom wrong. Despite a bishop being present, and he speaks in malapropisms at the wedding of an “awful wedded wife” instead of a “lawful wedded wife,” and of the couple being “johned in matrimony.”

Father Gerald: ... through your son Jesus Christ, our Lord, who lives and reigns with you and the Holy Goat – ...Ghost, one God forever and ever. Amen. (...) Bernard, repeat after me ... I do solemnly declare that I know not of any lawful impediment ...

Bernard: I do solemnly declare that I know not any lawful impediment ...

Father Gerald: Why, I, Lydia..

Father Gerald: May not be joined in matrimony to Lydia John Hibbot.

Bernard: May not be joined in matrimony to Lydia Jane Hibbot.

Father Gerald: Lydia, repeat after me ... I do solemnly declare (...) that I know not of any lawful impediment why, I, Lydia Jane Hibbott, may not be johned in matrimony ...

Lydia: May not be joined in matrimony ...

Father Gerald: I call upon those persons here present to witness that I, Bernard ... (long pause) Delaney, do take Lydia Jane Hibbott ...

Father Gerald: To be my awful wedded wife.

Bernard: To be my lawful wedded wife.

Not that any of my students are going to end up like Father Gerald, but at least he gets the job down.

I suppose most people in ordained ministry can identify with Father Gerald, not because we are so bumbling and accident-prone, but because it puts us in touch with our constant fears of getting it wrong at sacred, special and public moments such as weddings and funerals.

No-one ever promises you that ordained ministry is going to be about “four weddings and a funeral” – but in the past two days most of my working hours have been taken up with four committees and a funeral.

The committee meetings included a faculty meeting, the Interfaith Working Group, the Commission for Christian Unity and Dialogue, and, this afternoon, the Standing Committee of the General Synod of the Church of Ireland.

This morning’s funeral took place in the Parish Church of Saint John the Evangelist on Tonalegee Road in Coolock in north Dublin, which I first visited around 30 years ago, when the curate was the Revd Kenneth Kearon, now General Secretary of the Anglican Communion Office.

The area of Coolock or ‘Culocke’ was dependent on the Priory of Swords until the arrival of the Anglo-Normans, but in the late 12th century the parish was granted by the Archbishop of Dublin to the Priory of Lanthony in Gloucestershire.

The list of vicars begins around 1186 but comes to an end in 1243. However, there are more continuous records from the mid-16th century, when the vicar was Marmaduke Middleton, later Bishop of Waterford. By the 1590s, the right of presentation passed to the Moore family, who became Earls of Drogheda.

The oldest gravestone in the church grounds dates from 1688 and marks the grave of a man named Thomas Ward who lived in Kilmore. A new Church of Saint John the Baptist was built in 1760 on the site of an older church, Saint Brendan’s, on the banks of the River Santry, opposite Saint Brendan’s Holy Well.

The first Arthur Guinness, founder of the brewery, for example, was a churchwarden in the newly-built Saint John’s 1777 and in 1782. A plaque on the church tower says it was added in 1791 by the Vicar of Coolock, the Very Revd Peter Carleton (1758-1825), who was also the Dean of .Kiallloe

The Very Revd Richard Ponsonby 1772-1853, who was Vicar of Coolock from 1821 to 1828, was a son of Lord Ponsonby. He was Dean of Saint Patrick’s Cathedral at the same time, before becoming Bishop of Killaloe and then Bishop of Derry and Raphoe

Inside, the church has interesting monuments honouring local people and colourful stained-glass windows. The windows in the church porch honour local people who died in World War I, including Captain George C. Colvill.

In 1924, Coolock was united with Santry and Glasnevin, and in 1960 it was united with Raheny. The present rector is the Revd James Carroll, who conducted this morning’s funeral. 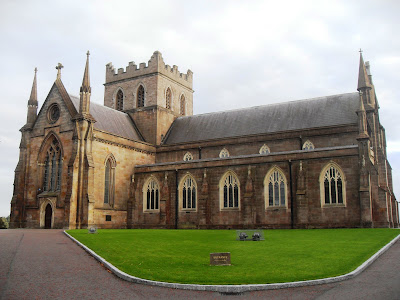 Meanwhile, the furtive round of committees, weddings, funerals and other ministerial tasks continues apace. Earlier in the week, I was back in Saint Patrick’s Cathedral, Armagh, for the ordination of three new deacons by Archbishop Alan Harper – the Revd Jacob Caldwell (Magherafelt) and the Revd Richard Conlan (Ballymore) for the Diocese of Armagh, and the Revd Stephanie Woods for the Diocese of Armagh.

On the way back from Armagh to Dublin, two of us stopped off in Skerries for short break.

Although it was now dark, we drove around the harbour in the lights of the late evening and early night, and then took a short walk on Red Island, where the sound of the wives and deep blues in the night skies brought a sense of refreshment and calm.

Back in Skerries, we had dinner in Tarragon before heading on south to Dublin. 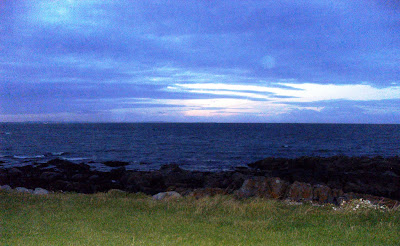 The third year students returned on Monday morning, and on Friday I am in Edgehill Theological College, Belfast, to lead the reflections at the retreat marking the start of the new academic year.

May they enjoy the many weddings they are asked to conduct and weep with those who mourn at the funerals they take part in.
Posted by Patrick Comerford at 22:28 No comments: