From Saint Brigid to Saint Patrick in one morning 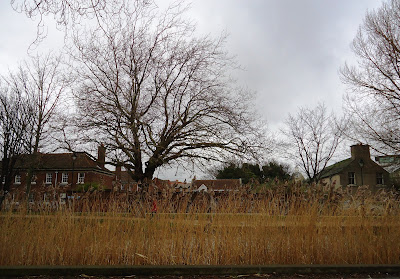 Autumn-like colours on the first day of the Spring along the banks of the Grand Canal in Dublin this afternoon (Photograph: Patrick Comerford, 2013)

After an early morning celebration of the Eucharist for Saint Brigid’s Day in the Chapel of the Church of Ireland Theological Institute, I spent a half-day in Christ Church Cathedral working with Neil Delamere, Conor Morrissey, Anne Heffernan and a team from Mind the Gap Films working on a television programme on Saint Patrick.

The documentary, Slaves, Snakes & Shamrocks, is due to be broadcast by RTÉ1 next month, a few days before Saint Patrick’s Day. We discussed the period when Saint Patrick returned to Ireland, the scope, length, impact and legacy of his mission, how his message was received, his character, and the ways he influenced later developments of Christianity in Ireland.

Using a mix of stand-up comedy, sketches and interviews with historians and experts, comedian Neil Delamere is exploring the fact and fiction surrounding Ireland’s patron saint. The programme will be broadcast on RTÉ1 on Thursday 14 March. 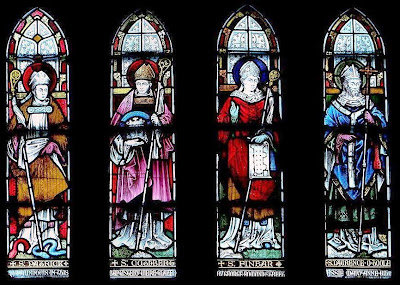 After coffee in Temple Bar, two of us drove along the banks of the Grand Canal and Prtobello, where the colours were more like autumn that the first day of Spring. 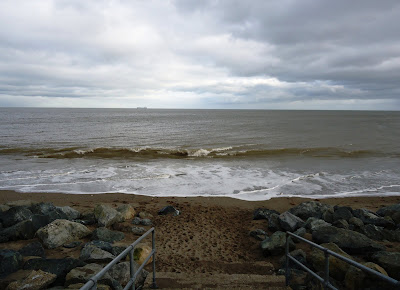 The tide was in at Kilcoole, and as the rain came down our planned walk on the beach was cut short (Photograph: Patrick Comerford, 2013)

We then drove on to Kilcoole in Co Wicklow for a short walk on the beach. But the tide was in and as we crossed the railway line the rains started to come down.

Seen on a wall in the Happy Pear in Greystones this afternoon (Photograph: Patrick Comerford, 2013)

The short walk on the beach became shorter than planned, and we drove back to Greystones and had a late but happy lunch in the Happy Pear.

We picked up a good bottle of Chareau Ksar Reserve du Couvent from the Bekaa Valley, a bottle of Barbera d’Asti from Piedmont in Supervalu and today’s Guardian in the newsagents before returning to a house that has been upside-down and higgledy-piggledy for the past week with painters, builders and decorators giving the place a complete makeover and refit. 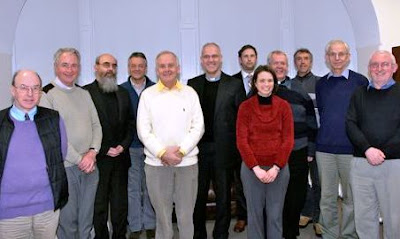 The current edition [Friday 1 February 2013] of the Church of Ireland Gazette carries this half-page news report and photograph on page 3:

The Bench of Bishops of the Church in Wales recently paid a visit to the Church of Ireland Theological Institute (CITI), Dublin.

The bishops held their quarterly meeting in the Institute, but the main purpose of their visit was a fact-finding mission to see how ordination and theological training was carried out in the Church of Ireland and how CITI has been developed to date.

During their visit, the bishops met the director of CITI, the Revd Dr Maurice Elliott; Andrew McNeile of Dublin and Glendalough Diocesan Councils; CITI staff member, Dr Katie Heffelfinger; the Diocesan Director of Ordinands, the Revd Ted Woods; and a number of the intern deacons.

It is hard to believe, with the sharp cold weather outside, that 1 February is supposed to be the first day of Spring. Although the calendar and tradition tells us that Spring starts today, it still feels like winter this morning.

The opening lines of the poem Cill Aodáin by the Gaelic poet Antoine Ó Raifteirí (1779–1835) are well-known to many schoolchildren:

Now that Spring has arrived
the day will grow longer,
and after Saint Brigid’s Day
I shall let my sail go.

Saint Brigid is especially associated with Kildare and the Liffey Plain. But she is second only to Saint Patrick in esteem in Ireland, and Saint Patrick, Saint Brigid and Saint Columba together are known as the three Patrons of Ireland. As such, their names are singled out and highlighted in bold red capital letters in the calendar of commemorations in The Book of Common Prayer.

Unlike Patrick and Columba, however, Brigid was not a missionary saint. Nor was she widely travelled. So why is she remembered with great affection in Ireland today? And why should we bother with commemorating her 1,500 years after she lived and died?

Brigid’s father was Dubtach, a local despot who lived at Faughart, a few miles from Dundalk, in what is now part of the Diocese of Armagh. Her mother, Brotseach, was said to have been a slave of Dubtach and she was sold to a druid shortly before Brigid was born.

Brigid may have been born between the years 451 and 458. The Tripartite Life of Saint Patrick mentions Saint Brigid meeting Saint Patrick. At great personal risk, she converted to Christianity at a young age and was baptised with the name Brid or Brigid. She then gave her life to God and gave away her personal and inherited wealth, choosing to serve God and to serve the poor.

There are many myths and legends attached to her life story. One says that as a child, her mother placed her in charge of the dairy. One day, she gave away so much milk and butter to poor people that none remained for the family. She feared her mother’s response and so resorted to prayer. When her mother returned to the dairy, she found such an abundance of milk and butter that she praised the dairy maids for their industry.

She founded the first convent in Ireland on Croghan Hill in Co Westmeath. Later, she and her first seven companions went to Ardagh to make their final vows in the presence of Saint Mel, Bishop of Ardagh.

It is said that Saint Mel was old and a little forgetful, and when it came to professing Brigid as a nun instead he consecrated her as a bishop.

Later, she founded her principal abbey in Kildare. This grew into an unusual community, with both monks and nuns sharing the one site. She insisted that a vital component of the spiritual life is having a soul friend (anam cara).

About the year 490, Saint Conleth was consecrated the first Bishop of Kildare, and Brigid and Conleth seemed to have worked well together although they had a somewhat complex relationship. It appears Saint Brigid held the reins firmly and ruled the two communities, both monks and nuns, and she is sometimes portrayed wearing a mitre and holding a crozier.

There is no exact date for her death. It is said that she died at the age of 70, sometime between the years 521 and 528. She was buried first in Kildare, but is now said to be buried in Downpatrick Cathedral, alongside Saint Patrick and Saint Columba.

Since her days, Kildare Cathedral has been the site of unbroken Christian worship for over 1,500 years, making it one of the oldest sites, if not the oldest site, of continuous worship in Ireland.

Today we thank God for the life of:

● a woman who links the faith of the early Church on this island with the faith of the whole Church – there was an important truth behind the Irish efforts to link her birth with the year of the Council of Chalcedon, defining our faith against the heresies of the day.
● a woman who builds the Church, laying both the physical and mission foundations of the Church.
● a woman who balances wisdom and common sense – something most of us find lacking in equal measure, most of the time.
● a woman who is more than a spiritual guide to both men and women.
● a woman who leads the sheep into one flock with one shepherd – an important role model for episcopal ministry in the light of our current debates throughout the Church.
● a woman who, although not a missionary herself, in her ministry equips others, both men and women, lay and ordained, for the mission of the Church.

It could be said that as a place of both historical and religious importance, Saint Brigid’s Cathedral, Kildare, is second only to that of Saint Patrick’s Cathedral, Armagh. When I preached there two years ago I came across this prayer for the cathedral and for its visitors and I think it applies equally to this chapel and to the other churches we find ourselves in:

Eternal Father,
For this holy and beautiful house of prayer,
We ask your mercy and seek your continual help:
That it may be a home of refuge amidst the storms of this world,
A witness to your eternal truth and goodness,
A light to those who are in darkness,
Hope to the fallen and strength to the weak and faint hearted:
Through Jesus Christ our Lord. Amen. 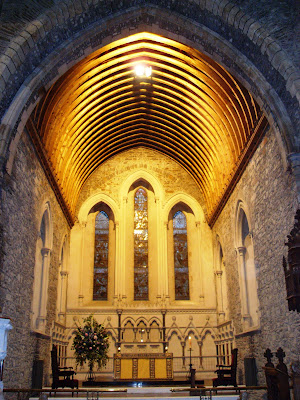 Father,
by the leadership of your blessed servant Brigid
you strengthened the Church in this land:
As we give you thanks for her life of devoted service,
inspire us with new life and light,
and give us perseverance to serve you all our days;
through Jesus Christ our Lord.

God of truth,
whose Wisdom set her table and invited us to eat
the bread and drink the wine of the kingdom.
Help us to lay aside all foolishness
and to live and walk in the way of insight,
that in fellowship with all your saints
we may come to the eternal feast of heaven;
through Jesus Christ our Lord.

Canon Patrick Comerford is Lecturer in Anglicanism and Liturgy, the Church of Ireland Theological Institute. This reflection was shared at the Eucharist on Saint Brigid’s Day, 1 February 2013.

The photograph at the top is of a stained glass window in Christ Church Cathedral, Dublin (Patrick Comerford)