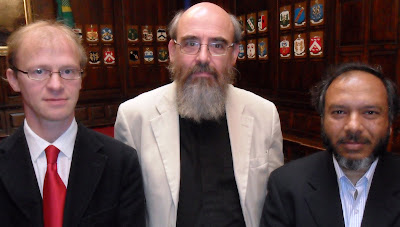 Speaking at the annual general meeting of the Irish Campaign for Nuclear Disarmament in the Oak Room, The Mansion House, Dublin, this afternoon [25 September 2010], the President of Irish CND, the Revd Canon Patrick Comerford, said:

It is shocking to read research by the development agency Trócaire that the Irish state has over €30 million invested in companies that produce single-use components for nuclear weapons systems. This money is invested through the National Pensions Reserve Fund. Why is that Norway can ban its state pension fund from investing in such companies, while our state considers to invest in them as if there was no connection between what the state says and how the state invests our money?

If we continue to invest like this, there will be no need to worry about the future of our pension funds. For if nuclear weapons are used, then there may be no-one alive to draw down those pensions.

We all know the consequences when morality is no longer a factor in the public finances of this state. A state that allows our money to be invested this way, despite its public pronouncements on the nuclear arms race, eventually loses sight of the real moral priorities in life today. Is it any wonder that in Ireland we are in such an appalling and dreadful fiscal abyss of today?

The remarks by the Minister for Foreign Affairs, Mr Micheál Martin, reported in The Irish Times this morning, are encouraging when it comes to government policy and intentions, but disappointing as a true insight into where the nuclear powers are at the moment, digging their heels in and refusing to acknowledge the pressing and moral need for nuclear disarmament.

Mr Martin, who is in New York for a meeting on revitalising the work of the Conference on Disarmament, says the Conference on Disarmament, which Ireland joined in Geneva in 1999, “has not managed to engage in substantive work for well over a decade.” And he expressed the frustration of us all when he says emphatically: “The status quo cannot continue”.

Mr Martin rightly says that the conference, which is bogged down in procedural wrangling, “is an example of all that is worst in the UN system. It is in urgent need of dramatic reform.”

Paralysis at the Conference on Disarmament is all the more unacceptable because President Obama had given a new impetus to disarmament by calling for a world free of nuclear weapons. And that stagnation is in sharp contrast with recent Irish successes in disarmament. For example. the Convention on Cluster Munitions, which was adopted in Dublin in 2008, entered into force at the beginning of last month, on 1 August. Earlier, in May, the Irish diplomat Alison Kelly chaired the debate on the Middle East at the Nuclear Non-Proliferation Treaty (NPT) Review Conference, overcoming US reluctance to schedule a conference in 2012 on making the Middle East a nuclear-free zone.

The NPT Review Conference was an obvious priority for Irish CND this year, and this has built up and deepened closer working relationships with government, political parties and other organisations and campaigns, including World without Wars and without Violence (Ireland), Mayors for Peace, AfrI, Trócaire, PANA, Pax Christi, CND in Britain, and the Irish School of Ecumenics. The foreign affairs spokespersons of various political parties have reiterated the importance of Ireland’s role in promoting nuclear disarmament. But those words must be translated into action with strong political leadership from Ireland on this life-and-death issue.

The NPT Review Conference also provided opportunities for further positive and constructive dialogue with the Department of Foreign Affairs and for pushing internationally for ratification of the Comprehensive Test Ban Treaty. The ambassadors to Ireland of the five nuclear-weapons powers – the US, Russia, France, the UK and China – also heard our views in advance of the Review Conference.

In New York this week, Mr Martin urged the US to fulfill President Obama’s pledge to ratify the CTBT, which has been blocked by Republicans in the US Senate. “Ireland has consistently been a proponent of a rules-based global order centred on strong international institutions,” he told a ministerial meeting for promoting the entry into force of the CTBT.

That treaty aims to hamper the development and the qualitative improvement of nuclear weapons and is one of the essential pillars in the nuclear disarmament and non-proliferation framework. Ireland is one of 182 countries to have ratified the treaty, and the greatest obstacle to implementation remains the resistance of nine “annex two” states with civil or military nuclear programmes.

Members of Irish CND took part in a major conference on an independent Irish foreign policy, hosted by the Peace and Neutrality Alliance earlier this month. The conference included a workshop on the NPT.

In the past two years, the International Peace Bureau’s Seán MacBride Peace Medal, which is sponsored by Irish CND, has been was awarded to American Peace Education and human rights campaigner Betty Reardon and the Indian arms control campaigner Binalakshmi Nepram.

It was an honour to take part in the programme surrounding the visit of the Peace Boat and the hibakusha to Dublin this year. With World without Wars we co-hosted this visit in June. On board the Peace Boat were nine hibakusha, survivors of the Hiroshima atomic bombing, who spoke about their experiences around the world as part of the Peace Boat’s Global Voyage for a Nuclear-Free World project.

After a round-table discussion in Dublin, the hibakusha laid a garland of paper cranes at the cherry tree in Merrion Square, and were guests at a reception here in Mansion House hosted by the Lord Mayor of Dublin, Ms Emer Costello. I found it truly encouraging at that reception that the Lord Mayor would so publicly reaffirm this city’s support for the Mayors for Peace. The project director, Akira Kawasaki, says the visit to Dublin was one of the most worthwhile port stops the hibakusha made during their voyage.

We have marked Hiroshima Day twice since the last a.g.m. On both occasions, it was an honour as president to speak at the this moving commemoration at the cherry tree in Merrion Square, in the presence of a Deputy Lord Mayor and the Japanese Ambassador to Ireland, Mr Toshinao Urabe.

Last night was Culture Night in Dublin. But Irish CND has long made the connection between culture and campaigning. And in the past year Irish CND and the Irish Film Institute jointly sponsored a screening of Stanley Kubrick’s 1964 satire on the madness of nuclear weapons, Dr Strangelove. The playwright Bernard Farrell introduced the movie, and there was a large turnout. In Temple Bar this year too, two hibakusha, survivors of the atomic bombing of Hiroshima in 1945, shared their experiences, with both Irish musicians and Japanese guests offering their musical contributions.

Irish CND faces difficult times ahead. But we can be encouraged by the increase in our activities in the past year, and the response they have generated. Campaigning for nuclear disarmament is a moral imperative, but in the past year we have also found it is politically challenging, socially rewarding and culturally enhancing. The urgency of campaigning for the abolition of nuclear weapons is as pressing now as it has ever been. Let us take heart from a year that in many ways has been a good one for Irish CND.

The guest speaker at the annual general meeting of Irish CND was Mr Tony D’Costa of Pax Christi .
Posted by Patrick Comerford at 13:00 No comments: