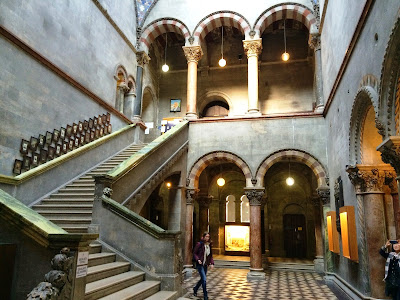 Inside the Museum Building ... my favourite building on the campus in Trinity College Dublin (Photograph: Patrick Comerford, 2014)

I have spent much of the past two days in Trinity College Dublin, at a 24-hour residential meeting of the Ireland and Northern Ireland boards of the Anglican mission agency Us (formerly the United Society for the Propagation of the Gospel, USPG).

After a mid-day celebration of the Eucharist in the College Chapel, most of our discussions took place in the board room in the TCD Long Room Hub, dined at Commons in the Dining Room, where we also had lunch each day, and had breakfast in No 40, on the east side of New Square.

The Trinity Long Room Hub building opened in 2010 in Trinity’s historic Fellows Square on the busy intersection between the university campus and Nassau Street. This pivotal location was chosen by the university to highlight the centrality of the arts and humanities to its mission and to society. 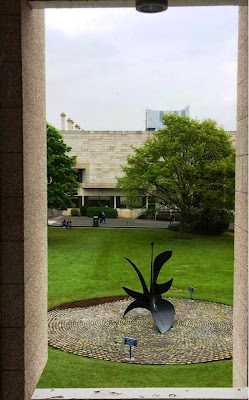 Each window in the Long Room Hub opens onto a different and unexpected vista on the campus (Photograph: Patrick Comerford, 2014)

The building’s striking modernity is in sharp contrast with its classical surroundings, bringing together the past and the present in the arts and humanities. Each of its many windows opens onto a different and unexpected vista on the campus.

The Trinity Long Room Hub houses the Arts and Humanities Research Institute of TCD, one of five flagship research institutes of the university, and the one dedicated to promoting and facilitating innovative research across its nine arts and humanities member schools, including the School of Religions, Theology and Ecumenics.

This is a signature building at the heart of the campus in TCD, and its prominent location signifies the centrality of the Arts and Humanities in the university and in society. The Trinity Long Room Hub takes its name from the Library’s iconic ‘Long Room’ to mark its strong links with the Library and to express the vital importance of its unique collections for the activities of our scholarly community.

In contrast to the Hub, my favourite building on the campus is the Museum Building on the south side of New Square, close to No 40 and beside the Berkeley Library. 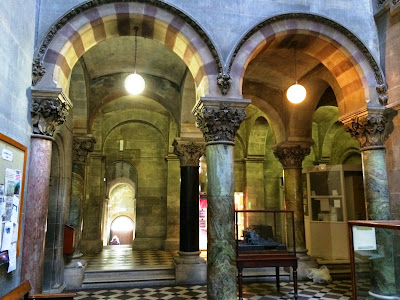 The Museum Building is a Palazzo-style building inspired by Byzantine architecture in Venice (Photograph: Patrick Comerford, 2014)

Early this morning, after breakfast, I brought one of our board members from London to visit the Museum Building, which was built between 1853 and 1857 by Thomas Newenhan Deane and Benjamin Woodward.

This is a Palazzo-style building, inspired by Byzantine architecture in Venice, and finished in Lombardo-Romanesque detailing, with 108 highly-decorated carved capitals.

The Museum Building was built from a vast number of different and contrasting forms of stone. There is a college tradition that it includes some form of stone from every quarry working in Ireland at the time of it was built.

The exterior walls were first built with Calp Limestone, and then faced with Ballyknockan Granite from Co Wicklow. The quoins, columns and 108 capitals, as well as the string course which can be seen half way up the building, are all of Portland stone from the Isle of Portland in Dorset. The tympanum over the heavy wooden main door to building and which displays the college coat of arms is of Caen stone.

Initially Deane and Woodward had planned to build the interior walls with plastered rubble, but later decided to use Caen Stone.

The large domed central hall makes heavy use of Irish stone. The Romanesque arches between each column use alternating yellow and red stained blocks that sit on bases and capitals of carved Portland Stone. The central staircase and floors of the upper balconies are also made of Portland Stone.

The main entrance hall has 14 full columns and 18 half-columns of marble from Cornwall, Galway, Cork, Armagh, Offaly, Kilkenny, and Fermanagh.

The carvings throughout the building are by the brothers John and James O’Shea, who gathered wild flowers to use as models from the college botanical garden in Ballsbridge. There are seven carvings that relate specifically to Aesop’s Fables, and one is said to refer to Charles Darwin and the theory of evolution.

The Museum Building was restored in a three -ear conservation programme in 2010-2013, when many of the O’Shea carvings were also restored to their original state.

The Museum Building in Oxford was also designed by Woodward and Deane and decorated by O’Shea and Whelan (Photograph: Patrick Comerford, 2013)

The Museum Building in Trinity College Dublin is interesting to compare with the the Oxford University Museum, also designed by Thomas Newenham Deane and Benjamin Woodward and built in 1861.

The designs of both museums design were directly influenced by the writings of John Ruskin, who made many various suggestions to Woodward. They also display the influence of Pre-Raphaelite principles of architectural style.

In Oxford, the Irish stone-carvers O’Shea and Whelan also created lively freehand carvings of animals and plants in the Gothic manner.

Three university buildings – two in Dublin and one in Oxford – complementing each other and offering interesting contrasts and comparisons.