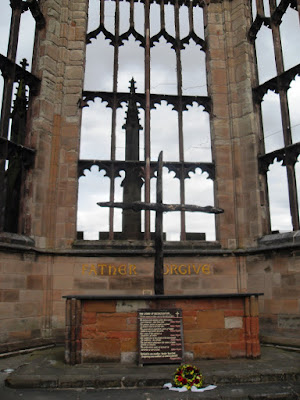 The Cross of Nails in Coventry Cathedral (Photograph: Patrick Comerford)

Quite often, we pray the Litany in the Book of Common Prayer (see pp 175-178) as our Friday morning office in the chapel of the Church of Ireland Theological Institute. However, this morning our prayers incorporate the Litany of Reconciliation from the Community of the Cross of Nails in Coventry Cathedral.

He explained that he had not used the phrase “Father forgive Them” … because we all have sinned and fallen short of the glory of God (Romans 3: 23).

Continuing the theme of Jewish Spirituality:

Our hymn this morning, We turn to Christ anew (Irish Church Hymnal, No 604), by Bishop Timothy Dudley-Smith, introduces many of the themes in this Litany from Coventry Cathedral.

We turn to Christ anew
who hear his call today,
his way to walk, his will pursue,
his word obey.
To serve him as our king
and of his kingdom learn,
from sin and every evil thing
to him we turn.

We trust in Christ to save;
in him new life begins:
who by his cross a ransom gave
from all our sins.
Our spirits’ strength and stay
who when all flesh is dust
will keep us in that final day,
in him we trust.

We would be true to him
till earthly journeys end,
whose love no passing years can dim,
our changeless friend.
May we who bear his Name
our faith and love renew,
to follow Christ our single aim,
and find him true.

This hymn also continues a thread that has been running through the chapel worship all this week since I spoke on Jewish Spirituality on Monday morning.

The hymn tune, Leoni, was first used by the Methodist hymn-writer Thomas Olivers for his hymn The God of Abraham Praise. That hymn was his Christian adaptation or reworking of the Yigdal, which he first heard one Friday in 1770 the synagogue in Duke’s Place, Westminster.

He was given the tune by Meyer Lyon or Meier Leoni (ca 1750-1797), the cantor of the synagogue. The tune is the traditional Friday evening tune for the Yigdal in synagogues in England, and it has also been used for festivals in Germany and in some parts of the former Czechoslovakia. Although the tune probably dates from the 17th century, a Jewish tradition claims that it was sung at the dedication of Solomon’s Temple.

During his lifetime, Meyer Lyon was better known by his stage name Michael Leoni. He was a hazzan at the Great Synagogue in London but also achieved fame as a tenor opera singer in London and Dublin, and as the mentor of his nephew the singer John Braham.

His origins remain unclear. Some accounts say he was born in Frankfurt-on-Main and was invited to London by the German Jews. Other sources say he was born Meir ben Judah Loeb in Poland. He first appeared on the stage in Drury Lane with the great Shakespearean actor David Garrick in 1760. But he returned to the synagogue and from then on had a dual career, appearing on stage in London frequently between 1770 and 1782.

Meanwhile, he was appointed meshorrer (choirboy) in the Great Synagogue in 1767 at a salary of £40 a year, “on the understanding that he was to behave as a Yehudi Kasher” or observant Jew. Although he appeared as Carlos in Richard Brinsley Sheridan’s The Duenna at the Covent Garden Theatre, the play was never performed on a Friday because of Leoni’s engagement with the synagogue.

The story that Leoni was eventually dismissed by the synagogue for performing in Handel’s Messiah is unsubstantiated. His stage success and his limited stipend at the synagogue led Leoni to change career. He became an opera promoter and a performer. In the 1780s, he staged a series of concerts in the Rotunda, Dublin, and for some time in the 1780s he was the manager of the English Opera House in Capel Street, Dublin. The site of the theatre later became Lenihan’s of Capel Street (No 124-125).

Leoni returned to London, but left again in 1788, when he moved to Jamaica. There he become hazzan to the Jewish community in Kingston, where he died in 1797.

Almighty and everliving God,
clothed in majesty,
whose beloved Son was this day presented in the Temple
in the substance of our mortal nature:
May we be presented to you with pure and clean hearts,
by your Son Jesus Christ our Lord. Amen.