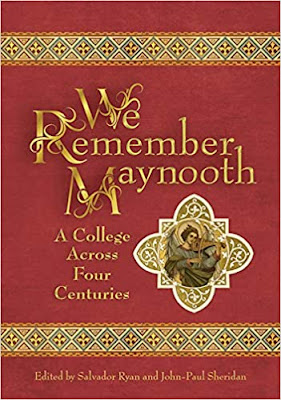 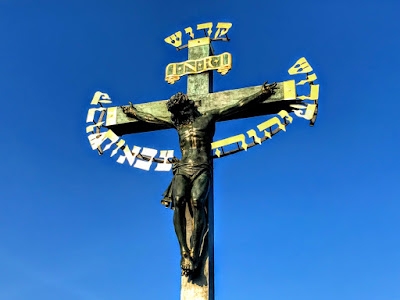 The Crucifix on the Charles Bridge, Prague … the head of Christ is surrounded with verses from the ‘Kedushah’ – and has a backward letter aleph (Photograph: Patrick Comerford, 2019)

In today’s debates about the appropriate place of statues of slaveholders and politicians with extreme views, perhaps some attention should turn towards a statue on the Charles Bridge, one of the best known sights in Prague, the Czech capital.

At first sight, a large Crucifix and Calvary scene might seem appropriate early expressions of Catholic piety alongside the saints that line each side of the 15th-century bridge across the Vltava River.

But all is not as it seems, as I learned during a visit to Prague last year.

In all, there are 30 statues or collections of statues on the pedestrian bridge that connects the Old Town to Prague Castle. They form two rows, one on each side of the bridge. Over the years, many statues have been damaged and many originals being replaced by copies. 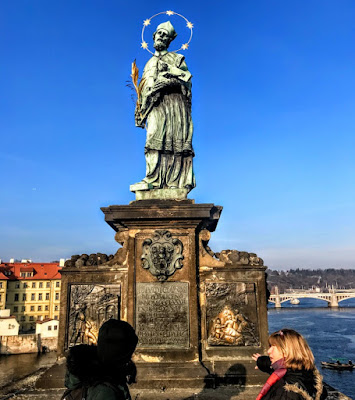 The statue of Saint John of Nepomuk is the first of the many Baroque statues on the Charles Bridge (Photograph: Patrick Comerford, 2019)

The bronze statue is based on a clay model made in 1681 by the Viennese sculptor Matthias Rauchmiller (1645-1686). The sculptor Jan Brokoff (1652-1718) created a large wooden sculpture based on Rauchmiller’s model, which was then cast in bronze in Nuremberg. Rauchmiller’s clay model is now in the National Gallery of Prague.

The statues of Saint Norbert, Saint Wenceslaus and Saint Sigismund on the north side of the Charles Bridge are the work of Josef Max (1804-1855), who was commissioned by the Abbot of Strahov in Prague, Dr Jeroným Zeidler. Saint Wenceslas is the patron of Prague and has another statue on the bridge, Saint Norbert was reburied in Strahov in 1627. 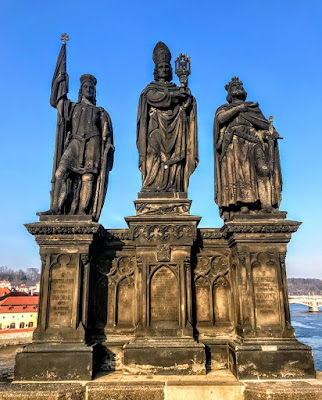 The statues of Saint Wenceslas, the patron of Prague, with Saint Norbert and Saint Sigismund (Photograph: Patrick Comerford, 2019)

However, the one truly cringe-worthy statue on the bridge is a Crucifix that is part of a Calvary scene. The head of Christ is surrounded by the Hebrew words Kadosh, Kadosh, Kadosh, Adonai Tzva’ot (‘Holy, Holy, Holy is the Lord of Hosts’) from the Jewish prayer, the Kedushah. The inscription essentially appropriates Jewish liturgy to tell Jews they should worship Christ as God and in a not-too-subtle way seeks to blame Jews for the crucifixion of Christ.

The Crucifix and Calvary scene is one of the most historically interesting sculptures on the bridge, and it gained its present appearance gradually over many centuries.

The original wooden crucifix was installed soon after 1361 and was probably destroyed by the Hussites in 1419. A new crucifix with a wooden corpus was erected in 1629. but this was severely damaged by the Swedes near the end of the Thirty Years’ War. The remnants of this crucifix can be found in the National Museum in Prague.

The second crucifix was replaced by another wooden Calvary which, in turn, was replaced with a metal version in 1657. This crucifix, bought in Dresden, was originally made in 1629 by H Hillger, using a design by WE Brohn. Two lead figures were added in 1666, but these were replaced in 1861 by the present sandstone statues by Emanuel Max of the Virgin Mary and Saint John the Evangelist.

The controversial part of this composition is the gold-plated lettering which Elias Backoffen, a Jewish community leader, was forced to pay for in 1696 as a punishment for an alleged blasphemy by a Jewish businessman.

As his punishment, Backoffen was ordered to raise the funds to buy the gold-plated Hebrew letters that were placed around the head of the statue, spelling out ‘Holy, Holy, Holy, the Lord of Hosts,’ the Kedushah, the solemn Hebrew prayer incorporating verses from the Book of Isaiah, the Book of Ezekiel, and Psalm 146.

The Kedushah is traditionally the third section of all Amidah recitations. In the silent Amidah, it is a short prayer, but its public repetition is considerably lengthier and requires a minyan or quorum of ten Jewish men over the age of 13. The prayer incorporates three Biblical verses:

All three of the verses are recited as part of the congregational response to the cantor. For the first verse (Isaiah 6: 3), it is traditional for everyone to rise to their toes with each recitation of the word קָדוֹשׁ (kadosh, ‘holy’). During the Kedushah of the Amidah, those taking part in the prayer are expected to stand.

Of course, these verses are also adapted liturgically by Christians in the Sanctus and Benedictus at the Eucharist. But this lettering above the Crucifix is pointedly in Hebrew, and so the city fathers of Prague were appropriating one of the most sacred quotations in Judaism in a public effort to humiliate the city’s Jews with a reminder that they would be forced to look on each day as they crossed the bridge.

This has since become a prime example of late mediaeval European anti-Semitism and has long offended Jewish tourists in the city where the legendary mystic Rabbi Judah Loew created the fearsome Golem.

The letter א (aleph) in the word Tzva’ot is backwards, and tour guides once interpreted this as a secret signal to other Jews. In fact, the letter was removed by the Nazis during their occupation of Prague, and when the Czechs who restored the letters after the war made a mistake. In addition, the letter ו (vav) in Adonai seems to have gone missing. 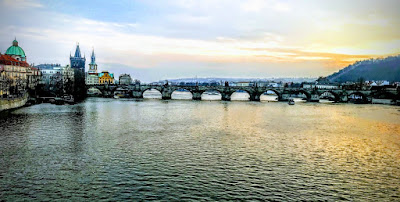 The Charles Bridge is lined with 30 statues or collections of sculptures, and is one of the best-known sights in Prague (Photograph: Patrick Comerford, 2019; click on image for full-screen view)

In recent years, in a long overdue righting of a wrong, the city has added a bronze tablet under the statue, with explanatory texts in Czech, English and Hebrew. The tablet was installed after Rabbi Ronald Brown of Temple Beth Am in Merrick, New York, noted the possibly offensive intention of the text during a visit to Prague.

After three centuries of silently mocking Prague’s Jews, three small plaques – in Czech, English and Hebrew – were affixed on a wall under the crucifix in 2009.

The bronze plaques read: ‘The addition to the statue of the Hebrew inscription and the explanatory texts from 1696 is the result of improper court proceedings against Elias Backoffen, who was accused of mocking the Holy Cross.’

The addition of the Hebrew inscription, ‘which represents a very important expression of faith in the Jewish tradition, was supposed to humiliate the Jewish Community.’ It is signed ‘The City of Prague.’

The texts were the subject of negotiations. An early draft featured much stronger language and called the cavalry scene ‘a witness to the gross disparagement of the idea of holiness.’ It detailed the hostile trial of Elias Backoffen and said the inscription was ‘a result of violence and an attempt to humble a community that worshipped in a different way.’

The plaques were unveiled on 8 March 2000, with about 40 North American rabbis, the Mayor of Prague, Jan Kasl, and several Catholic leaders present. The date was chosen to mark a variety of Christian reconciliation projects advocated by Pope John Paul II and Cardinal John O’Connor, Archbishop of New York.

Jan Kasl, who paid for the plaques himself, received critical letters from local neo-Nazis questioning the move. Some people at the unveiling hoped the plaques signalled improved relations between the city’s Christians and small, struggling Jewish community in Prague.

‘This statue now becomes a monument of the horrors of anti-Semitism and a great symbol of reconciliation,’ said Rabbi Marc Schneier, president of the North American Boards of Rabbis. 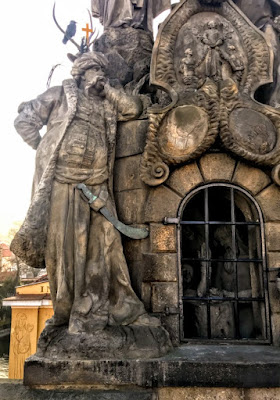 An armed Turk at the base of the statues of Saint John of Matha, Saint Felix of Valois, and Saint Ivan (Photograph: Patrick Comerford, 2019)

As for the other statues on the bridge, the statues of Saint John of Matha, Saint Felix of Valois and Saint Ivan form the most spacious and expensive sculpture. This collection was designed in 1714 by Jan Brokoff’s son, Ferdinand Brokoff (1688-1731), who is known for several statues on the bridge.

The sculpture was commissioned to honour the two founders of the Trinitarians, the order that ransomed or bought back and redeemed Christians held in captivity by the Turks. Saint Ivan, the saint patron of Slavs was added to the group for unknown reasons.

The base depicts a cave in which three chained Christians are praying for salvation behind a grille, watched over by Turk and a guard-dog. 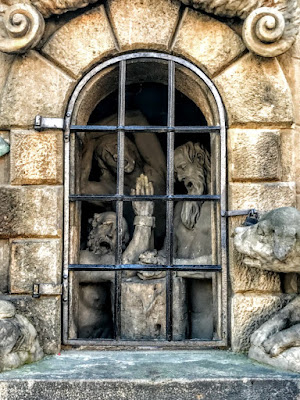 Three chained Christians behind a grille beneath the statues of Saint John of Matha, Saint Felix of Valois and Saint Ivan (Photograph: Patrick Comerford, 2019)