This report and these photographs appear in the September 2015 edition of the Church Review (Dublin and Glendalough), page 19:

The Irish Government has been urged to take a leading role in an international campaign to ban nuclear weapons. Speaking at the memorial for the victims of the atomic bombings of Hiroshima and Nagasaki in Dublin’s Merrion Square, the Revd Professor Patrick Comerford, President of the Irish Campaign for Nuclear Disarmament said “a moral stance by Ireland can be effective” in bringing about change.

Canon Comerford said the “devastating effects of nuclear weapons on Hiroshima and Nagasaki seven decades ago provide a clear rationale for negotiating a ban.”

“Most of these weapons are many times more powerful than the atomic bomb dropped on Hiroshima this day 70 years ago,” he said. “A single nuclear warhead, if detonated on a large city, could kill millions of people, with effects that last for decades and generations.”

“The failure of the nuclear powers to disarm heightens the risk that other countries will acquire nuclear weapons. The only guarantee against the spread and use of nuclear weapons is to eliminate them without delay,” he told the gathering.

He referred to the scene In Steven Spielberg’s movie Schindler’s List, in which Oskar Schindler is presented by the people he rescues with a gold ring inscribed with a quotation from the Talmud that says: “Whoever saves one life saves the world entire.”

This year’s memorial, organised by Irish CND, marked the 70th anniversary of the nuclear attacks on Japan on August 6th, 1945, which killed an estimated 140,000 people in the first few weeks.

The ceremony, held by Irish CND, was attended by the Lord Mayor of Dublin, Ms Críona Ní Dhálaigh, who laid a wreath at the Hiroshima Cherry Tree planted in the park in 1980, and Mr Naoki Yoshimura, first secretary of the Japanese embassy in Dublin.

Mr Yoshimura echoed the call for nuclear disarmament on behalf of the Japanese government. “As the only country to have ever suffered atomic bombings, Japan is making efforts to achieve a world free of nuclear weapons.”

The ceremony also featured performances by Irish and Japanese musicians, a reading by the poet Hugh McFadden, and addresses by the artist Robert Ballagh and the chair of Irish CND, Dr David Hutchinson-Edgar. 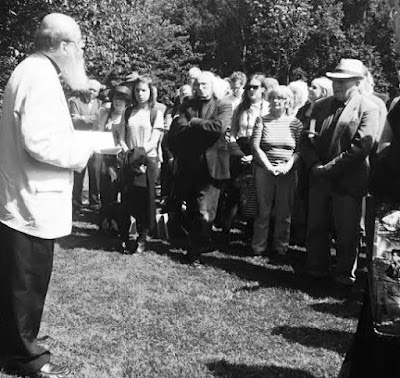 This report and photograph appear in the September 2015 edition of the Church Review (Dublin and Glendalough), page 9: 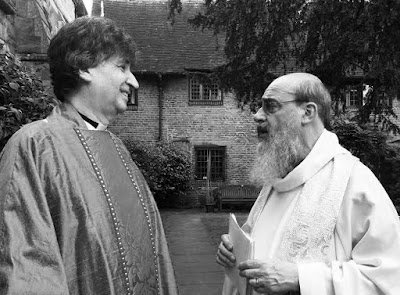 The Revd Canon Professor Patrick Comerford of the Church of Ireland Theological College was the guest preacher at the recent Festal Eucharist in the Chapel of Saint John’s Hospital, Lichfield.

Canon Comerford, who is Lecturer in Anglicanism, Liturgy and Church History in CITI, was preaching at the Festal Eucharist on the Feast of the Birth of Saint John the Baptist, 24 June.

Canon Comerford spoke of the chapel in Saint John’s as his spiritual home. In his sermon he recalled his teenage years in Lichfield, where he has strong family roots and where he began working as a freelance journalist with the Lichfield Mercury.

He recalled how is experiences in Lichfield led to him becoming a journalist and then being ordained an Anglican priest.