A slow setting sun on the beach at Kilcoole 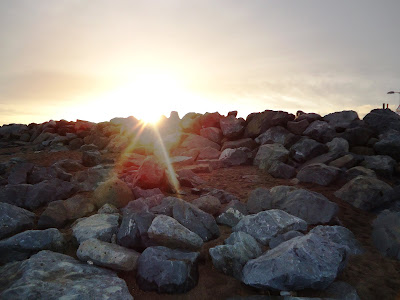 The sun setting behind the railway line and the Murrough in Kilcoole, Co Wicklow, this afternoon (Photograph: Patrick Comerford, 2013)

After ringing in the New Year last night with some friends, it seemed right to go for lunch this afternoon and then go for the first walk on a beach for 2013.

Initially, we thought of lunch in Relish and a walk on the beach at Bettystown and Laytown on the Co Meath coast. But we were wise to ’phone beforehand. Relish was closed today, and we decided instead to head down to Co Wicklow and have lunch at Avoca in Kilmacanogue, near Bray. The afternoon sun behind tall trees at Avoca in Kilmacanogue this afternoon (Photograph: Patrick Comerford, 2013)

The Avoca store, the food hall and the Sugar Tree Café were crowded with young families, obviously looking for something to on New Year’s Day, and parking was chaotic beneath the tall trees in the grounds that were once part of an estate belonging to the old Jameson whiskey family.

We sat to lunch in the Sugar Tree Café in the pavilion-style veranda that leads out onto the garden terrace filled with plants, including orange and lemon trees.

This is the gateway to the Garden of Ireland, and we had a choice of beaches for our afternoon walk: Bray, Greystones of Kilcoole. 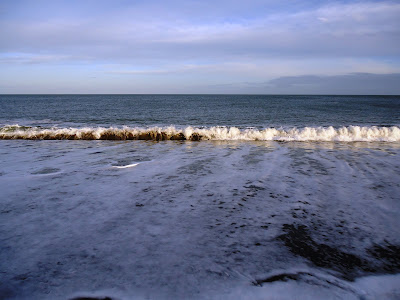 The incoming tide at Kilcoole this afternoon (Photograph: Patrick Comerford, 2013)

We drove out through Killincarrig to Kilcoole, and parked near the railway station. The beautiful coastline at Kilcoole is only accessible by foot from this cul-de-sac which leads through an old rusty gate and across the railway line.

The beach of stone and shingle is also a paradise for bird watchers. We walked a short distance along the wall separating the railway line and the beach. The tide was coming in, and there was a tranquil and peaceful feeling, with a warm glow from the slowly setting sun falling behind the Murrough, the marshland on the west side of the railway line. 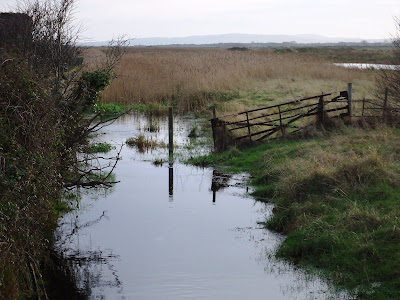 The Murrough is the largest wetland complex on the east coast of Ireland, stretching from Kilcoole south to Wicklow. It has a wide range of coastal and freshwater habitats, threatened plants, a rich invertebrate fauna and important sites for both wintering and breeding species of birds.

Despite its significance, the Murrough is quite small and has been greatly reduced in size over the years, mainly through agricultural drainage in the past.

The Vikings arrived in this part of Co Wicklow in the ninth century, and there seems to have been a Viking settlement on the Murrough, as a richly decorated remnant of a Viking sword was found in there near the end of the 19th century.

Public rights of way at Broadlough and the Murrough have been blocked off by fencing, dumping and obstruction in recent decades, despite a court ruling in the 1970s. But this afternoon this area was a pleasant choice for the first beach walk of the year. 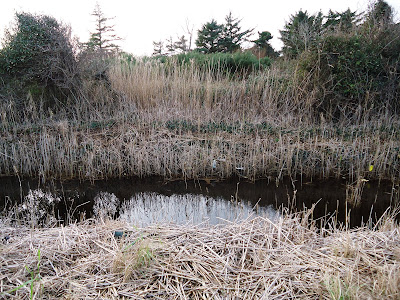 Reeds reflected in the water behind the railway line at Kilcoole this afternoon (Photograph: Patrick Comerford, 2013)

Posted by Patrick Comerford at 18:08 No comments: