A visit to Duleek Abbey and a late lunch in Skerries 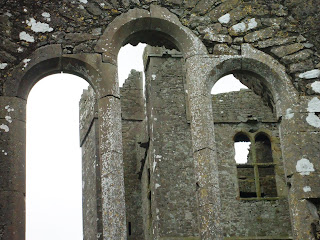 The ruins of Duleek Abbey beside the former Church of Ireland Parish Church (Photograph: Patrick Comerford, 2013) 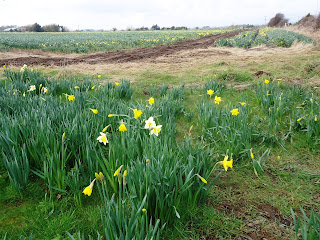 This afternoon, we drove out to Co Meath to see if the daffodils had yet come to full bloom in a large field at Gormanston.

From Gormanston, we drove west up the gently climbing hills to Bellewstown, which stands on the Hill of Crockafotha, with sweeping views to the north to Drogheda, the Boyne and as far as the Mourne Mountains, and out to the Irish Sea to the east. 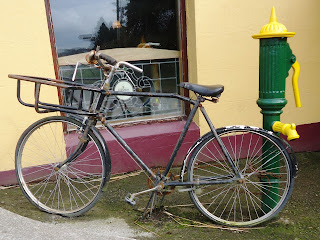 In the heart of Bellewstown, Co Meath (Photograph: Patrick Comerford, 2013)

The Bellewstown Races here were first recorded in the Dublin Gazette and the Weekly Courier in August 1726. In 1780, George Tandy, a former Mayor of Drogheda and brother of James Napper Tandy, persuaded King George III to sponsor a race at Bellewstown – His Majesty’s Plate was worth £100. 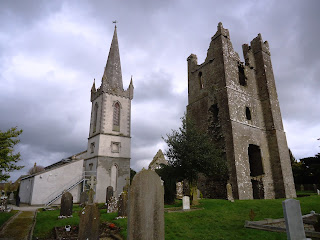 From Bellewstown, we drove on to Duleek, to visit the churchyard of Saint Kienan’s, the former Church of Ireland parish church, and the site of an early monastery. In 1989, Duleek celebrated 1,500 years of the Christian faith in Duleek.

Duleek takes its name from the Irish daimh liag, a house of stones, probably referring to Saint Cianán’s Church, said to have been the first stone-built church in Ireland.

It is said Saint Patrick established a bishopric in Duleek ca 450 AD, and Saint Cianán became the first bishop in 489. A monastery was built on the site, but it was sacked several times by the Vikings between 830 and 1149. In between those raids, the bodies of Brian Ború and his son lay in state in Duleek in April 1014, on their way from the Battle of Clontarf to their burial Armagh. 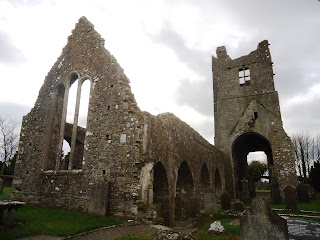 Duleek was pillaged once again by the Normans in 1171. Soon after, however, Duleek Monastery was reconstituted as Saint Mary’s Abbey ca 1180, when Hugh de Lacy, the Anglo-Norman Lord of Meath, granted Saint Cianán’s Church, along with lands around Duleek, to the Augustinians. At the same time, he built a manor and a motte castle at Duleek.

Inside the ruined abbey church are some early cross-slabs, a Romanesque pilaster-capital, and the base and head of the South Cross. 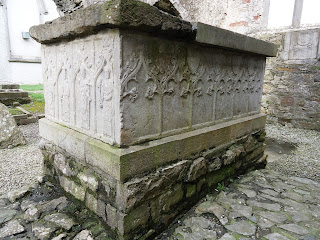 Two tombs inside the abbey church commemorate the Bellew family, who gave their name to neighbouring Bellewstown, which we had visited earlier. One is a mensa-slab, supported by tomb-surrounds, bearing the arms of the Bellew (Bellewstown), Plunkett, Preston (Gormanston) and St Lawrence (Howth) families. The other is the tomb of Lord Bellew, who was killed at the Battle of Aughrim in 1691. 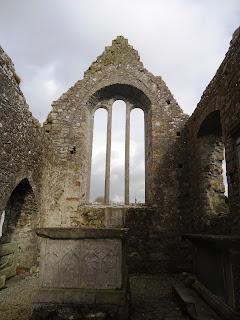 Above these tombs, the east window, a 1587 post-Gothic replacement, with the arms of Sir John Bellew and his wife Dame Ismay Nugent beneath. 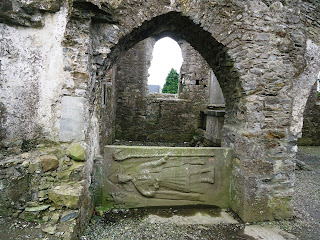 A massive square tower, towering above the 13th century church, was built beside the earlier round tower in the 16th century. Although the round tower no longer stands, the scar where the towers were joined can be seen clearly visible on the northern face of the square tower. 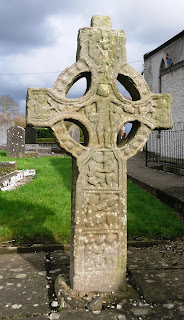 The abbey site has are two high crosses, the oldest of which is the short High Cross, known as the North Cross and probably dating from the 9th century. The North Cross includes elements of many different Celtic themes, such as knots, spirals, mazes. The west face has a number of figure sculptures, including a crucifixion scene and scenes depicting the early life of the Virgin Mary. Another scene may represent the Holy Family, perhaps the Presentation of Christ in the Temple.

On the same face, the top panel depicts an event from the history of the monastery. Adamnan, a monk, visited the tomb of Saint Cianán, and – despite warnings – he touched the saint’s body, and subsequently lost an eye. Adamnan fasted in penance and miraculously his eye was restored.

The south side of the cross contains a winged creature, while the east face and the sides of the cross have some interesting geometrical designs.

The centre of the cross has seven raised spirals believed to represent the dance of heavenly bodies around the sun, centuries before Copernicus developed his theory of the earth revolving around the sun. 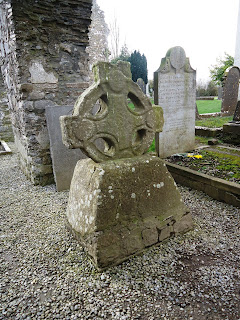 The remains of the South Cross in Duleek Abbey (Photograph: Patrick Comerford, 2013)

A portion of the South Cross can be seen inside the ruins of the abbey church. This sandstone cross head is mounted on a base – not the original – and measures are 90 cm high x 1.05 m arms span x 20 cm thick. There is roll moulding at the edges, a flat cross panel at the centre of the cross head, and four flat bosses at the ends of the arms. 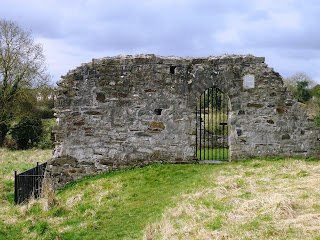 The ruins of Saint Cianán’s Church are to the north-west of the ruined abbey, across a narrow lane. It is claimed locally that this was the first stone church built in Ireland. The earliest recorded stone church in Ireland was built on this site, and is first mentioned in 724.

In the 17th century, Duleek had a significant colony of Huguenots who had fled persecution of Protestants in France. About 250 Huguenot families were engaged in the weaving industry in Duleek prior to the advent of steam looms, selling their cloth nearby in the Linen Hall in Drogheda.

When Saint Kienan’s, the Church of Ireland parish church, was closed and deconsecrated, it was turned into a restaurant named ‘The Spire.’ Today, the windows are blocked and boarded, the door is covered in graffiti and the outside lights have been pulled out of their fittings. 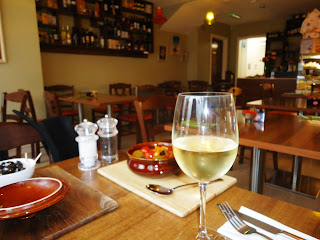 Inside Divino in Skerries this afternoon (Photograph: Patrick Comerford, 2013)

From Duleek, we drove east to Julianstown, stopped briefly at Laytown, and then drove back through Julianstown, Gormanston and Balbriggan to Skerries, where the rain prevented a walk on the beach.

But we had a late lunch in Divino Italian Tapas Restaurant on Church Street. Although Divino recently celebrated its first birthday, the building is much older – a plaque on the side wall recalls that this was Skerries National School in 1834.

Posted by Patrick Comerford at 22:54 4 comments:

With the Saints in Lent (34): Saint Cyril of Jerusalem, 18 March 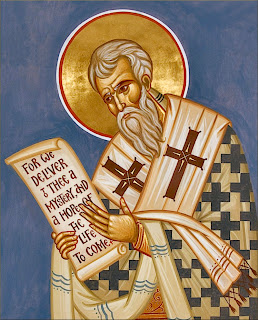 Today [18 March] the calendars of Common Worship of the Church of England, and the Calendar of the Episcopal Church (TEC) commemorate Saint Cyril of Jerusalem. With Holy Week beginning next Sunday, Palm Sunday [24 March 2013], it is worth recalling that Saint Cyril developed catechetical instruction and liturgical observances during Lent, Palm Sunday and Holy Week.

Some scholars say Saint Cyril was born and brought up in Caesarea of Palestine but most say he was probably born in Jerusalem ca 315.

Saint Cyril’s Catechetical Lectures on the Christian Faith, given before Easter to candidates for Baptism, were probably written by him sometime between 348 and 350.

This collection includes an introductory lecture, or procatechesis, and 18 catecheses based on the articles of the creed of the Church of Jerusalem, which are the earliest catechetical materials surviving to this day.

These lectures may have been used many times over by Saint Cyril and his successors, with considerable revisions over the years. They were probably part of the pre-baptismal instructions that were witnessed in Jerusalem in the fourth century by Egeria. She was a pilgrim nun from western Europe, and she describes them with great enthusiasm in her account of her pilgrimage.

Saint Cyril’s five Mystagogical Catecheses on the Sacraments were intended for the newly baptised after Easter. However, they are now thought to have been revised or even written by Bishop John, Saint Cyril’s successor as Patriarch of Jerusalem from 386 to 417.

Saint Cyril was probably responsible for instituting the observances of Palm Sunday and Holy Week as his time as Patriarch of Jerusalem was coming to a close. He took practical steps to organise devotions for countless pilgrims and local inhabitants around the sacred sites in Jerusalem. In time, as these pilgrims returned home from Jerusalem, these services were to influence the observance of Holy Week throughout the Church.

Saint Cyril attended the Second Ecumenical Council at Constantinople, in 381, and died in Jerusalem on 18 March 386.

In 1883, Saint Cyril was declared a Doctor of the Church by Pope Leo XIII.

Strengthen, O Lord, the bishops of your Church in their special calling to be teachers and ministers of the Sacraments, so that they, like your servant Cyril of Jerusalem, may effectively instruct your people in Christian faith and practice; and that we, taught by them, may enter more fully into the celebration of the Paschal mystery; through Jesus Christ our Lord, who lives and reigns with you and the Holy Spirit, one God, now and for ever. Amen.