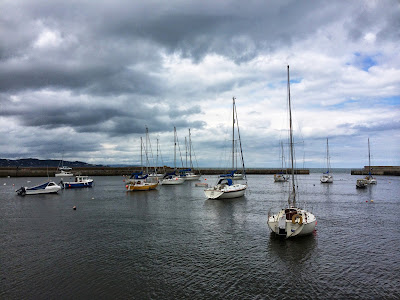 For 40 years – since 1974 – the first Monday in June has been observed as a public holiday in the Republic of Ireland.

It is generally marked by marathons, mini-marathons and fund-raising fun runs in aid of charities. The two biggest events this year were the Cork City Marathon this morning, and the Women’s Mini-Marathon in Dublin this afternoon. But this is also a weekend for special offers in hotels, and the first outing to the beach and seaside resorts for many young families.

The day is still known to many people as Whit Monday although Pentecost depends on the date of Easter and Pentecost or Whit Sunday this year does come round until next Sunday, and next Monday is going to be an ordinary working day.

The day after Pentecost was traditionally a holiday known as Pentecost Monday or Whit Monday and became a public holiday with the passing of the Bank Holidays Act 1871. The idea was to give people the opportunity to attend extra church services and to organise local fairs and cultural events to mark the beginning of the summer season.

However, Whit Monday came to an end with the Holidays (Employees) Act 1973. A new holiday was carved out for the First Monday of June., and this new holiday was first observed 40 years ago in 1974. A similar change was made at the same time in the United Kingdom, but the last Monday in May was chosen instead. 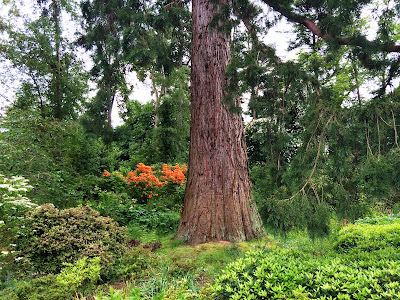 The lush gardens at the Avoca centre in Kilmacanogue, Co Wicklow, this afternoon (Photograph: Patrick Comerford, 2014)
With an extra day off this weekend, two of us drove south first to the Avoca Foodhall and Café in Kilmacanogue, Co Wicklow, to buy this evening’s dinner and to take a short walk in the gardens, where we bumped into two parishioners we met yesterday in Virginia, Co Cavan. 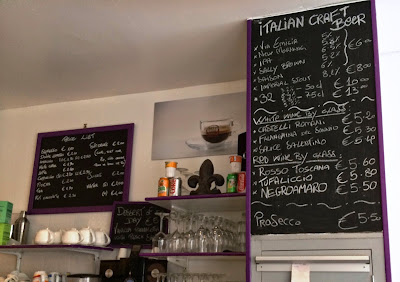 There’s an authentic Italian feeling to Carpe Diem, a new coffee, wine and mozzarella bar in Bray (Photograph: Patrick Comerford, 2014)
From Avoca, we continued on to Bray, for a walk along the promenade and the beach, before having a late lunch in Carpe Diem. This is a new Italian coffee, wine and mozzarella bar on Brennan’s Parade on Albert Avenue, close to the corner with Strand Road and across the street from the Promenade and Sealife.

Rebecca and Tony opened this new Italian café and bar about three or four months ago. She used to run the Gelataria around the corner, and her parents continue to run this Italian ice-cream parlour on the Seafront.

Carpe Diem offers authentic Italian cuisine and is open every day from 10 a.m. to 11 p.m., and the specialities include Piadina, home-made Panini, croissants and pastries. Piadina or piada is a traditional, thin Italian flatbread, typically prepared in the Emilia-Romagna region, and usually made with white flour, olive oil, salt and water.

We had two, filled with goat’s cheese, spinach and roasted peppers, and two great double espressos.

The place is a tiny shop-front, but it makes the best use of the space available. There is an attractive and inviting menu, authentic coffee, and an interesting wine list chalked up on board alongside a listing of the day’s specials.

Gusto Italiano has been closed every time I have passed by in recent months, so it’s a delight to find Bray has a new coffee and wine bar of such a high standard.

Later, we walked back along the seafront as far as the small harbour and Bray Sailing Club. On the tiny beach beside the harbour, families were feeding the friendly swans that live here all year round – including one, lone black swan. 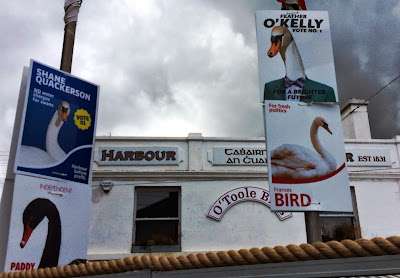 Voting for the Birds at O’Toole’s Harbour Bar in Bray this afternoon (Photograph: Patrick Comerford, 2014)
Across the street on Dock Terrace, O’Toole’s Harbour Bar was once named the “Best Bar in the World” by The Lonely Planet Guide and Trip Advisor rated it the No 1 attraction to see in Bray.

It recently changed hands, but has lost none its attraction. This afternoon, it seemed to be celebrating the local swans and pillorying the recent elections with an interesting collection of posters canvassing votes for Paddy Swan, Frances Bird (For Fresh Politics’), Feather O’Kelly (‘For a brighter future’), Mary White (‘From the Harbour, For the Harbour’), and Shane Quackerson (‘No water charges for swans’).

I wonder whether these posters ruffled the feathers of any local politicians. I imagine they took it with a sprinkle of sunshine and a little holiday humour.

It’s back to work tomorrow – including writing two sermons for the real Pentecost weekend. 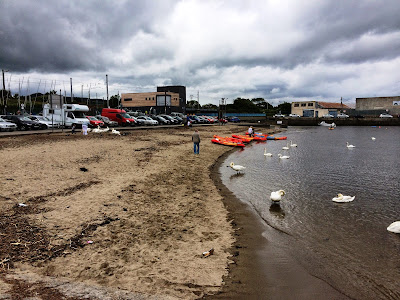 Feeding the swans on the small beach at the Harbour in Bray, Co Wicklow (Photograph: Patrick Comerford, 2014)

Posted by Patrick Comerford at 21:04 No comments: