Wine of antiquity and pizza by the metre 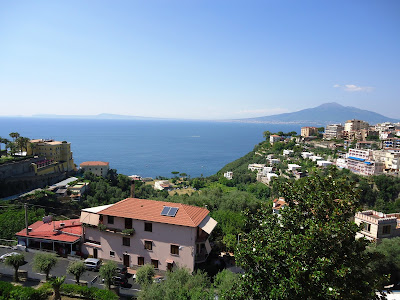 The Grand Hotel Moon Valley in Vico Equense has views across the Bay of Naples (Photograph: Patrick Comerford, 2013)

I have often been amused by the way streets in the Dalkey area are reminders of the Bay of Naples, with names like Vico Road, Sorrento Road, Sorrento Terrace, Monte Alverno, Capri, San Elmo, Nerano ...

HG Wells once described the view from the summit at Sorrento Park as “The finest view west of Naples.”

The saying, “Vedi Napoli puoi muori!” – “See Naples and Die” – was popularised in the 19th century. But I also heard of one grand old dame who used to protest: “I never swim north of Naples when there’s an R in the month.”

Now I am looking at the Bay of Naples for the first time, and seeing the original Vico and Sorrento for myself. I arrived at Naples Airport this morning, and I am staying for the next week in the Grand Hotel Moon Valley on Via Caulino in Seiano di Vico Equense, just 10 km east of Sorrento along the south side of the Bay of Naples. 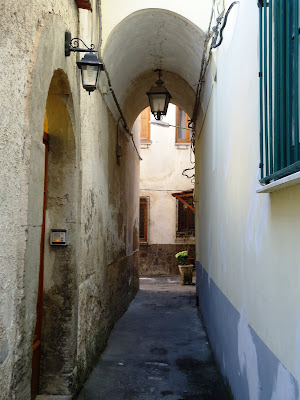 Walking through the back streets of Seiano this afternoon (Photograph: Patrick Comerford, 2013)

The hotel is in the heart of Seiano di Vico Equense, with spectacular views across the Bay of Naples, with Vesuvius looming overhead. The hotel is just off the main coastal road that runs along the Sorrento Peninsula, with Positano just 30 minutes away. Sorrento is just five stops away on the local train service, theCircumvesuviana, and this is a convenient base for visiting Naples, Pompeii and Herculaneum in the coming week.

Vico Equesne is a small resort town at the end of the urban sprawl that spreads out from Naples, sitting on top of a rocky cliff and offering a charming blend of old and new.

Today, the Roman site of Aequa is occupied by Marina di Equa, only 3,000 metres from Vico Equense. Old and new mingle together, with the Villa Pezzolo, dating from the first century AD, the Torre di Caporivo and the vestiges of a Middle Age quarry beside the modern bars and restaurants in front of the pebble beaches.

Here too is the Ristorante and Pizzeria Da Gigino on Via Nicotera, which earned Vico its reputation for selling pizza by the metre. They continue to slice and sell pizza by the length in this giant pizzeria, served daily with a variety of toppings and with takeaways.

Vico Equense may date back to the Etruscans. By the seventh century BC, there was a pre-Roman necropolis in the area, and the place was known in antiquity for its wine.

Later, the place was known to the Romans in Latin as Aequana or Aequa, and some Roman patricians chose this place to build their villas.

A long decline set in after the fall of the Roman Empire. But the place began to flourish again in the late 13th century, when it became independent from the Duchy of Sorrento. King Charles II of Naples repeatedly stayed in the town, and built a castle here in 1301.

The former cathedral or Chiesa dell’Annunziata (Church of the Annunciation), on Via Vescovado in the historic centre, is the only example of a Gothic Cathedral in the Sorrento Peninsula.

Parts of the church dating from the 14th century can still be seen, including the windows close to the main altar and some arches. The church was redesigned in the baroque style in the 17th century, when its pink and white façade was added. Portraits of the Bishops of Vico hang on the sacristy walls, apart from the bishop who favoured the Parthenopean Republic at the end of 18th century and was sentenced to death. Instead, an angel with his fingers to his lips symbolising silence fills his place.

The hills above Vico Equense are scattered with old hamlets or casali that have remained intact for centuries, including Massaquano and Moiano.

And so it’s all before me, below and above ... pebble beaches, lengthy pizza, Etruscan wines, Gothic cathedrals, and a bay that all agree is worth seeing before dying .

During the next week I may even get to see Pompeii, Vesuvius, Positano, the Amalfi Coast, and the isle of Capri.

Posted by Patrick Comerford at 15:26 No comments: