On the ‘FitzWilliam Trail’ in Cambridge 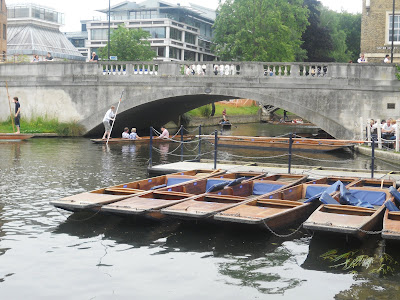 Punts and Silver Street Bridge at the Anchor in Cambridge ... with Queens’ College and the Mathematical Bridge in the background (Photograph: Patrick Comerford, 2012)

After the closing Eucharist at the USPG Conference in High Leigh, Hoddesdon, on Wednesday [28 June 2012], I caught the train from Broxbourne through Bishop’s Stortford and Audley End at Saffron Walden to Cambridge.

On the platform at Bishop’s Stortford, as I was changing trains, there was an interesting map inviting you to walk along the banks of the River Stort through the Stort Valley Way from Bishop’s Stortford to Roydon or Hoddesdon.

In Cambridge, I met an old school friend, Frank Domoney, at Pembroke College, and we had lunch at the Anchor at Silver Street Bridge. Silver Street is particularly popular with tourists at this time of the year and a lively area as they look for punts on the River Cam.

We found a table at the Laundress Lane side of the Anchor on the edge of the river, overlooking the Mill Pond. I had a Vitality Salad (Beetroot, sweet potato, endamame beans, mixed grains, and Sussex cider rapeseed oil dressing £7.45) and a glass of Pinot Grigio.

The Anchor dates back to at least 1864, but it may be much older. It is a good place to relax in the sunshine, watching the punts go by.

On the opposite side of the river stands Darwin College, once the home the home of Charles Darwin’s son, the astronomer and mathematician Sir George Darwin (1845-1912). He lived there for most of his life in what was then the old mill by the Mill Pond.

In The Canterbury Tales, Geoffrey Chaucer begins ‘The Reeve’s Tale’ with these lines:

At Trumpyngtoun, nat fer fro Cantebrigge,
Ther gooth a brook, and over that a brigge,
Upon the whiche brook ther stant a melle;
And this is verray sooth that I yow telle:
A millere was ther dwellynge many a day.

Silver Street Bridge was designed by Sir Edwin Lutyens in 1932, replacing an earlier cast-iron bridge. Before the Fen Causeway was built, this was the only route over the River Cam for vehicles on this side of Cambridge.

On the far side of the bridge, we could see Queens’ College, with Cripps Court to the left, and through the arches of the bridge we had a glimpse of the Mathematical Bridge.

As we walked along Laundress Lane, the Mill Pond the river was busy with tourists and punts. Punts were introduced to Cambridge as pleasure craft over a century ago, and one of the pioneers of punt hire on the River Cam was F. Scudamore, who founded his business at this point on the river in 1910. Today, Scudamore’s owns the largest fleet of punts, with almost 150 craft available for hire along two routes.

‘The Search for Immortality’ ... the current exhibition at Fitzwilliam Museum (Photograph: Patrick Comerford, 2012)

But the main purpose of my visit was to photograph some places associated with the Fitzwilliam name for an essay I want to write later this year. We started with:

● Fitzbillies in Trumpington Street, the famous Cambridge cake shop and bakery, best known for its Chelsea buns. The shop and restaurant were saved last summer by husband and wife Tim Hayward and Alison Wright after it unexpectedly ceased trading.
● The Fitzwilliam Museum, founded with a bequest from Richard FitzWilliam (1745-1816), 7th Viscount FitzWilliam, who had large estates in Dublin, Wicklow and Wexford, and built on lands acquired from Peterhouse.
● Fitzwilliam House, opposite the museum, between the Peterhouse Master’s Lodge and Fitzwilliam Street. This house was built in 1727, and became a lodging house for undergraduates in 1869. It later became Fitzwilliam Hall (1874) and then Fitzwilliam House (1922), taking its name from the museum. In 1960, the house moved to new premises in Huntingdon Road, and became Fitzwilliam College in 1966.
● The Fitzwilliam Pharmacy, next door, on the corner of Trumpington Street and Fitzwilliam Street. The sign over the door says “G. Peck & Son Dispensing Chemists Est. 1851,” but the listed Grade II* building is older, from the early 18th century.
● Fitzwilliam Street, which runs from the Fitzwilliam Museum to Darwin College. The street marks the northern boundary of the mediaeval Priory of the Gilbertine (or White Canons), established on the Trumpington Street site around 1307. Charles Darwin lived at No 22 in 1836 and 1837 after his return from the Beagle. Most of the houses on the street are now used for student accommodation. 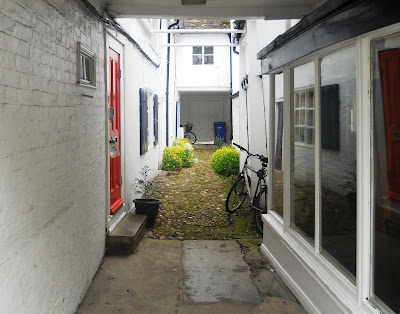 A quiet corner in Trumpington Street, opposite the Fitzwilliam Museum 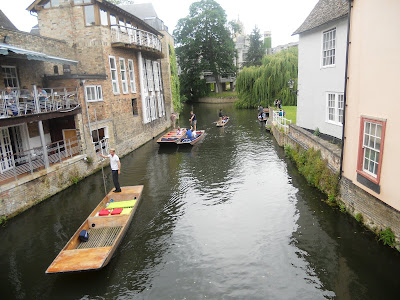 At Magdalene Bridge or “Mag’s Bridge,” we stopped briefly to look again at the punts on the Granta between Saint John’s and Magdalene College. Then we pressed on up Magdalene Street, Castle Street and Huntingdon Road, by Saint Giles’, Kettle’s Yard, the Castle Mound, the Shire Hall, Blackfriars and Murray Edwards College, formerly New Hall, to Fitzwilliam College.

This was the last stop on the Fitzwilliam Trail.

In 1960, Fitzwilliam House moved here to a 3 ha site on land that once belonged to the Darwin family. It is a stark modern building that has been compared to an opulent Middle Eastern palace and described as “a snail’s-shell pattern” and “a riot of sculptural invention.”

I caught a bus back as far as Jesus College, and then walked west along Jesus Lane, by All Saints’ Church, Westcott House and Wesley House, which also houses the Institute of Orthodox Christian Studies, and around the corner into Sidney Street, for a brief visit to Sidney Sussex College.

There was some pleasant but short time left for shopping in Waterstone’s in Sidney Street, spending a book token that came as a gift after preaching in the chapel of Sidney Sussex last February. Then it was back by Christ’s College, Emmanuel College and Darwin College to the train station just in time to get to Stansted Airport for the last flight to Dublin.

Bicycles at the Porters’ Lodge in Sidney Sussex College ... one my last stops on my afternoon walk through the streets of Cambridge (Photograph: Patrick Comerford, 2012)

Posted by Patrick Comerford at 17:47 No comments: