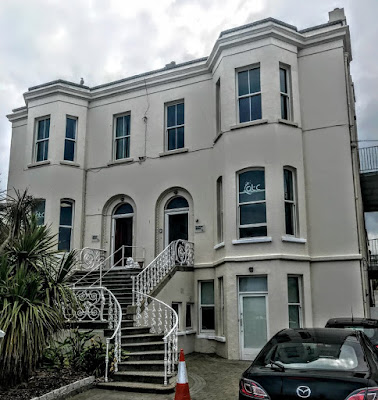 I was writing earlier this morning [13 July 2018] that I find the Victorian and Edwardian domestic architecture in Bray, Co Wicklow, is inspiring.

A fine example of these houses is found in the four adjacent Victorian buildings that are now home to the ATC Language Schools at the south end of Strand Road. 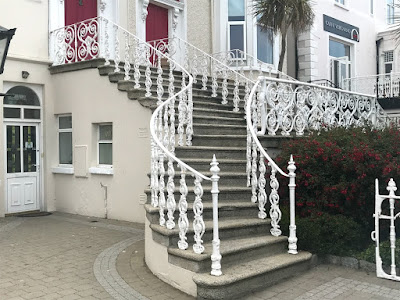 These semi-detached, two-bay, two-storey over basement houses were built ca 1865. Each house is finished in render with a Tyrolean finish and is double-piled.

The paired and curved dogleg stairs rise to the broad shared stairs that rise to the raised ground floors. They have decorative wrought-iron guard rails. 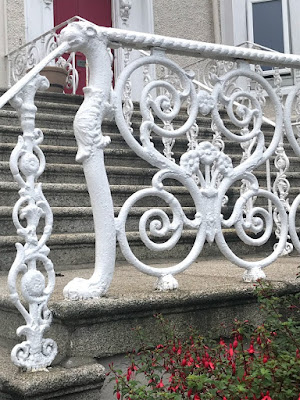 The window openings have segmental arch heads at the ground floor with flat-headed openings elsewhere and have one-over-one timber sash windows. Louvred shutters have been added to the exterior wall surface adjacent to each window.

These are well-preserved examples of early semi-detached houses that recall the Victorian love of the seaside and they form an important part of the promenade’s set of mainly Victorian houses. 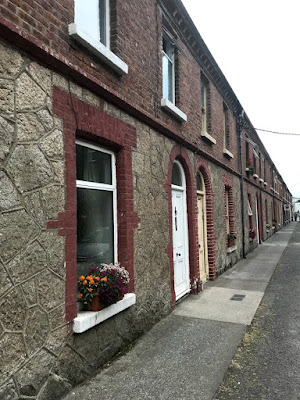 Between the promenade and the railway line, a very different example of domestic architecture from the same decade can be seen in the houses that form Brennan’s Parade, which opens onto Albert Avenue at a point facing Carpe Diem.

This is a terrace of two-bay, two-storey houses, built ca 1860 as 14 uniform mews behind Brennan’s Terrace.

The ground floor levels of the front façades are faced in granite rubble, with raised pointing and painted brick dressings to the openings.

The first-floor levels are in brick with projecting string courses and bracketed eaves courses. The slated roofs are pitched and the houses have shared, rendered chimney-stacks.

Many of the front doors on Brennan’s Parade still have their panelled timber doors and plain semi-circular fanlights in place.

The houses face directly onto a relatively narrow private laneway, and this uniform mews terrace, hidden from the view of most visitors, is something of a rarity in Bray.

Although the houses have no front gardens, colourful flowers have planted along the brick walls facing the terrace, and at the south end there are small bird boxes that aim to make this area a quite and colourful oasis in Bray. 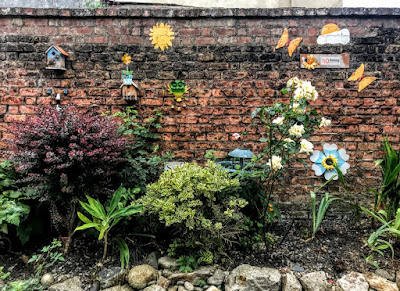 A late lunch in Bray,
a glass of Sicilian wine
and a walk on the beach 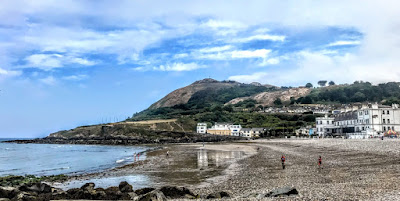 I was in Saint Vincent’s University Hospital at lunchtime yesterday [12 July 2018] for another procedure on a benign growth on my nose. I thought this might be the last in a series of visits, but I have been told I need to return again in about six weeks’ time. These hospital visits have been easy-going in so far as visits like this can be, and I am constantly reassured by the professionalism and attentive car of everyone I meet.

It was 2 p.m. before we left, and two of us decided to return to Bray for a late lunch in Carpe Diem on Albert Avenue and an afternoon stroll on the stony, pebbly beach.

Carpe Diem is one of the finest, authentic Italian restaurants in this part of Ireland, and with a fine range of Italian wines. On Thursday afternoon I had a glass of Regaleali Bianco from Sicily with my lunch.

This was the first wine produced by Count Tasca d’Almerita on the Regaleali estate. It is primarily a blend of three Sicilian grapes: Inzolia, Catarratto, and Grecanico, with some Chardonnay.

This wine is cool-fermented in stainless steel to create a versatile, refreshing, and delicious white of true Sicilian character. It is straw-yellow in colour, and aromas of green apples and pitted fruits complement undertones of pears and grapefruits. It has a crisp acidity and a rich body that make for an easy-to-drink white wine that is particularly refreshing on a hot summer day.

The weather had picked up as we finished lunch and went for our stroll on the beach. I find Bray attractive for its Italian cafés and restaurants, its long beach, its Victorian and Edwardian architecture, and its harbour and boat clubs.

But I was amazed on a bright summer afternoon that Bray still has many of the attractions that I associate with the childhood seaside towns of my childhood and early teens in the 1950s and 1960s.

At the end of a walk back along the promenade, we sat down to ice cream hand-made in traditional Italian style – and a double espresso.