‘With those for whom there is no room,
Christ is present in the world’ … finding
a home for the Spiritually Homeless 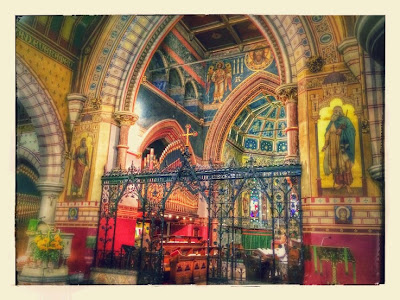 Inside Saint Bartholomew’s Church, Ballsbridge, Dublin … why is ‘traditional church’ appealing to ‘Millennial’ Christians who know what it is to be ‘spiritually homeless’? (Photograph: Patrick Comerford, 2014)

At the end of last week, the Dean of Christ Church Cathedral, Dublin, the Very Revd Dermot Dunne, slept out in the open for the night to draw attention to the work of Focus Ireland and the plight of homeless people in Dublin.

The following morning [18 October 2014], he was interviewed by Marian Finucane on RTÉ and spoke eloquently and with tempered passion about his work with homeless charities in London before he returned to Ireland and ministry in the Church of Ireland.

The problem of homelessness in Dublin has increased dramatically due to the recent economic problems and the austerity measures that followed in their wake. Focus Ireland estimates that about 5,000 people are homeless at any one time in Ireland.

The most recent statistics on homelessness in Ireland are from census night on 10 April 2011. The figures are probably outdated by now, but we can imagine that the problem is getting worse rather than improving. Those figures show 3,808 people were in accommodation providing shelter for homeless people or were sleeping rough. Of these, 62% (or 2,375) were living in Dublin that night, and 644 (17%) were under the age of 20; 15% or 553 people were non-Irish, compared to 12% of the total population.

Focus Ireland estimates at least 87 people are sleeping rough in Dublin on any one night.

The Dean’s big sleep-out began at 7 p.m. on Friday night and ended at 6.30 a.m. on Saturday morning. I imagine he had the prayerful and spiritual support of many of his clerical colleagues in the diocese, and the support of parishes throughout Dublin and Glendalough.

I know many parishes work quietly and gently with homeless people, and many a person sleeping rough has found a safe shelter for a night in church porch or in church grounds.

Of course, a safe shelter is no substitute for a stable home. And at times, I wonder if the people who slept in the church porch on Saturday night presented themselves at the church door on Sunday morning would they find the same warm welcome that I have come to know as a visiting priest with a high profile and a recognisable face.

If – and I am only saying if – homeless people find they are not welcome in our churches and cathedrals throughout the Church of Ireland, then what is the point of priests like Dean Dermot raising funds and raising awareness around this issue?

We remind ourselves liturgically, time and again, that as a community of faith our origins are among homeless people, strangers and sojourners – a wandering Aramaean, liberated slaves who wander in the wilderness for 40 years long, exiles in Babylon who knew that the land was not their home, a homeless couple with their child, fleeing from Bethlehem through the wilderness to the land where their ancestors once were salves, the Son of Man who has no places to lay down his head (Matthew 8: 20; Luke 9: 58) …

The Dublin and Glendalough Diocesan Synod began earlier this afternoon [21 October 2014] in Taney Parish, and I am missing one of the student-organised Harvest Thanksgiving Services. This morning, they collected food and other goods for the homeless in Dublin and to support the work of the Mendicity Institution.

Occasionally, I see people who are dressed or look different having to explain themselves on the way into a church or cathedral. At this synod this evening, I am wondering if the homeless cannot find a welcome in our churches and cathedrals, how we can say they are welcoming homes for the family and children of God. 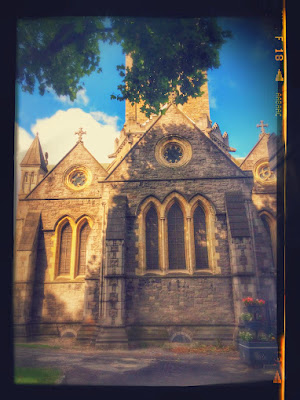 Christ Church Cathedral, Dublin … many ‘Millennial Christians’ have a strong desire to connect to the traditions of the Church (Photograph: Patrick Comerford, 2014)

But there is another form of homelessness that also worries me and that should be of particular concern to all in the Church. Perhaps I should call this “spiritual homelessness.”

There are people who have been pushed to the margins in our parishes because of their differences and their questions. Their questions are regarded as difficult. But these questions do not indicate that they have abandoned their faith. Indeed, perhaps their persistence in questioning shows that they have clung to the faith despite all our moralising and our propensity to being judgemental in the Church.

They are on a journey through a spiritual wilderness. But do we assure them on enough occasions that God is accompanying them on that journey and that there is a “Promised Land” awaiting them.

A survey in the US last year by the Barna Group shows that about 30% of people under 30 have no religious affiliation. Many of them drop out of going to church after having gone regularly, and two large segments of these people say either Christianity just makes no sense to them or they have a bad experience in the church. They turn away as they see how the church treats women and gays and people of different faiths. They have become spiritually homeless.

The good news about this generation of 20 and 30-somethings is their strong desire to connect to the traditions of the church and feel a sense of excitement about church involvement.

They are not at all convinced by the efforts of an older generation of clergy of a particular type to make the Church appear culturally trendy and fashionable. In that, they too are made spiritually homeless when they see what some efforts at “Fresh Expressions” of Church try to offer them.

In their critique of “Fresh Expressions,” Andrew Davison of Westcott House, Cambridge and Alison Milbank of Nottingham University argue for the vitality of the parish, both for mission and for discipleship.

Alison was recently visited the Church of Ireland Theological Institute to speak at a conference on ‘Catholic Evangelism’ organised by Affirming Catholicism. In For the Parish: A Critique of Fresh Expressions (2010), these two theologians convincingly say that the forms of the Church are to be an embodiment of our faith and should therefore be more determined by our theological traditions than by the surrounding culture. They show that the traditions of the parish church represent ways in which time, space, community are ordered in relation to God and the Gospel.

In his book, You Lost Me, David Kinnaman of the Barna Group divides these once church-going “Millennials” into three spiritual journeys, which he labels “nomads,” “prodigals” and “exiles.”

The Nomads are 18- to 29-year-olds with a Christian background who walk away from church engagement but still consider themselves Christians.

The Prodigals are those who have lost their faith. They once claimed a personal faith, but say they are fairly certain of never ever returning to the Christian faith.

The Exiles struggle with the Christian faith and have a tough time finding a place in a church setting. They have chosen to remain within the church but feel “lost” between their commitments to the Church and their desire to stay connected with the world. They often say they remain Christian and continue to go to church, but they find church is a difficult place for them to live out their faith. They want a way to follow Christ in their day-to-day lives.

The report finds millions of Millennial Christians are concerned for the future of their faith. They have a strong desire to connect to the traditions of the Church and feel a sense of excitement about church involvement. A large number say they desire “a more traditional faith, rather than a hip version of Christianity.”

None of these three groups is fully at home in the Church today. They are spiritual exiles and spiritually homeless.

Yet, I was not surprised as I took part in Choral Evensong in Christ Church Cathedral last Thursday, during my week as canon-in-residence in the cathedral, that more than 80 people were present, and that over half of these were in “Millennial” age group, between 18 and 29.

Contrary to the trendy perspective, traditional church worship, with Choral Evensong, including the Readings, Canticles, preces, and versicles and responses made sense to this generation, and they did not need to be spoken down to.

The nomads, prodigals and exiles somewhere other than home. They are travellers, sojourners and spiritually homeless. They seek spontaneity, participation, adventure and relationships, but they often offered featureless programmes and moralistic content. They are more willing to be challenged than most church leaders are willing to challenge them.

What would a Church for the Spiritually Homeless look like in the Diocese of Dublin and Glendalough today? If we abandoned moralising and being judgmental but continued to offer the traditional riches of the Church, what would happen?

In a poem about Advent in Raids on the Unspeakable, Thomas Merton (1915-1968) wrote that Christ mysteriously hides himself in those for whom here is no room:

Into this world,
this demented inn,
in which there is absolutely no room for him at all,
Christ has come uninvited.

But because he cannot be at home in it,
because he is out of place in it,
and yet he must be in it,
his place is with those others for whom there is no room.

His place is with those who do not belong,
who are rejected by power because they are regarded as weak,
those who are discredited,
who are denied the status of persons,
tortured, excommunicated,
with those for whom there is no room,
Christ is present in the world.

He is mysteriously present in those
for whom there seems to be nothing but the world at its worst.
It is in these that he hides himself,
for whom there is no room.