Sipping Samian wine in the oldest port in Greece 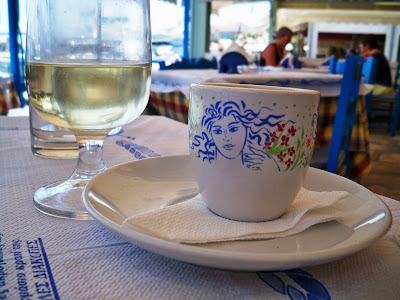 A glass of wine and a cup of Greek coffee in the Pythagóreio Taverna on the harbour-front in Pythagóreio on the south coast of Sámos (Photograph: Patrick Comerford, 2010)

For the past few years, I have visited the island of Sámos each year. Sámos (Σάμος), with a population of 40,000, is the ninth most populous island in Greece. It lies south of Chíos, north of Pátmos, and is a mere mile off the coast of Anatolia, making it easy to reach on a 90-minute ferry hop from the Turkish port of Kuşadasi, where I am staying this week.

For many, Sámos is best known for its Samian wine: it was well-known in antiquity and was enjoyed by the poet Byron, and is still produced on the island.

In the past, I have enjoyed summer days strolling through the streets of the island’s capital and main port, Vathý, generally known as Sámos. Its back streets are charming, its churches are beautiful, its parks relaxing, and its tavernas, cafés and restaurants are splendid.

For years, a favourite of mine has been El Greco, close to the harbour front, is particularly good with its authentic Samian fare (see: http://www.elgreco-restaurant.com/nav.htm). El Greco is run by the Pachymanolis family: Mathew, who was born in Sámos, his Dutch-born wife Wendy, and their daughter and son, Melina and Nick.

Close to the seafront in Vathý, Mathew Pachymanolis and his family serve unique Samiot food in their El Greco taverna (Photograph: Patrick Comerford)

I was back on Sámos on Tuesday [17 August] for the sixth time in five years – and for my third visit to Greece within 12 months.

I returned to Pythagóreio (Πυθαγόρειο), 12 km south of Vathý on the south coast of the island, which I first visited five years ago. This was the island’s capital during the reign of Polycrates, in the 6th century BC. But the name of Pythagóreio honours Pythagoras, the mathematician and philosopher who was born on the island and who gave his name to the well-known mathematical theorem and to the Pythagorean tables. 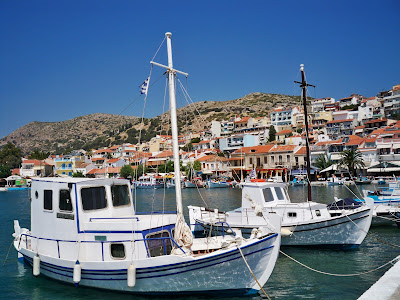 The harbour at Pythagóreio is said to be the oldest human-made harbour (Photograph: Patrick Comerford, 2010)

The town has a population of about 9,000, was known as Tigáni (“Frying Pan”) until 1995, when it was renamed Pythagóreio in honour of its most famous son. But Sámos had other famous residents too: it was the birthplace of the astronomer Aristrachus, the first person in the classical world to realise that the Earth revolves around the Sun; it was home to both Aesop, author of the Fables, and the historian Herodotus; and the Apostle Paul spent time on Sámos before moving on to Miletus to say farewell to the elders of Ephesus (see Acts 20: 15). 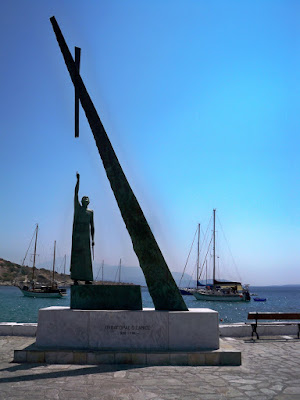 The statue of Pythagoras by Nikolaos Ikaris (1989) on the harbour front in Pythagóreio (Photograph: Patrick Comerford, 2010)

Pythagóreio, which has the oldest human-made port in the Mediterranean, was virtually abandoned during the Ottoman rule of the island, which came to an end in 1912. Today, the town has the largest capacity for tourist accommodation on the island – over 5,500 hotel beds – and has over 60 tavernas and bars. With a bustling marina too, so you can see that this harbour town is at the heart of tourism on the island.

The harbour front, which stands on the site of the ancient port built by Polycrates, is lined with its tavernas and coffee shops, their tables set out under the trees, with local fishermen at one end with their caiques and yachts, making this the very essence of picture postcard Greece.

A modern statue by Nikolaos Ikaris (1989) on the harbour front shows Pythagoras aligned with the catheti of a right triangle, with inscriptions on its hypotenuse, illustrating the Pythagorean theorem.

Just north of Pythagóreio, on the road back to Vathý, I visited the Efpalínio Tunnel, which is a marvel of ancient engineering. This tunnel or aqueduct dates from the 6th century BC, when Sámos was ruled by Polycrates. During his reign, two groups working under the engineer Efpalinos dug a tunnel through Mount Kastro to supply fresh water to the island’s ancient capital. The underground water supply was conceived so that it could not be detected easily detected by enemies who could then cut it off. 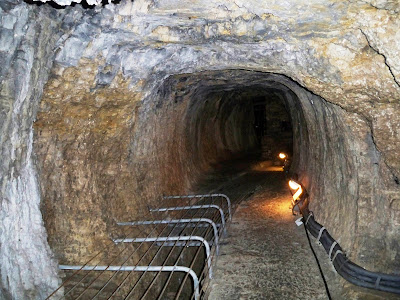 The Efpalínio Tunnel is a marvel of ancient engineering (Photograph: Patrick Comerford, 2010)

The tunnel is a classical marvel, for it is the first tunnel in history to be dug from both ends in a methodical manner. This subterranean aqueduct is 1040 metres long and today is regarded as one of the masterpieces of ancient engineering.

Sámos was captured by the Ottoman Turks in 1533. During the Greek War of Independence, the island had its own revolutionary government from 1821 to 1833, and in 1835 Samos achieved a degree of autonomy. It was governed by a Christian Prince of Greek descent until 1912, when the island was incorporated into the modern Greek state. By then, the capital had been moved from Khora to Vathý.

On the way back to Vathý, the taxi driver overtook a car ahead, forced it to pull in, and openly remonstrated with the driver for throwing a cigarette butt out the window. The people of Sámos have a proud and independent spirit, and are aware of the damage forest fires have caused their environment in recent years ... well done Constantinos! Earlier this month, tourists were evacuated from some parts of Sámos, including Karlovasi and Marthokambos, which is an EU-protected zone, as forest fires burned almost 1,000 hectares in the space of a few days, bringing back memories of recent years when large areas of Greece were ravaged by wildfires.

Back in Vathý, after strolling through the quiet afternoon streets, I sipped a glass of Sámos wine in Boforia, a café at the port, before catching the ferry back to Kuşadasi.