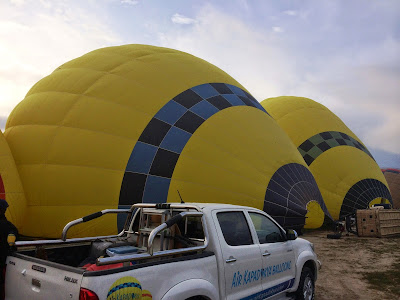 Balloons filling with hot air and waiting for the clearance for take-off (Photograph: Patrick Comerford, 2015)

I have been told an early-morning trip in a hot air balloon is the best way to see Cappadocia, with its strange rock formations, rock-hewn houses and churches and the “fairy chimneys” or “fairy castle.”

Goreme, where I am staying, is the centre for hot-air ballooning, with flights that pass over Goreme Valley, Goreme National Park with its rock churches, the underground cities of Kaymakli and Derinkuyu, Zelve Valley, the ancient cities of Uchisar and the gorge in the Ihlara Valley.

Cappadocia is a region with sensational sunrises and sunsets with an unforgettable landscape. What better way to take in these panoramic vistas and breath-taking than an early morning journey in an open basket, ending back on terra firma with a champagne breakfast?

The experts in adventure were promising serenity in the skies and an experience I would never forget.

I rose at 4 a.m. on Wednesday morning [8 April 2015], and it was still dark and silent when I was collected from the Maccan Cave Hotel at 5 a.m. Dozens of companies are operating from Goreme, and I was booked to fly with Air Kapadokya.

We were registered for our flight, checked-in and offered Continental breakfast. It was a service that Ryanair is never going to rival. Our names were carefully registered and checked … after all, certificates was going to prove our adventurous spirits.

But first there was a delay of 15 minutes. Air traffic control was unsure of the weather forecast for the morning.

Another coffee was needed.

Now it was going to be a 30-minute delay.

We were told to expect good news in another 15 or 20 minutes.

But every balloon operating company was experiencing the same delays.

We were not alone.

Eventually the good news came. We had clearance from air traffic control. We were all piled into minibuses and coaches and were brought to a large field outside Goreme.

Already hot air was filling the balloons on the ground. Baskets for passengers were being shuttled in. Tourists were dancing in front of the brightly-coloured balloons for group photographs and selfies.

The sun was beginning to rise; we might miss the sunrise, but soon, everyone hoped, we would be in the air.

It was all for our own good and safety, I consoled myself. Like security checks at airports, this was for our safety and welfare.

A few months ago, a Chinese tourist died in an accident involving two balloons flying over Cappadocia.

In an incident a week before Christmas, two balloons began to drift in a strong wind as they began their descent, and fell to the ground in the strong wind conditions.

Security forces and paramedics arrived on the scene immediately.

Eleven people – eight Chinese and Malaysian tourists and three Turks – were also injured in the crash.

No-one could doubt whose safety was being cared for with our early morning delays.

But then the sad news came. There would be no flights.

As hastily has we had been brought out, we were brought back to Goreme. 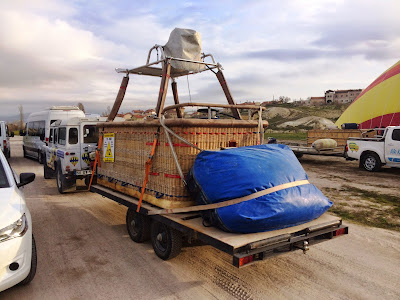 Deflated? ... everything had to be packed up and taken away (Photograph: Patrick Comerford, 2015)

There were no questions. Our money was refunded immediately, and we were brought back to our hotels graciously, without charge and without fuss.

It was a big disappointment, but it was a bigger loss for the balloon operating companies. They had to pay for drivers, for breakfasts, for pilots, for shuttle buses, for staff … all for the sake of our safety.

Would there be another flight on Thursday morning?

Could we rebook for Friday morning?

Oh well, it is better to have travelled in hope than to arrive, or at least to travel in hope and safety than to arrive in danger. Or as the poet Cavafy says:

But do not hurry the journey at all.
Better if it lasts for years,
so you are old by the time you reach the island,
wealthy with all you have gained on the way,
not expecting Ithaka to make you rich.

I live in hope and dream of another opportunity. 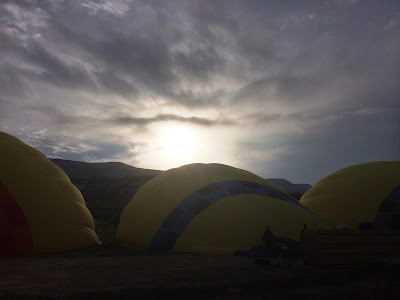