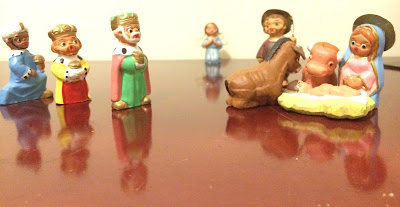 The Magi have arrived at the crib … an Epiphany scene at home (Photograph: Patrick Comerford, 2016)

The Magi have arrived, and we welcomed their arrival in style in Christ Church Cathedral, Dublin, last night [6 January 2016] with a Sung Eucharist for the Feast of the Epiphany.

The choir is back after its post-Christmas break, and the Mass setting was the Missa O Magnum Mysterium by Tomás Luis de Victoria (1548-1611). Canon Mark Gardner, who is canon-in-residence this week, presided and I served the Liturgy as deacon, reading the Gospel (Matthew 2: 1-12), which tells the story of the arrival of the “wise men from the East,” and assisting at the administration of the Holy Communion.

We had some well-loved Epiphany carols, including ‘From the eastern mountains pressing’ (Godfrey Thring), ‘As with gladness men of old’ (W Chatterton Dix), ‘Hail, thou source of every blessing’ (Basil Wood) and ‘Bethlehem, of noblest cities’ (translated by Edward Caswall).

We returned home by another road – well, through Arbour Hill and then backtracking through Crumlin and Templeogue – and noticed how most of the bright Christmas lights that were so visible from early in December have been removed.

Increasingly, it seems, many people in Dublin appear to think the 12 Days of Christmas are the 12 days before rather than the 12 days after. But, of course, Christmas does not end with the Feast of Epiphany, but continues until Candlemas or the Feast of the Presentation on 2 February.

Epiphany is part and parcel of the Christmas celebrations, with two more important Epiphany events to mark liturgically: the Baptism of Christ in the Jordan, which we reflect on next Sunday [10 January 2016], when I am presiding at the Eucharist and preaching in Saint Bartholomew’s Church, Ballsbridge; and the Wedding Feast in Cana, which we reflect on the following Sunday [17 January 2016], when I am back in Christ Church Cathedral preaching and as canon-in-residence. 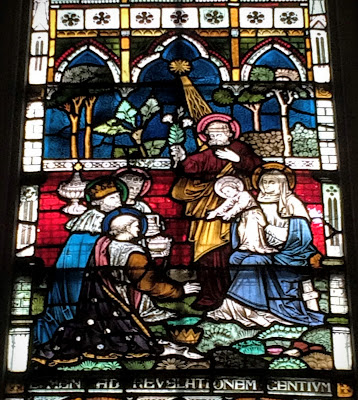