A return visit to Castle Durrow 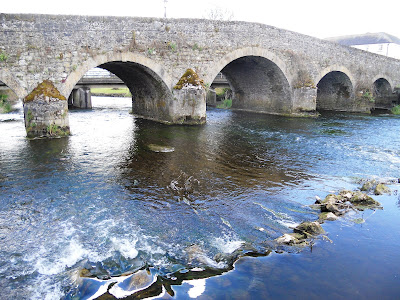 The Bridge over the River Erkina at Durrow (Photograph: Patrick Comerford, 2012)

A few days before Christmas, I was at a fund-raising ball for Christ Church Cathedral in Castle Durrow, Co Laois, and won the last spot-prize of the night – a voucher for midweek dinner, bed and breakfast in Castle Durrow.

And so, I took full pleasure in returning to Castle Durrow last night, enjoying two days in the countryside of counties Laois, Kilkenny and Carlow.

On the way, two of us first stopped in Monasterevin, on the banks of the River Barrow in Co Kildare, where my grandfather’s second cousin, Bishop Michael Comerford, had been parish priest at the end of the 19th century and became friends with the English poet, Gerard Manley Hopkins, who was regular visitor to Monasterevin.

This small town has wide streets and squares lined with elegant Georgian houses, and tree-lined avenues and walkways. It became known as “the Venice of Ireland” because of the river, its many bridges and the Grand Canal, which arrived in Monasterevin in 1786.

From Monasterevin, we drove south and then across The Heath in Co Laois to the Rock of Dunamase, near Stradbally. The Rock, which looks like Mystras in miniature, stands 46 metres high in the heart of a flat plain, with expansive views across the countryside to as far as the Slieve Bloom Mountains. 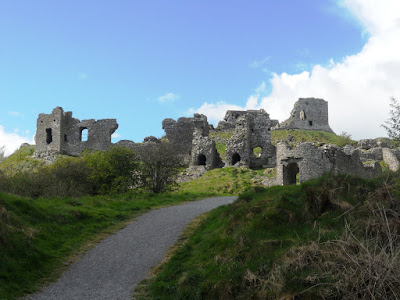 The Rock of Dunamase ... like a miniature Mystras in the Irish Midlands (Photograph: Patrick Comerford, 2012)

The Rock was first settled in the ninth century and the castle at the top of the outcrop was built in the 12th century. Over the centuries, it was owned by the Marshal and Mortimer families, but eventually was captured by local Irish lords before it became a ruined shell in the mid-14th century.

During the Cromwellian wars, it was blown up in 1650 to stop it being used in battle. By the 18th century, it was owned by Sir John Parnell who tried to build a banqueting hall here. But his efforts were in vain, and once again it was abandoned. This is now a mysterious but majestic ruin that captivates the imagination, almost as romantic in its setting as the Rock of Cashel. 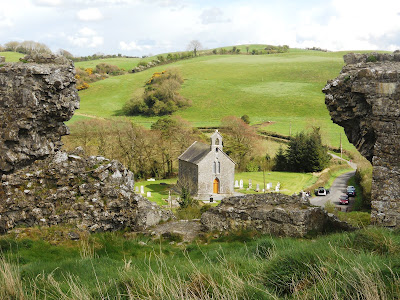 From Dunamase, we drove on to Abbeyleix for lunch. Since the M8 bypassed the town two years ago, Abbeyleix has reclaimed its charm as planned estate town, built by the de Vesci family. As we are all recalling the centenary of the sinking of the Titanic this week, it was interesting to learn that the former carpet factory in Abbeyleix produced the carpets for the Titanic before it set sail in 1912.

The site of the carpet factory is now Bramleys, an elegant interiors shop with an excellent coffee shop. We decided to have lunch there, and were pleasantly surprised by both the attention and the food – without realising that Bramleys is owned by the same couple who own the hotel at Castle Durrow. 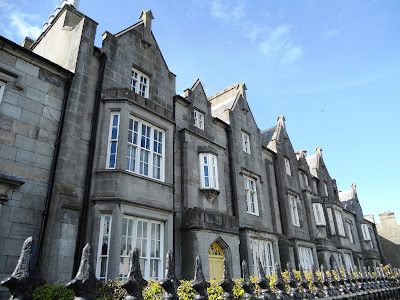 From Abbeyleix, we were only a few minutes’ drive from Durrow, a planned Georgian estate village built on the banks of the River Erkina, close to the point where it joins the River Nore.

The Georgian elegance of the Square at the gates of Castle Durrow (Photograph: Patrick Comerford, 2012)

Durrow celebrated its tercentenary four years ago, although the pub by the river claims it dates back to 1692. The village was redesigned by William Flower of Castle Durrow in 1708, has elegant Georgian townhouses built around a village green in the shape of a diamond and known as The Square, with hotels, coffee shops and Sheppard’s Auction House. 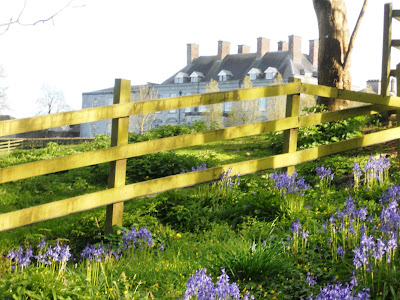 Bluebells in the grounds of Castle Durrow (Photograph: Patrick Comerford, 2012)

We strolled around the village green, through the narrow streets, by the banks of the river, and through the grounds of the castle, with its ageing trees, fresh bluebells, grazing horses and walled gardens. At the end of the drive, a gate leading into the churchyard was half-open, like an invitation into a secret garden. Later, dinner was served in a room looking out onto the stepped terrace.

I awoke before dawn to find a clear half moon streaming into the room, and the garden and terrace below bathed in its moonbeams. 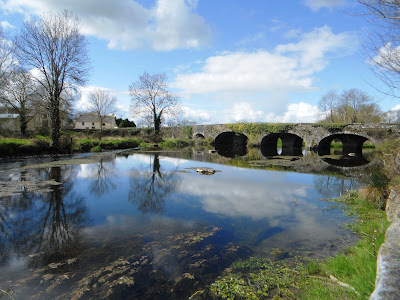 After strolling through the castle grounds and the village once more this morning, we drove down to Kells at midday to see the unusual bridge over the King’s River. The eight-arch bridge was built over the river in 1725 and widened in 1775, and there is a five-arch stone parallel road bridge to the south-east with three elliptical arches.

From Kells we drove past the ruins of Kells Priory, which I had visited last year, then south past the round tower and monastic site at Kilree, before taking a tiny lane down to the hamlet of Danganmore. 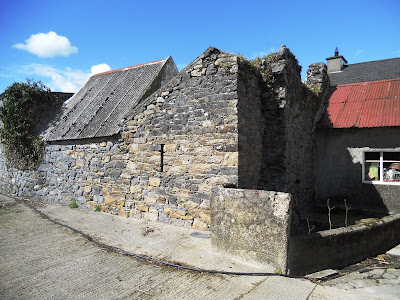 The ruins of Danganmore Castle, once owned by the Comerford family, are incorporated into the Forrestal family home (Photograph: Patrick Comerford, 2012)

In Danaganmore, the ruins of a Comerford castle dating back to the 16th century have been incorporated inelegantly into a farmhouse owned by generations of the Forrestal family. The castle once gave rise to the eccentric Joseph Comerford’s claims to the tile of Baron of Danganmore in the early 18th century. A nearby church and churchyard, where the Comerfords of Danganmore may have been buried, is now desolate and in ruins.

We had lunch in Café Sol in Thomastown, and stopped on the banks of the River Nore to look at Grennan Castle on our way to Inistioge, where we walked through part of the Woodstock Estate, strolled by the banks of river, and checked out the ruined castles before having coffee in the warmly-welcoming café, ‘Circle of Friends.’

From Inistioge, we drove on to The Rower to see the sad ruins of the Church of Ireland parish church, where the Revd Thomas Comerford had been Vicar from 1630 until his death in 1635. 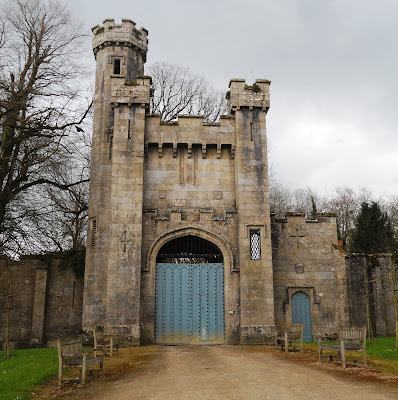 We turned back north, drove along the banks of the river through Graiguenamanagh, and stopped one last time in Borris, Co Carlow, to see the gates of Borris House, the ancestral home of the Kavanagh family.

On the way back to Dublin, through Bagenalstown – which once prided itself in being the “Versailles of Ireland” – and Leighlinbridge there were occasional hailstorms, but every now and then we were rewarded with a full rainbow bursting through the clouds, and views across green and golden fields.

From the “Venice of Ireland” to the “Versailles of Ireland,” these were two joyful days in Easter Week.

Posted by Patrick Comerford at 23:05 No comments:

For my Poem for Easter this morning I have chosen ‘Easter Poem’ by the prize-winning English poet and writer Ted Walker (1934-2004).

This poem was read on Easter Day last year in the Chapel of King’s College, Cambridge, by the chaplain, the Revd Richard Lloyd Morgan, who introduced it simply saying: “The paradox of Easter is explored in the English countryside.” Since then, recordings of this reading have received many hits on YouTube.

This poem is dedicated to Ted Walker’s school friend, John Cotton. Together they had founded a poetry magazine, Priapus, and Walker published some work in the early numbers, which mark the beginning of his poetic career. Key figures who influenced Walker’s literary development included the Welsh poet, Canon Leslie Norris (1921-2006), whom he knew as a canon of Chichester Cathedral.

Walker’s first published poem, ‘Breakwaters,’ appeared in The New Yorker in June 1963. This poem was first published two years later in his first collection, Fox on a Barn Door (1965), which focuses on the Sussex countryside and coast.

Walker also wrote plays for the BBC and adapted Kenneth Grahame’s The Wind in the Willows (1995) for a television animated production with a voice cast including Alan Bennett, Rik Mayall, Michael Palin and Michael Gambon. But for most of his working life (1971–1992) Walker earned a living as Professor of Creative Writing at New England College, an American liberal arts academy with a campus in West Sussex.

commination. In the frail
first light I saw him, unreal
and sudden through lifting mist,
a fox on a barn door, nailed
like a coloured plaster Christ
in a Spanish shrine, his tail

coiled around his loins. Sideways
his head hung limply, his ears
snagged with burdock, his dry nose
plugged with black blood. For two days
he’d held the orthodox pose.
The endemic English noise

of Easter Sunday morning
was mixed with the mist swirling
and might have moved his stiff head.
Under the hill the ringing
had begun. As the sun rose red
to press on seemed the best thing.

I walked the length of the day’s
obsession. At dusk I was
swallowed by the misted barn,
sucked by the peristalsis
of my fear that he had gone,
leaving nails for souvenirs.

But he was there still. I saw
no sign. He hung as before.
Only the wind had risen
to comb the thorns from his fur.
I left my superstition
stretched on the banging barn door.

Posted by Patrick Comerford at 06:00 2 comments: